For the last 25 years, twin brothers Gabriel Bá and Fábio Moon have been writing and drawing comics. With works published across Europe, their home country of Brazil, and the United States, their distinct styles have set them apart from many in the industry with work that is immediately recognizable.

Having worked on books like Dark Horse Comics’s “B.P.R.D.,” Vertigo Comics’s “Daytripper,” and Image Comics’s “Casanova,” Gabriel and Fábio have made a name for themselves in the indie world doing exactly what they love. As co-creators of some of my favorite comics of the last 15 years, I was lucky enough to sit down with them at New York Comic Con and discuss projects, new and old, with a few other odds and ends thrown into the mix. 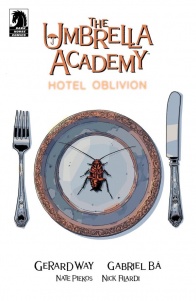 After nine years, how excited were you to come back to “The Umbrella Academy?”

Gabriel Bá: Oh it’s been great. “Umbrella Academy” is one of the most crazy, chaotic, bizarre comics that I work on. And, it’s been a while so I can say that my work and my life was a lot calmer before “Umbrella Academy” and now it’s frantic and exciting. So it’s good! It is great to have the new book out, finally. So people can see it. I am really excited.

As a fan, I have been waiting along with everyone else. After reading the new issue I fell in love with [the series] all over again. So I’m glad it’s back. Now, I know you’ve been somewhat hands-on with the upcoming Netflix series, is there anything you can tell us about that? Are you going to be writing or directing any episodes or do you have a hand in the design work?

GB: Well, they have a bunch of people working on this series and they are all great. I’ve met almost everyone that works on this series, they’re all great writers. I think I met most of the directors – there was a bunch of them, so I was there for most of the shooting schedule for the first year and it was great, a great experience. It is a large scale project. It’s a lot bigger than anything I have ever worked on. It’s great, it’s a whole different thing and I am glad there is someone to do it. You know, Gerard [Way] and I have put in our input every step of the way: the script, the looks, everything, but they know what they are doing and it is going to be great.

Can you tell us what it is going to be based on? Is it a mixture of the previous arcs or a more straight-forward adaptation?

Fábio, what do have coming up? Is there anything in particular you can tell us about? 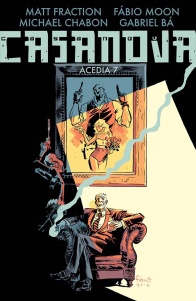 Fábio Moon: Well, I’m still working on “Casanova” with Matt Fraction. We have several issues that are almost ready to be brought out. And we are [gestures to Gabriel] writing and drawing a short Hellboy story for the “[Hellboy] Winter Special.” So that will come out in December. That is what I’m working on right now. We were talking to the editor earlier today. I am drawing most of the story, [Gabriel] is drawing a little bit. We tried to come up with a story for both of us to draw. We always need a narrative reason for a story to have two different drawings. So we have this coming out. It’s probably the only thing I have coming out this year, everything else is long term. Everybody has to be patient.

Well, we will definitely try to be patient. I just got to check out the new hardcover edition of “Two Brothers,” the other day, which is just absolutely gorgeous. I love that story, so I loved seeing that new edition out. Now, besides the obvious theme of two brothers, what else from that story really drew you to the project?

FM: It was, really dramatic. There’s this tragedy, this human tragedy that we don’t usually see [in comics], to have the space to tell this entire timeline of this entire family. You know, every decision they are making ends up effecting and breaking that family down. It’s a very deep, tragic family story, in ways that is not really seen in comics; and we thought it was a perfect story to explore that in comics and it felt great to work on those feelings and emotions and relationships.

At Multiversity Comics, we have Five Questions that we’ve been asking everyone. Just random stuff to break up the monotony. You guys can answer whichever ones you want and whoever wants to answer can go ahead. First one is, if you could swap talents with any other creator in the industry – writer, artist, anyone – who would it be, and why?

GB: I would like to paint like, [David Alan] Sincavage. He is so expressive and crazy. My art is very precise and I would like to have a more loose experience, like I think he does.

Ok, so you’re looking to break some boundaries?

FM I would like to swap with Gerard [Way]. I would like to be a singer. Music can do what we try to do in comics. You have this emotional reaction with people. It’s so fast! One song can reach people so fast. And we can spend years trying to do that with a graphic novel. To have that speed, that immediate contact, connection with people. I would swap with him and let him draw my next books.

What do you guys think is the most underrated soft drink? Like, soda, iced tea, stuff like that.

FM: Oh we don’t drink soft drinks. We hate it, hate it. They taste awful.

GB: Yeah, we don’t drink that stuff, we drink water.

What is one comic that you think all fans should have on their shelf?

If you had a Green Lantern ring, what would be the one construct you would make?

GB: You know, maybe like a drawing board, on a hammock, with this fan moving all the time and a platter to put a cup of beer or coffee. Maybe, that’s it.

FM I was thinking about this clear submarine so it could go underwater and [I] could see the fish swimming wildly. Green submarine/studio.

I love it! And, who is your personal style icon? Who is someone out there, any regular person, any celebrity, that you just love their style?

Perfect. And you, Fábio?

FM: Someone that dresses like Brad Pitt. You know we get confused [for each other] all the time. [laughs] You know, I like suits. I like people that wear suits, ties, vests. It can be anybody.