This year Multiversity Comics had a big presence at New York Comic Con and we know all of you couldn’t be there in person so that’s where we come in. Since relaunching in 2012, Valiant Comics has become one of, if not the, most consistent publishers in the superhero genre. They’ve been doing great things since the relaunch and now Joseph Illidge, a prolific editor who did amazing work with DC and Milestone, is taking over as executive editor. We got the chance to talk with him at NYCC about his new role and what the publisher has in store for 2019. 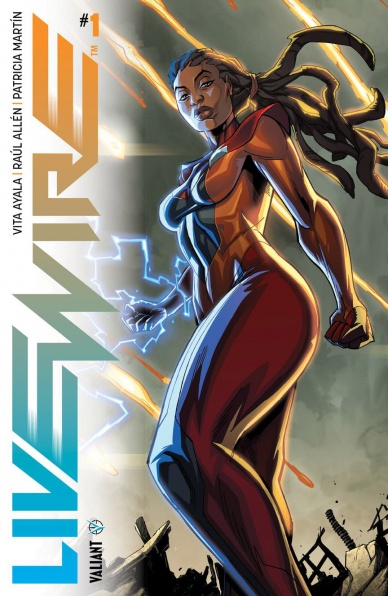 Could you talk about your new role at the company?

Joseph Illidge: As an executive editor, I supervise an editorial team of Robert Meyers, who is our editorial director, Carl Bowlers, our newly promoted senior editor, and Lisa Hawkins who is an editor, David Manchell who is an assistant editor. So the five of us work together to really craft the future of the Valiant Universe to bring amazing writers, artists, colorists, and letterers, veteran voices, new voices, to help shape the growth of the company.

You’ve worked a few different publishers. What makes Valiant so special to you?

JI: I’ve been a fan of Valiant since the first incarnation in the 90s, and then with the relaunch in 2012, I fell in love with the Harbinger title which was written by Joshua Dysart, so I’ve really been here since the beginning. What I really love is the universe is based off of stories that are character-driven. Character-driven stories, the type of stories that you can’t find anywhere else, and it’s a cohesive universe that invites people who have different interests to come and read the books, and that’s something we’re going continue. We’re going to continue to make stories that are gateway stories for new readers as well as continuing stories for existing readers. We’re gonna continue the tradition of finding newer voices in the industry, giving them an opportunity to play in this universe, and elevating newer voices and elevating characters in our landscape, and our company.

You mention that Valiant has so many gateway series, and that’s one of the things that I, as a fan, have always found really great about Valiant books is that you can pick up anything and you can jump right in and you’re good.

Could you talk about any challenges that that may pose compared to something like DC/Marvel where it’s always such a combined universe where everything builds on itself and people are invested in those long stories?

JI: Right. I don’t think it’s a challenge. I think it’s a great opportunity. I think what it does is it means that every story line that you do has to be fresh and it means that you have to understand that every comic book is somebody’s first comic. So every comic is a way to invite people to a narrative, to have them fall in love or hate new characters, or love to hate certain characters, and that’s a responsibility of editorial and working with great writers and creators to make sure that any new reader feels like they can come in right now and it’s not impenetrable to them. It’s actually inviting. So it’s not a challenge, it’s actually a joy.

So can you talk about bringing in new talent into Valiant? Valiant has had a very core group of people for many years now, but with “Livewire” coming out, you’re bringing in Vita Ayala, who is a fantastic writer.

JI: Absolutely. Vita is an amazing writer. I’ve been wanting to work with them for years and they really took to the character of Amanda McKee, LiveWire, and the stories are just amazing. We felt so good about “Livewire” that we elevated it to an ongoing series and I think that really speaks to our confidence in the character, and it speaks to our confidence in the creative team, led by writer Vita Ayala, and the book drops December 19th, and it’s really representative of something that we’ll be doing more with the company going forward is the elevation of certain characters to a higher state in this universe.

One of the things I notice with Valiant, too, is you don’t have so many series going at one time. It’s very manageable as a superhero line.

Is that something we’re going to continue to see where you only have a few books running at one time at any given time?

JI: There will be a level of growth, but the growth will be at a level where, number one, if you want to buy all the books, you can buy all the books, and what we really focus on is one book per character. There aren’t three Bloodshot books. There is one Bloodshot comic. You want Bloodshot, you buy the one comic. Ninja-K, that’s the Ninjak comic. So by doing that, what we do is we’re able to concentrate more on the best story for that issue for that month. And that’s part of what makes Valiant a universe that invites more people is that your eyes will not go all over the place saying, “Okay, which story do I buy of this character?” There’s the one series. That’s where you go for that character.

And now, lots of publishers who didn’t do superheroes before are now starting to do superhero lines. Like Humanoids just announced one. What makes the Valiant superheroes so special compared to everything else?

JI: With the Valiant Universe, the characters, again … It comes down to the characters. If you look at X-O Manowar, he’s a man out of time with an alien suit of armor, but it comes down to the fact that under that armor is a warrior from a by-gone time who is trying to bring a sense of honor to this present time. If you look at Livewire, Livewire is a character who went from being an acolyte to a maternal crusader, and that happened over a period of time. If you look at something like Shadow Man, Shadow Man is about someone embracing their legacy and taking on a responsibility and a greater sense of power. There are the costumes, but underneath the costumes are characters and that is where the real strength of Valiant lies.

JI: Well, one of the things we’ve been talking about in the Valiant Beyond Initiative is Incursion. Incursion is a mini-series that is going to be written by Andy Diggle and we brought on co-writer Alex Paknadel, and so now the two of them are gonna be writing it together. Alex Paknadel has a lot of great work for Vault Comics, BOOM! Studios, Titan, and we’re really excited about the story that he and Andy have crafted, which focuses on the Eternal Warrior, the geomancer, and it’s going to reignite those characters for a new audience and Doug Braithwaite, who is our exclusive artist, is doing some of the best work of his career, and José Villarrubia, one of the best illustrators and colorists in American comics is coloring it and we’re very happy and excited about that. As you may know, we’re heading towards the 30th Anniversary of Valiant which is huge, so we have a lot of big plans and we’re gonna be rolling out news in the coming weeks and months which is really going to speak to the future of Valiant.