Robert Wilson IV can be described as many things. Graphic designer, comic book artists, story teller, and maybe even a heartthrob. At the very least he is the co-creator and artist on the Oni Press comic series “Heartthrob.” The series set in the seventies is about “bank heists and thieving hearts” from Robert and the writer Christopher Sebela. Robert took time at this years NYCC 2018 to talk with us about the series “Heartthrob” and what to expect as they move into volume three. 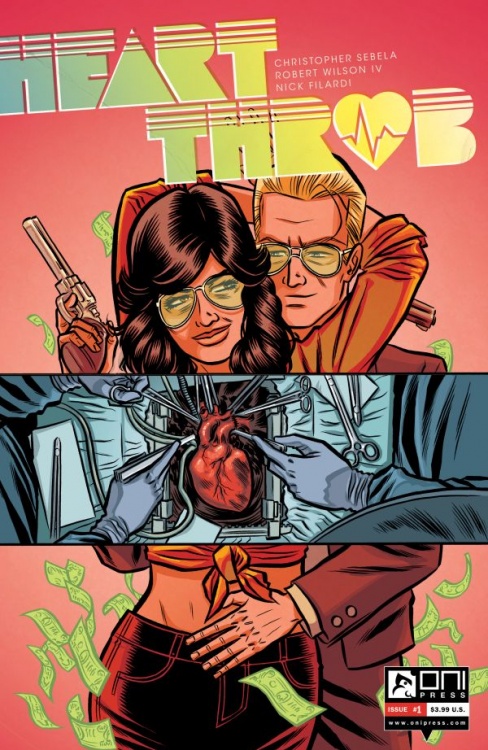 So it’s Friday at New York Comic Con. How’s it been so far? Every year your booth is, like, rocking’ every time.

Robert Wilson IV: Yeah, well thank you. I mean New York’s such a huge and busy show that I feel like, I don’t know. There’s going to be people who are interested in what you do no matter what flavor your work is so, yeah, it’s an exciting show to be at and, you know, it’s fun to be in New York. It’s fun to, you know, to see friends that you only get to see a few times a year and pretty much everyone is here. So, yeah, it’s been great.

And how is it for you? I mean you’re obviously a great sequential artist, but at the same time, you’re an amazing graphic design artist. So as you walk by a lot of your stuff at Con stands out. It’s really great. Do you see a lot of traffic from both types of fans?

RW: Thank you. Yeah, yeah. It’s interesting. And it changes from show to show. I always have people who stop by the booth just because one of my screen print posters caught their eye, or what have you. But yeah, it’s also super gratifying when someone brings a copy of “Heartthrob” or “Bitch Planet” to get signed. Yeah, that’s really cool. And it’s something hadn’t really happened for me much until the last couple years, so it’s, I don’t know, feels like an exciting milestone or something.

Being at a con at some point someone comes up and kinda wants that Con pitch, what would the Con pitch to “Heartthrob” be?

RW: Geez. That’s the hardest question in the world for me.

RW: Well, and I’m so awful at pitching this book, because it has so many kind of different genre elements. But, it’s about a girl who had a congenital heart defect and kind of had to sit on the sidelines of her own life and basically decides to take things into her own hand, sign up for the waiting list to get a heart transplant and when she gets a heart transplant, kind of continues to take control. She meets a guy, they decide to go on a bit of a crime spree, and it turns out maybe he’s not real. Maybe, yeah. I don’t know.

The book for me is really sold on the emotions of the characters, especially with Callie. The first issue is just so crushing and it really comes across in your art. You really sell it.

Obviously, Chris is the master of words, but for you, how has that approach been to the book? To really bring these characters to life? I mean, you do so much with facial expressions, gestures, and getting the characters to act. Is that a real challenge for you?

RW: Sure! Well, thank you, because acting is something I really focus on in general, but especially “Heartthrob.” You know, it can be a challenge, but not so much in that it’s hard to do it, so much as sometimes it’s hard to get in that head space. Right? And can be kind of emotionally draining. Because I feel … I don’t know, you hear actors talk about how they basically will try to put themselves in the mental space of someone who’s going through what their character’s going through, try to take things from their own life or from friends’ lives and relive that as much as they can to capture that in the performance. And I feel like as comic artists, we tend to do that too. And so, when Callie is having a hard time, when she’s getting beat up by life, the hard part is just like, being in that space with her, you know?

Right. I know, a lot of artists use self-reference, taking pictures, using the mirror. Are you doing that a lot?

I imagine if Callie is grimacing a lot like she does are you just spending half your day grimacing in the mirror? I can’t imagine you’re feeling great.

RW: Yeah, well, I can’t help but act out what I’m drawing, too. And I know a lot of my friends are like this. I’ll be sitting there drawing, and I’ll look over at my buddy Joe and he’ll have this snarl on his face. And of course, he’s drawing a Wolverine or something. And so yeah, that’s very much the case.

The book is set in the seventies. And I think one of the impressive things about the book is that the elements of the seventies you reference is so subtle. It doesn’t feel like a seventies book. Is it a lot of reference work for you? How do you kind of balance it  and not just feeling, I don’t know, a cheesy sort of seventies?

RW: Yeah.  I definitely have a huge Pinterest folder of seventies stuff and have a bunch of books that compile Sears Catalog. Like, fashion catalogs. And so, I reference that stuff quite a bit. But I also don’t want the book to be about the period, right? You know, and I don’t want to be a slave to the period, either. You see the cars, you see the hair, you see the clothes, you get it. Right? I don’t need to be a slave to reference or to even real life, because I mean, at the end of the day, there’s some things in this book that are not real life fact you know?

I think as a testament to you and Chris, I remember reading it, and I mean, you get that aesthetic of it, but you’re so engrossed in Callie, that there’s the one part where they talk about, the heart procedure being a new, dangerous thing, and I was like, “This shit happens all the time.”

And then I’m like, “Oh wait, this is set seventies.”

You’re so drawn in by all the characters in the book but you had the additional challenge of drawing someone who’s talking to someone who maybe not be there.

How does that … does that present any challenges to you?

Do you have to plan out staging at all?

RW:: I definitely do, although it’s not necessarily because of Mercer. The main reason why I have to really plan out everything is that there are so many characters and so many moving parts in the story that it’s really easy for me to lose track of where characters are in relation to each other. And if I’m losing track, I know the reader is going to lose track so I have to keep that stuff straight.

There’s some fun action sequences… I love that it kind of devolves into these heist tales. I feel like that’s kind of new stuff we’ve seen from you, a little bit? How has that transition been? Is that fun to do?

RW: Sure. Yeah, it’s awesome. I love doing action and genre stuff and surreal, psychedelic stuff so if we’re able to push into that, the happier I am, generally. So yeah, I love that stuff.

How have you seen your development in the series and how do you feel about the series at this point?

RW: As far as an artist goes, I feel like this is the series that I … I already knew how to draw a comic but this is the series that I learned how to be a working comic artist. You know? Which I feel like there’s a pretty big distinction, because pretty much anyone can draw a comic, but producing … By the time it’s gonna all be said and done, it’s gonna be something close to 320, 330 pages that all sit together, that read as one cohesive thing that didn’t take forever to make. Yeah, that’s a big step for me. Sure.

What can readers expect going forward in the series from you guys?

RW: Yeah, so Volume 3 is going to start fairly soon. I don’t remember the exact date. But yeah, things are getting close to a head. We’re working towards an ending that we had planned out by the end of writing and drawing the first volume so yeah, the pace is kind of picking up. Things are coming to an end.

That worries me, because it’s not been going well so far.