Phillip Sevy is particularly well known for his artwork with Image Comics and Dark Horse Comics on series such as “The Freeze” and several of the in-continuity “Tomb Raider” comics for the 2013-onward video games. He also has performed writing duties on the horror series “The House.”

When it comes to “Triage,” Sevy has considered it to be the project of his dreams, ones he shared with us at New York Comic Con. 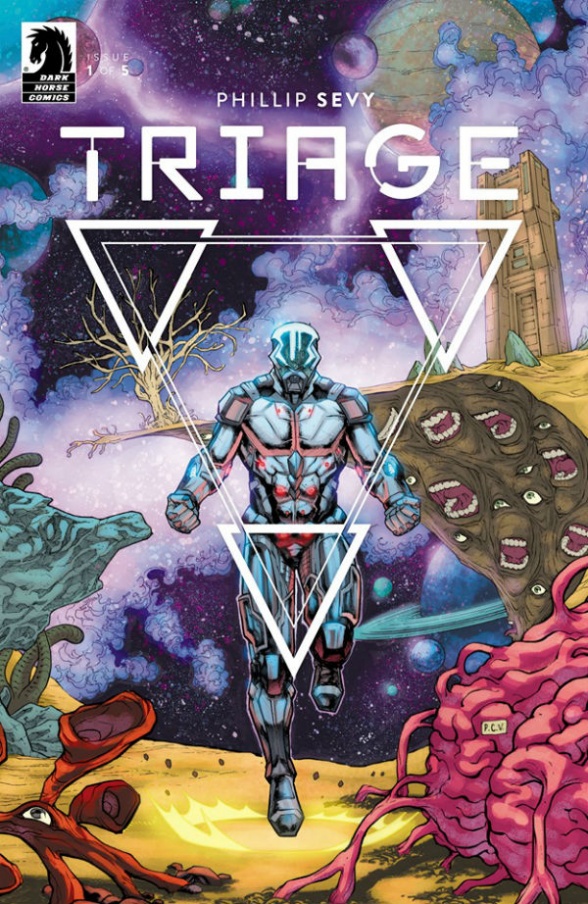 How would you describe “Triage?”

Phillip Sevy: Basically, “Triage” is a sci-fi action adventure book. That’s kind of the genre tag that I do. But as far as the story itself, it’s about a woman who has to team up with alternate reality versions of herself to save the universe. And I can now say that with the first issue being out, I can spoil that twist. So sorry for people reading this, but issue #2’s out, so you can grab it.

I tried to avoid spoiling that in the reviews of it.

PS: I appreciate that. And that was one of the tricky things. And I was even talking with Anthony over here in marketing and was like, how do you market the book without spoiling the twist in the first issue? We had to do lots of work to try and get around it, but it’s out now, we can talk about it. It’s great.

How did you come up with the idea for the series? Any inspirations?

The other was just dealing with some life experiences I’ve had, that Evie shares: the idea of arriving at a certain point and then losing your identity because that’s not what you want, and you have to reconfigure how you see yourself and how you see the world around you. So it was a combination of those things happening in my life, things that have happened, that I’ve been thinking about combined with like, I want to draw a bunch of cool stuff. And it kind of worked its way into this story that became extremely personal to me but also fun and as action adventure-y as I can make the book.

Now that we’ve said why they’re so similar, with the revelation of fact that these are essentially the same person from different areas, can expect more of these different universes beyond those in later issues? Or are we going to concentrate on three or four we’ve seen so far, the fourth being that weird mixture one?

PS: We will concentrate primarily on the main ones from this book just because the world we set up is really, really big and if God willing, we have an opportunity to explore other aspects and coordinates of that world in a future series that will be really fun. But I felt like we needed to get the most impact, we needed to focus on the characters we have at hand.

Anything else you could tell us about this Terminator figure that seems to be hunting the main trio, that’s not a spoiler?

Did anything prepare you for creating this dream project in role of writer, illustrator and colorist all at once? And if so, what did?

PS: Yeah, I did a sci-fi one shot called “Paradox” a couple years ago. And “Paradox” started out as just a fun project to do after I wrapped my first run on “Tomb Raider.” I want to do something entirely different stylistically. I wanted to write it, and I actually colored it and lettered it. I did the whole comic widescreen format. So instead of portrait, it was landscape.

I ended up releasing a page a day for a month at the beginning of 2000, I think was ’17. Then when we got to the end, I had a bunch of friends who were just like, you should Kickstart this and print it. So I did, and it was just a really cool process to work on something and be involved beginning to end. Again, another thing that became very personal in the themes we’re exploring, And it was 32 pages, and it’s going to actually be republished by another company here at the beginning of next year. So that was the first toe into trying to do different aspects

And then obviously one of the projects they worked on shortly after that was “The Freeze” for Top Cow. Dan Wickline was writing, but when Elena Saucedo, the editor, approached me I asked her, “could I do pencils, inks and colors?” So that was the first long term project I had, where I did colors all the way through. And it was super intimidating, but I loved it. So by the end of those four issues, I had done 88 pages of colored work as well.

So all these little things here, like “The House,” the World War II horror book that I did with Drew Zucker. He did the art and I did the writing. So lots of little pieces of different creative aspects, and some doing all at the same time, but they all kind of continue to push me forward in my goal to step into a more of a cartoonist role, where I’m handling the majority of the creative roles on a book.

Anything else you’ve learned through the process of making “Triage?”

PS: I have learned as much as I love it, and it’s super fulfilling creatively, it’s also very exhausting. When I’m working on something like “Tomb Raider,” or “The Freeze,” I could work 14 hours a day before I was like, okay, I gotta take a break, I’m getting tired.

With “Triage,” because I’m so involved in every aspect of it, even as I’m drawing it, I’m rewriting it, and even thinking about how I’m going to color it, and then I’m going to think about like, what information can I give my letterer to make sure we letter this as effectively as possible. It’s this something that I’m constantly reworking every single aspect of it and examining it and making sure it works. My brain feels like it’s going a mile a minute while I’m working on it. So it’s exciting, but come nine, ten hours into a day I’m like, just absolutely shocked. I have to go and just lay down and stare at the wall because my brain’s been working nonstop, harder than it is just drawing a comic or just writing and doing all those aspects.

And knowing if something doesn’t work or doesn’t click for the reader, there’s no one to blame but me. I can’t be like, oh the writer screwed it up, or the colorist didn’t color it the right way. I’ve worked with great writers and colorists, thankfully, so I haven’t ever I’ve never used that excuse. But knowing that I’m shouldering the load of all the expectations. I’m like, if it works, I somehow made it work. If it doesn’t work, that’s 100% on me.

So things like that have made the creative process a bit more tiring than I expected. But it’s not like I wouldn’t do it any other way. “Triage” had to be done this way and I’m loving doing it this way.

Outside “Triage” what other dream projects have you been wanting to deal with next? You’ve done things from “Tomb Raider” ongoing and the more recent “Inferno” miniseries, to “The Freeze,” “The House,” and more. You’ve done lots of different kinds of genres.

PS: Yeah, I’m kind of all over the map. And there’s still some creator-owned projects that I have that I’m developing, that I would love to be able to do next. Time will tell on that one. And then as briefly noticed in “Triage,” I am in love with superheroes and have been my whole life. So to be able to do some stuff for the big two companies, Marvel or DC, would be a cool experience. And hopefully, at some point, I will be able to do that. So the short of it is like fun superhero stuff and get to do more of my own stories as well.

And last, as we turn back to “Triage,” are there any other things you’d like people to know about this series, whether for incoming readers or for those who are already in on it?

PS: So I think one of the things that I love about “Triage,” and that has kept me working on it every day for over a year now, is in addition to like the fun plot elements and sci-fi and multiple realities and superheroes and all this really fun stuff, to me I’m grounded in the emotional journey of the characters.

Our main character Evie goes through an identity crisis in the book where she has reached a point in her life where she’s done all the things she’s wanted to do. She hit all those goals, he’s checked all those boxes and realizes she’s still unhappy. And she has to stop and figure out like, I have defined myself by the set of parameters my whole life, and now those no longer matter, who am I? And will people still like me for who I am, or did they like me because of the things that I was projecting?

So it’s this question of identity, like how do we define ourselves when compared to those around us? Is it even fair to compare ourselves to others? I think having the opportunity of multiple versions of Evie interacting, Evie can very much look like, oh, this version of me is a superhero, this version of me as a warrior. Who am I, how do I measure up to these?

And I think in today’s world, we do that very often as we see the veneer and we see the perfected life that people put on or Twitter or Facebook or whatever it is, and we compare our internal self to the external projections that other people make.

And as we get into further issues, we’re peeling back the layers of Orbit and Marco, the other two Evie characters, to see that yes, they present as one thing, but life is much more complicated and life is much more difficult. And the story is the process of Evie coming to redefine and understand who she is. And that’s the emotional core. And that’s what keeps me going, and that’s what I really hope readers will connect with.

The first three issues of “Triage” are available wherever comic books are sold. Find more of Sevy’s work with the release of “Triage” #4 on December 11, 2019.