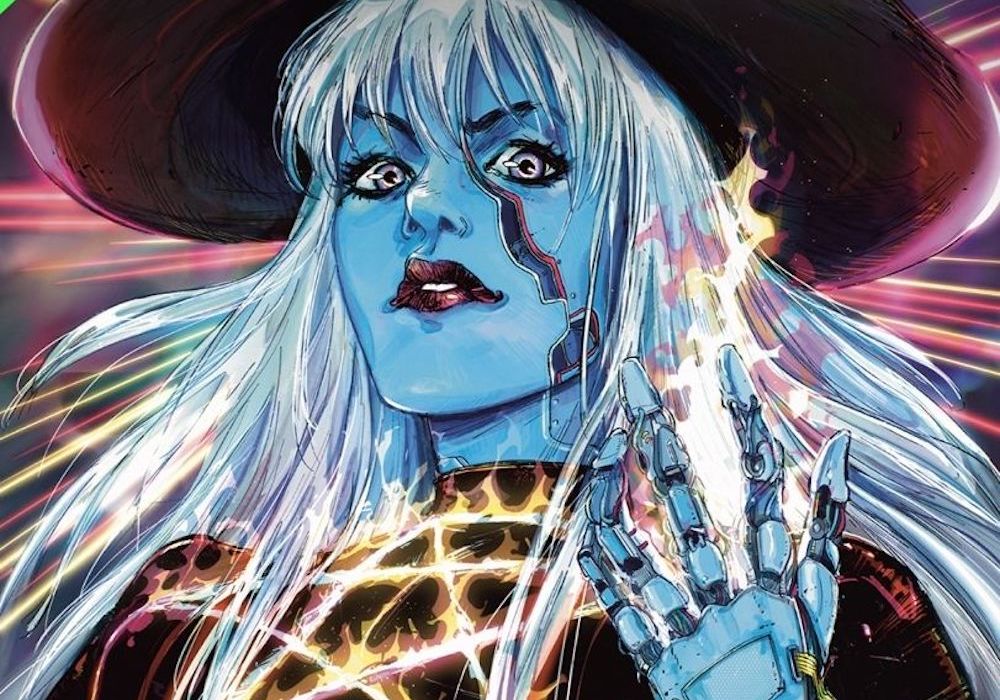 Cyberpunk narratives have been on the rise, among them the Netflix anime Cyberpunk: Edgerunners. Coincidentally, Image Comics announced a new series involving supernatural elements that are directly compared to the video game series Devil May Cry crossed with a narrative akin to a different cyberpunk video game, Cyberpunk 2077. With the series set to come to stores on December 7, writer Tim Seeley took time during his one day at New York Comic Con 2022 to talk about his inspirations, along with what we can expect for this series and gave some glimpses about another of his creations, “Hack/Slash.” 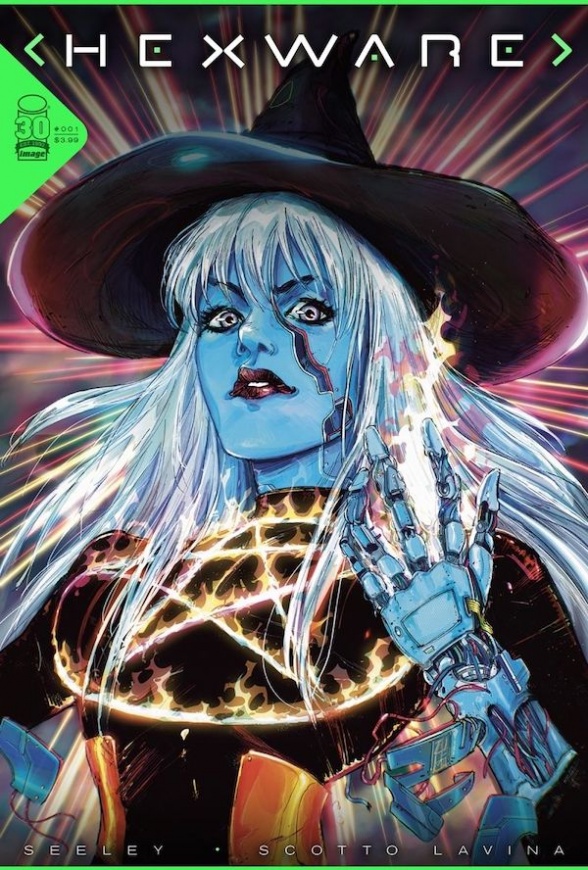 The concept of “Hexware” is billed as a combination between Devil May Cry and Cyberpunk. How far do you think this inspiration goes, considering there are some elements of cyberpunk narratives in Devil May Cry (particularly the reboot timeline and some in the latest, fifth game), and other things like that? How far does that go?

Tim Seeley: I actually don’t know what Devil May Cry is. Is that a game, or…?

TS: I had no idea, but I think the guys at Image picked that. If it’s popular, and people like it and know what it is, awesome. I have no idea. So it wasn’t an influence on me, personally, but…

The big influence on me was basically wanting to do something kind of like the old RPG game Shadowrun. I wanted to do something that was cyberpunk and horror. Kind of instead, like magic and stuff. And also tell a story about the lack of humanity in the future and how that would affect people. So it’s kind of about people trying to get back this sort of humanity after corporations have kind of taken it away.

So yeah, I’m happy to take comparisons to things like whatever Devil May Cry is, I’m into it.

I actually did see some similarities to Shadowrun. I wasn’t sure if that was it. Did you have any inspiration from your earlier works? If so, which ones?

TS: For this project I spent so much time… I was researching Hell. What it actually says about Hell in the Bible. And so, I have a group of stuff that came out at the same time, that’s all from this area of me doing research. So Revealer, “The Roadie,” and “Hexware” are all kind of similar in a weird way, because I wrote them at the beginning of the pandemic, when I was sitting at home researching, like I was looking for something to research. So I read a bunch of books on demonology, what if actually says about Hell in the Bible, and it kind of influenced three very different stories. Those three projects are kind of referencing each other by accident, I think.

Magic takes a lot of different forms in a lot of different media, summoning entities, to throwing forces around, et cetera. Is there any particular method (sorcery, witchcraft, alchemy, any others) that you are using for this series? There is talk of neo-spiritualism and hedge magic, but what angles are you looking at?

TS: Oh, boy. So basically, we play around with stories of possession and stuff. Our character is essentially an android, a house android, in our story just a maid basically, but she picks up all these street religions, and these sorts of things. And one of these things that’s very common in all of these is reaching out to your ancestors or lost ancestors, but also part of that set is also summoning evil spirits. So it’s kind of a combination of stuff we’ve got. Her job, and after she accepts this soul is to get back to these souls who are lost.

So I pulled a lot of figures from mythology that are kind of monsters or characters that all made some deal with some kind of god or devil. All of them are from literature sources, but I kind of hid them in there. So there’s sort of like a werewolf character, sort of like a mummy, sort of like a vampire, but they’re all stories in which someone in the legend or the mythology sold their soul to some evil spirit.

Similarly, there is mention of divinity and infernal entities in what we have seen. How much does religion factor into “Hexware?”

TS: A big part of it is the kind of conflict going on now and will go into the future, which is every time there’s some sort of progress, and it gets toward equal rights for people, there’s always this backlash by people who are afraid of change.

TS: Reactionaries, and they tend to justify it with religion. And that’s true of Christianity, and Islam, and it’s a common occurrence, and it’s happened all throughout human history. So a very big part of this story is the separation of two parts of America: the sort of less spiritual, religious, Christian; and the very hardcore Christian. And that’s a very big part of the story is our country separates along those lines in the story.

So you don’t get to that right away. We start out no one is religious, it’s sort of like a hobby in the city, because all of the sort of hardcore Christians, they’re separated. So when our character finds it, it’s much more novel, it’s sort of a way for people to try to reconnect to this life that they left behind.

From the information we’re seeing, there is talk of a Marks family, and, as you mentioned, Which-Where, the android maid. What can you tell us about the characters of “Hexware?”

TS: Well, the family – I guess I have to tell you about the world a little bit. The story is that there’s a city which is a combination of a bunch of midwestern cities that have been kind of combined into this one giant urban zone, and they’re essentially separated from the rest of America. And we come to understand that there’s been some kind of huge conflict, some kind of war. And so our characters live in the upper levels. And the upper levels are like you can kind of never touch the street. The street is where the more economically challenged people live, and the upper levels are where the people with means live, and they kind of travel around on skyways that connect the buildings. So our family lives in Trump Tower, and it’s now called the Centrist, because Trump is long forgotten, and the family are people of means. They work in pharmaceuticals, and they work in spiritually counseling, and so they got money. And Jesi is their kid. So you very much sort of see from their viewpoint. So when there’s a terrorist attack, they’re the targets of this attack, because they’re people of means. And so it ties all into the story, and I guess it’s way more complicated than I thought it was. But you get the basic idea.

Cyberpunk narratives deal with all sorts of technology. I know about there being androids in the world, but what else can we expect from a technological point?

TS: Well I think part of it is pharmaceutical technology. So we don’t deal a lot… there’s no big computer stuff, all that’s been shut down because of how dangerous it was. So basically we have this society that’s very drugged, because of depression, anxiety, fear… So it’s really like a — we don’t do as much of the, you know, there’s no hackers, or riggers, or any of that stuff that’s usually in cyberpunk, because one of the things I thought was, that would be one of the first things that’s shut down because these are the things that are easily accessed, and would turn against each other, so they’ve kind of gotten rid of that kind of stuff. So the technology is kind of the leftovers of this giant war that happened.

But you did say that there is an android.

TS: Well there’s robots, yes. But they’re not networked. They have androids, but on purpose they make them sort of limited, so they can’t connect to each other. But they use this. It’s sort of another if this disconnect from humanity, that they have these androids that they sort of become like pets in some sort of ways. So most people with means have house androids. There’s also cop androids, they call them ambassador androids. So that’s a big part of the story that we’ll dive into when we get there.

With the release of Cyberpunk: Edgerunners on Netflix, there’s a pretty solid place for anime-style cyberpunk narratives. Did any early looks at the series inspire you in any way for how things could go, or was it basically a happy accident?

What parts of your story do you think can appeal to fans of cyberpunk stories that don’t necessarily have any supernatural elements?

TS: I mean, it’s really the “punk” part, this idea of the counterculture aspects of it. What the people who are under control, what kind of society they build. Also cool outfits, lots of leather, so the aesthetic is definitely part of it.

I’d like to change gears from “Hexware” (no pun intended) and over to another of your properties: “Hack/Slash.” We had the fifteenth anniversary milestone issue in 2019, and “The Crow: Hack/Slash” in 2020, but aside from the newer Kickstarted hardcovers, do you have any stories in the works in that world?

TS: ‘Hack/Slash: Kill Your Idols.’ That’s the serialized story that we’re doing. Six parts, six pages each, in Image Comics’ 30th [Anniversary] anthology, started in issue 5, goes through issue 11. And Stefano [Caselli] and I are working on stuff for it. We teamed up again to do ‘Hack/Slash: Kill Your Idols.’ We had tons of fun doing it, we miss working with each other, so we’re definitely working on more stuff together.

Do you have any upcoming things that…? Unless they are things that you can’t really announce yet.

TS: We just haven’t gotten there yet.

TS: We’re still working it out, still finishing up that last part, part six. So there’s a ton of work. The way we did it was I would try to write a script, but then I would draw six pages, and Stefano would finish and make them better, and we didn’t realize how much work that would be.

Is there anything else you’d like people to know about ‘Hexware” before it comes out in December?

TS: If you like my horror stuff, this is kind of in the realm of stuff I’m clearly interested in. It’s a little bit “Hack/Slash,” it’s a little bit “Revival,” but it’s a lot of this stuff I normally don’t get to do, like science fiction stuff, so I tried to make it all my fears about what would happen. It’s kind of all those things. It’s kind of all my fears of what can happen to America, and to people, and sort of our connections to each other, all that stuff. 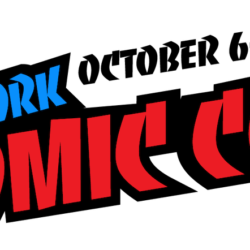 What happens when you put a bunch of crime novelists in a panel? You get a window into the fascinating things that inspired their stories. 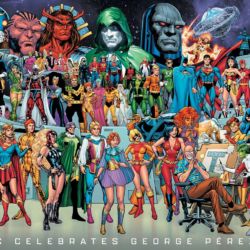 George Perez was remembered at a NYCC panel as a man as kind and lovely as the art he created. 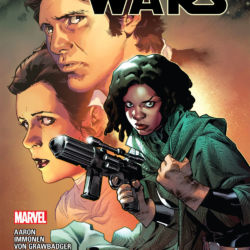 [Header art from “Star Wars” #9 (2015), by Stuart Immonen]At New York Comic Con’s Lucasfilm Publishing panel, the company announced “Star Wars: Sana Starros,” a Marvel Comics miniseries starring the human smuggler of the same name. An artist for the series was not specified, but it will be written by Star Wars book veteran Justina […]