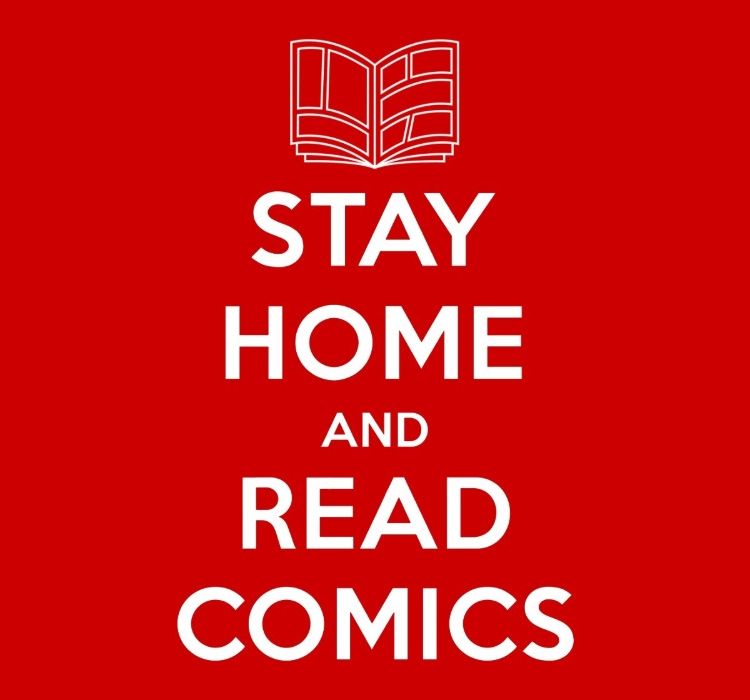 It almost seems like a cruel April Fool’s joke: no New Comic Book Day.  But it wasn’t. It was the reality of April 1, 2020, as COVID-19 continues its assault on the world, shutting down non-essential businesses (which includes comic shops, as much as we would all want to argue otherwise), and eventually, Diamond Comics Distributors. I have to admit, there was a hole in my heart and a pit in my stomach when I couldn’t make my way to Midtown Comics’s website, as I do every Wednesday, to make my shopping list.

But we pivot and we adapt.  As you saw from our site last week, we’ve switched up some of our recurring columns and podcasts, as well as our reviews section, to go retro — looking at stories that may not be brand new, but new to us. It’s a small part of the online movement of New To You Comic Book Day (#NTYCBD) – – finding time in the midst of all our social distancing to (finally) catch up on that big ol’ backlog we may have in our longboxes, bookshelves, and tablets.  And publishers have certainly heeded this call, with everyone from Dark Horse to Marvel and in-between making issues free to find new audiences or have fans revisit their favorite stories.  With the news getting bleaker each day, we need such an escape more than ever. Plus if you’re holding a comic – – any comic – – you’re not touching your face. (But wash your hands before you pick it up.) Read comics, fight COVID-19.  You can’t beat that!

But, finding things can certainly be overwhelming with a plethora of choices.  So, where to start to find those comics?

(I also have to give credit to iFanboy for the “Stay Home and Read Comics” featured image, which you can get on a t-shirt!)

If you have a tablet, smartphone, or computer, services like comiXology, Marvel Unlimited, and DC Universe are great ways to have a universe of comics at your fingertips for a minimal cost.

With Marvel Unlimited, you have access to over 27,000 titles from the House of Ideas, with curated reading lists, and lists of new and popular titles.  It’s far from all 80 years of Marvel Comics, but it does go pretty far back (the earliest issues I found were from the 1940s).  New issues are added six months after they hit the direct market, so as of this writing, titles that dropped in early October 2019 are on Marvel Unlimited. The interface itself could use a face lift, especially when it comes to searching. For example, doing a search for “Dark Phoenix” to find the Dark Phoenix Saga doesn’t bring back any results, even though it’s there as an ‘event’ in the Reading Lists section of the app.  (As a librarian, bad search makes me very out of sorts.) Note as well that you do have limits on how many titles (12) you can download to your device for offline reading. While access starts at $9.99 monthly, Marvel is making several of their iconic stories (including the aforementioned Dark Phoenix saga) free to all until May 4, 2020.

You may know DC Universe for its original TV shows like Doom Patrol and Harley Quinn (and that 1970s Shazam! series that’s so bad it’s good) but there’s also a pretty good selection of comics.  It’s not as many as Marvel (around 22,000 titles), and the lag time for when new issues come on to the service is longer (12 months after publication), but it has certainly made improvements since launch (like no longer rotating comics off the platform). The search function itself is unified across all media. A search for the “Blackest Night” event brings back TV shows, single issues and a curated reading list from the event, entries in the DC encyclopedia, and the app’s news blog.  It’s important to note that DC’s various imprints (Vertigo, Black Label, Milestone) are not part of DC Universe. Access starts at $7.99 per month, with a discount if you purchase 12 months up front.

Right in between Marvel Unlimited and DC Universe in terms of title count is comiXology Unlimited, with over 25,000 titles.  There’s a selection of titles from DC and Marvel, but the service shines for just about every other publisher, from larger premier players such as BOOM! Studios, Dark Horse, and Image, to indie publishers like Abstract Studios, to manga.  Binged Locke and Key on Netflix this weekend? Read the first five volumes on comiXology Unlimited. Curious to try crime comics after our latest Pageturn installment?  The service has the first volume of “Criminal,” “Stumptown,” and “Southern Bastards.” Another perk of membership is that it grants you savings on purchases you make on comiXology, normally around 10-15% off per publisher.  This service is the least expensive of the three, coming in at $5.99 per month, and they’ve extended their normal 30 day trial to 60 days.

Beyond the Big Three

And beyond those big three, there’s plenty other digital services that can open up your comics world.

Having Fun Isn’t Hard When You Have a Library Card!

If funds are tight, thereby making a new subscription service perhaps out of the budget, it’s time to listen to Arthur and check your local library. Many libraries beefed up their digital offerings or enhanced promotion of them, so that while the physical building may be closed, you’re not closed off to books.

Hoopla Digital is a personal favorite of mine, and it’s how I read that very first Doctor Who series at Titan Comics for our inaugural Summer Comics Binge.  A quick check of my Hoopla access via Stamford, CT’s Ferguson Library (one of my home libraries) reveals over 18,500 titles under the “Comics and Graphic Novels” format, from Archie to “Ninja-K” to “Spawn” to “DCeased” and many more.  Depending on your library’s license agreement with Hoopla, you will have a limit of checkouts per month (mine is six) so use them wisely.

Other sources that libraries use for e-books, such as Overdrive, Libby, cloudLibrary, RB Digital, and SimplyE, include graphic novels in their selections. This is also an opportunity to check out within these apps books about comics, such as Why Comics?, Slugfest: Inside the Epic, 50-year Battle between Marvel and DC, or Marvel Comics: The Untold Story. Streaming services such as Kanopy and Hoopla also offer films, so you can check out films about comics and manga, such as Manga Mad or Comic Book Confidential. Those who have access to college or university libraries can get a little intellectual in their social distancing and read some academic works on comics in sources such as JSTOR or Project MUSE. (Full disclosure: I used to work at JSTOR.)

If you don’t have a library card or your card expired, most likely there are staff monitoring chat and phone lines that can help you renew it remotely, or set you up with a temporary ID that you can use until you can come back in the building for your permanent library card.

While some American public libraries have staff in the building offering services such as curbside pickup or mailing home of print books, using the digital offerings from your library community is the safest for both you and for the library staff.

Could There Still Be New Comics?

Believe it or not, there are still some comics being published!  2000 AD/Rebellion continues with their weekly progs and megazines, which we cover in our Multiver-City One column.  You can subscribe to get digital copies right in their app for both titles. If you’re the “try before you buy” type, there’s a small selection of free issues.

The world of manga also continues. Viz’s Shonen Jump posts the latest manga chapters for free on their website each week (and we recap some series in our This Week in Shonen Jump column), and a subscription at $1.99 a month will unlock archived chapters.  (Note: Issue #21, due to come out on April 20th, will now be delayed to April 27th due to a possible case of COVID-19 in publisher Shueisha’s offices.) Kodansha Comics, available on several of the platforms mentioned here, recently announced that they will continue their publishing schedule switching to digital-first and delayed print editions.

And this may be the perfect time to dig into webcomics! There’s several online platforms for webcomics, such as Tapas and WEBTOON, along with creator-hosted websites.  If you’re not sure where to start, you may want to check out our Webcomics Weekly roundup for a few ideas.  Some creators and publishers, such as recently launched AWA Studios and the creative team behind “Ice Cream Man” moved their print operations in some sort of online format.

One suggestion from my boyfriend , a longtime webcomics reader, that will help manage your webcomics, is to set up folders in your browser bookmarks for each day of the week and then put the webcomic links in the folder on the day they update. Each day, open up the bookmark folder for that day and you have all your updates in one place!

Nothing does beat holding a physical book, so if you’ve been neglecting organizing your shelves or longboxes, perhaps now is the time.  And then when that’s all done, just dig in and find a new series – – or revisit an old friend – – that you may have missed in the disorganization.  One benefit to physical books is you don’t have news notifications going off in your face while you’re reading, so if you need to turn off the world for the sake of your mental health, a good physical book is the way to do it.

Support your Creators and Your LCS!

It can’t be said enough that creators, local comic shops, and even smaller indie publishers are feeling the worst economic pinch of all.  However possible, and within your own budgets, if you can buy directly from a creator or publisher, do it. Every little bit helps.  Some publishers such as TKO Presents and Source Point Press, have special sales and/or offer to donate a portion of their proceeds to a local shop of your choice.

If your LCS is still open in some form, and you can safely shop with them, do so. Robert Venditti launched the #PullBoxPayItForward program, encouraging folks to pay off a pull box for someone else so they can get their books and the shop gets much needed revenue.  And there’s nothing stopping you from doing some shopping at your local shop which may be offering things such as curbside delivery or mail order.  Some have even gotten creative to stay open, such as Quimby’s NYC selling books at Crest Hardware (hardware shops are considered “essential” in New York and thus still open), and I swore I saw another NYC-area store joke on social media this week about trying to get on DoorDash by selling soda along with comics.

So whatever route you choose, there’s plenty to read as we ride out this pandemic. And there will be new comics again someday.  But for now, let’s social distance with a good story together (but apart).