We all know that you shouldn’t judge a book by its cover, but…it happens. More than we would care to admit. But that is why the three artists are so celebrated; they give accurate representation of tone to the books they cover. Their work draws the eye to itself, and gives folks a reason to take it down from the shelf and page through it. Keep reading to see what makes these three so special. 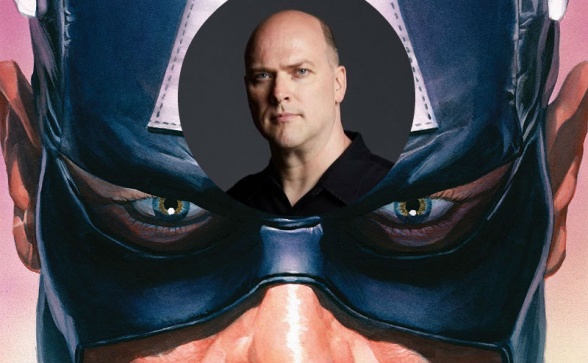 What can be written about Alex Ross’s work that isn’t retreading old ground? Once again Alex Ross’s covers have been selected as one of the best in comic books by the staff at Multiversity Comics. In 2019, Ross continues to provide covers for Coates’s “Captain America” and Ewing’s “Immortal Hulk” runs. He’s also illustrated variants for various Marvel comics including “Fantastic 4” #6 and “Invaders” #1. Marvel celebrated the 25th anniversary of “Marvels,” which Ross co-created with Kurt Busiek, by issuing ‘Marvels’ variant covers for a handful of Marvel’s output and a “Marvels: Epilogue” one-shot (with a reunited Ross and Busiek) in July. In all, Ross had an exceptionally prolific year.

The highlight of Ross’s illustrations is, as always, his figure work. Where many artists rely on busy and bombastic figures fighting or getting ready to fight to introduce an issue, Ross’s figures tend to have a quiet elegance and regality that is awe inspiring. “Captain America” #8 is simply a portrait of the titular Steve Rogers staring at the reader. His expression is hard to read, but the viewer knows that he’s deep in thought. This is aided by the attention to detail from the furrowed brow through the Captain America mask and the quasi-realistic shape of Steve’s eyes concentrated forward. The story Ross’s cover tells is reflective of the events inside the book as Steve grapples with his place in the post-’Secret Empire’ America. The artistic intuition and confidence to introduce readers to this issue with a poignant Steve Rogers portrait is what makes Ross’ covers so evocative and so special.

But where “Captain America” #8 is piercing in its simplicity, the cover for “Immortal Hulk” #17 is a masterclass of scale and composition. The cover for “Immortal Hulk” #17 is scary. An injured Bruce Banner looks away from the viewer to look behind him as a shadowy figure approaches. Banner is holding himself up against an elaborately designed wall while another hand is nursing a wound. Beneath Banner, in the water-filled path, is an abstraction of the Hulk looking up at Banner from the reflection. Ross is known for his detailed figures, but look at the wall and the ripples of the flooded path. I can feel the smooth, bony indentations of the wall. I can hear the drops of water continue to fill the hallway. I can sense the horror Banner must be feeling at the sight of the shadow. Ross’s covers are irreplaceable and any book lucky enough to be graced with his work is all the better for it. – Erik Hyska

Covers are a tricky, overlooked element of design in comic books that artist Julian Totino Tedesco specializes in. Tedesco’s covers are laid out with incredible attention to detail and nearly flawless line-art. Each of Tedesco’s covers for “Daredevil” in 2019 captured important design elements. Tedesco often produces covers which matched the themes of the scripts and interior art. “Daredevil” #9 in particular evokes religious iconography as well as the origins of the character. By looking at a Tedesco-penciled cover alone in most contexts, readers are able to make an informed guess at the content within the issue. There’s also something about the lenky, enigmatic poses of Tedesco’s designs that immediately capture my attention. Tedesco’s artwork is so malleable he was able to fit two superhero properties together effortlessly in covers for “Black Hammer/Justice League: Hammer of Justice!.”

Tedesco’s cover for the second issue blended a dark background with an ensemble cast of characters striking versatile poses. John Stewart’s Lantern Ring offsets some of the crowded design elements on the page. One of my favorite contributions from Tedesco this year was his variant cover to “Conan the Barbarian” #6. The image is simplistic and features a barbaric Conan pose that emphasis Tedesco’s command of body language. Tedesco’s slightly distorted figures bring out surprising elements of design. Tedesco frames the panel in a manner that captures all the right details. Tedesco’s work is prolific as well. In 2019 Tedesco worked for a range of different comic book publishers. I bet most fans reading Big Two comics in 2019 have appreciated a Tedesco-drawn cover at some point. I also have a feeling that Tedesco’s streak of incredible covers is going to continue into the new year after taking a peak at the upcoming “Daredevil” #14. – Alexander Jones 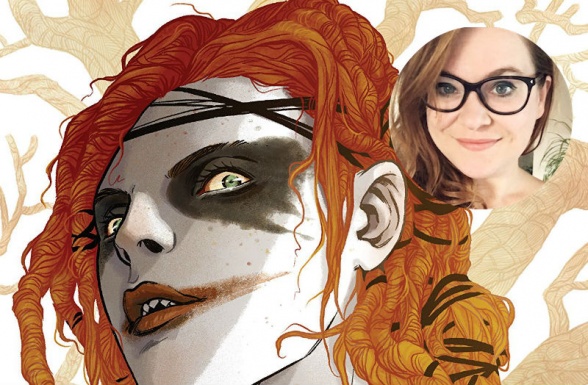 Becky Cloonan created a sizeable body of work in 2019. Though lot of it tangential to comics including pins, T-shirt’s, album covers, an inktober comic, a full comic or two, personal projects and commissions, thankfully a notable bit of it was a group of stunning covers.

Her always eye catching artwork is a draw I usually can’t resist and has sold me on books that I might have passed on otherwise. One such case were the covers she created for the Image Comics Series “Reaver.” The haunting portraits she created for the covers were the hook that made me buy the book and each manage to communicate something about the characters they feature. Her mix of subtle design elements, and experiments with color palettes and textures made solid series of character studies that add to the story being told by Justin Jordan, Rebekah Isaacs and Alex Guimarães. Though unique they are graphically linked and consistent across the issues. Her cover for issue one showing the diminutive skin-eater, Rekala, and her soul deep stare still lurks in my mind.

Her other covers this year showed the range in her clean boldly inked art style. Her work can vary from the cute and oddly appealing of her “Doom Patrol: The Weight of Worlds” and “Calamity Kate” covers to the moody atmospheric of “Wolverine Exit Wounds” and “Fight Club 3” variants and the odd allure of the “Faithless” adult variant.

She also created a new cover for the collection “By Chance and Providence” from 2017 bringing together her horror comics from a few years back a second time. This really shows her range from the realistic to the stylized in her artwork. Her work haunts me in the best way possible.

Next year also looks to be starting strong. She will be providing at least one cover for the “Best of 2000AD” with a gorgeous Judge Dredd image. She’s also writing a Marvel series called “Dark Agnes” based on a lesser known Robert E Howard from his “Swordswoman” stories, joining Merveks growing list of Robert E Howard related books. – Greg Lincoln

A Celebration of Dick Grayson’s Ass. Yes. We’re doing it.