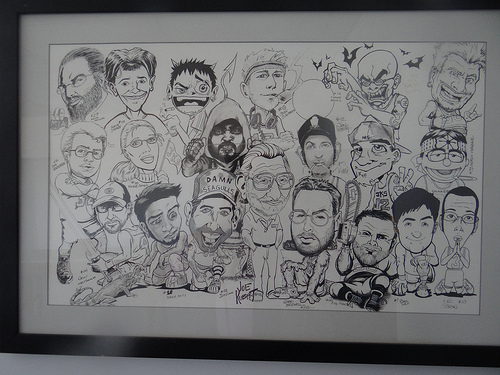 Back in July, I had the opportunity to take a trip to the Kubert School in Dover, New Jersey. I brought along my camera, and tried my best to document the trip. I hope you enjoy your virtual tour through the Kubert School!

The school, itself an old high school, looks like any Catholic school you’ve passed driving through your local town. In fact, if it weren’t for the sign out front, it would be quite hard to peg this as anything other than a high school. 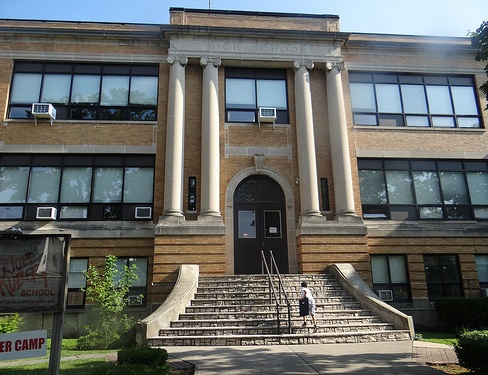 When you walk through the front door, however, it becomes apparent just where you are – a place where comics are king. On the desk that welcomes you are a stack of mid 90s-mid 00s comics from a variety of publishers, seemingly chosen at random to greet you. In many of the rooms I toured, from the guest reception room to the rec room, there are comics just like this. Instead of a two month old issue of “Sports Illustrated” you flip through at the dentist’s, here you get “Web Of Spider-Man #37” or “Countdown to Final Crisis” #6. 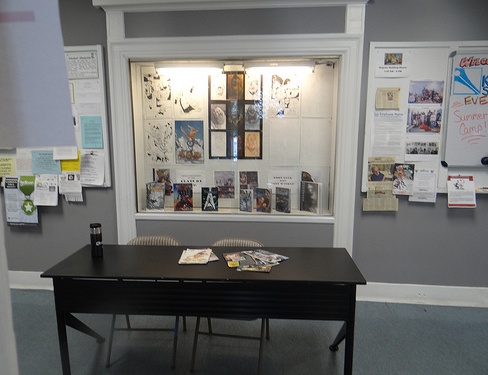 Behind the desk is a display case of artwork from the Class of 2013, the latest group of now Kubert alumni. To either side of the case is work of the two classes beneath them, and I must say, some of the work is stunning.

As you walk through the halls of the school, there is original art everywhere. I commented to Mike Chen (with whom I spoke at length) that all of this art could make up a museum. He didn’t disagree.

It took a lot of resolve to not snap a pic of every piece of art I saw, but I did my best. Some highlights included original “Archie” strips, ads Joe Kubert did for various magazines, lots of Adam and Andy Kubert work, and lots of work like these original Joe Kubert covers.

When I first arrived, I camped out in a reception room, where I was greeting with glorious air conditioning, and more incredible artwork. What separates this artwork from other pieces you’ve seen in the past is the history behind it, which is sometimes included as part of the piece. 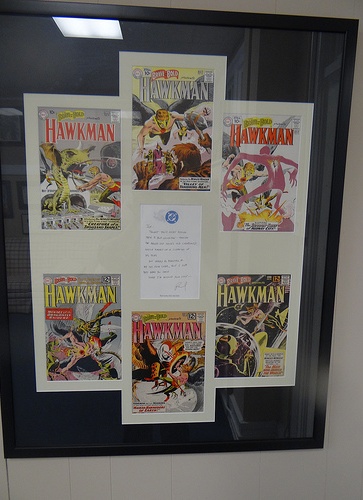 There are a series of Hawkman covers, presented to Joe by Paul Levitz, whose note was framed in the middle. 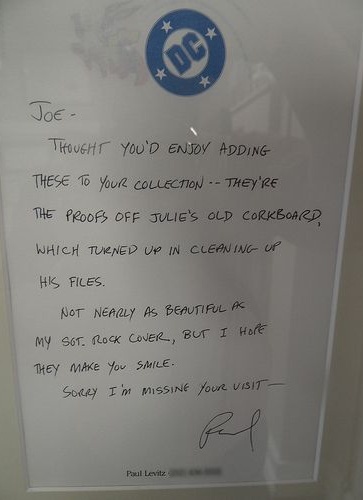 Little touches like that make the school come alive, and also make Joe Kubert more than just the name on the school building, but imbue the school with his presence, a year after his passing.

The school also has a lot of very funny things sprinkled throughout. Take, for instance, the door of the women’s bathroom: 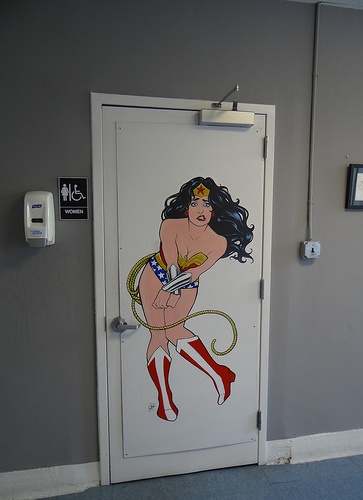 The men’s room isn’t as clever: 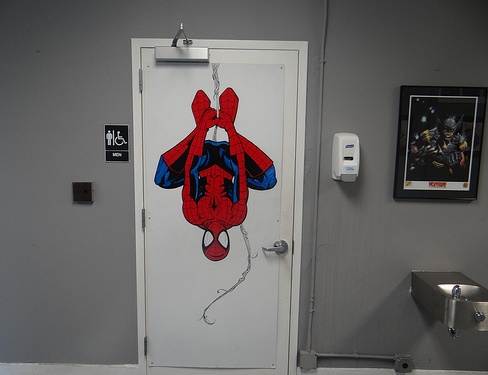 During my visit, there were three classes being held. The first I visited was the pre-teen class. When I was there, they were sharing with the class the original comic they had created the night before. I didn’t want to interrupt or stay too long here, but suffice to say there were more creative ideas spoken about in my 5 minutes here than in the Big Two solicits for November. 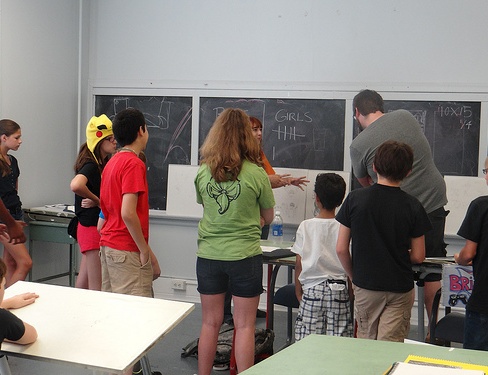 Just down the hall was the teen instruction class, which I sat in for a little bit longer. This classroom drew my attention to just how much incredible art goes unnoticed in the school. Look at the sketches on this desk – these would be the highlight of my skills, but here they simply are what happens when students are bored. 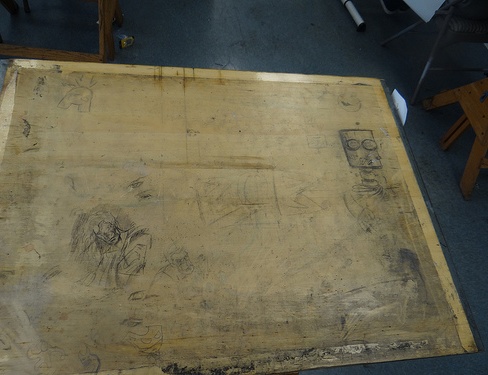 The class was learning about drawing perspective, and the instructor was explaining, in the clearest way I can imagine, the uses of various perspectives. Even sitting in for five minutes, I feel I learned a whole lot. 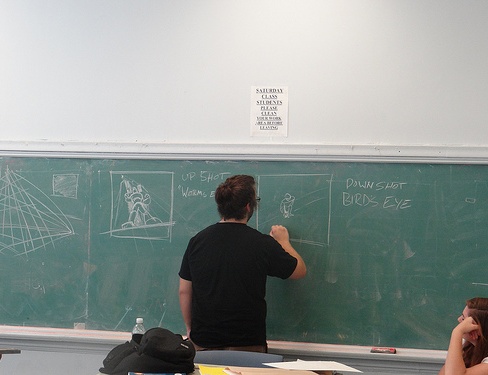 When you go upstairs, you are greeted by the school’s library – a site, sadly, that was locked up during my tour. 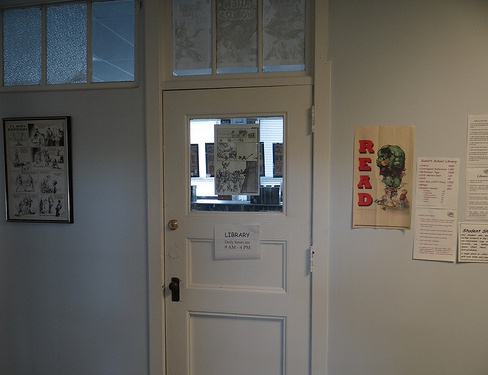 I did, however, get to take a picture of these facts about the library, which are fascinating. 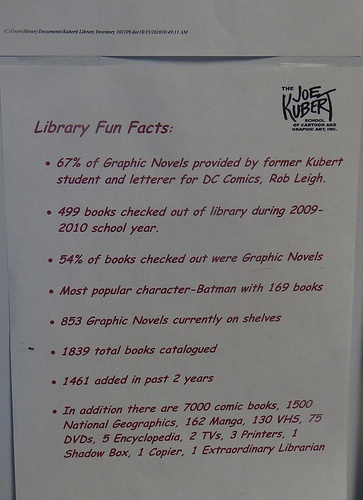 Before getting to the third class of the day, I passed by the copy machine, lovingly named Ultron. 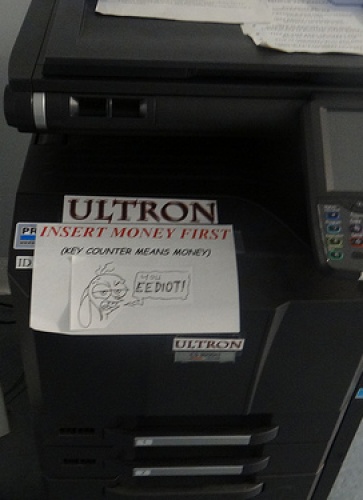 As could be expected, Ultron has demands. 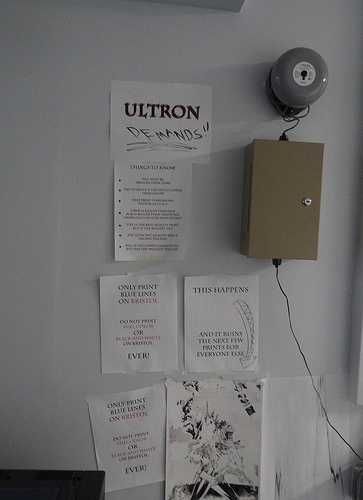 Just after passing Ultron, I got to sit in on the summer class for adults at the Kubert School. This class seemed to be a mix of full-time college students, foreigners here for the summer, and people trying their hand before jumping in, feet first, to the world of cartooning.

During my time in this class, the students were working on creating their own characters, and doing head shots and 360 views of their new creations. It was really interesting to compare and contrast the working styles of the various students – some worked in silence, others had music playing, and a few appeared to be streaming videos while drawing. 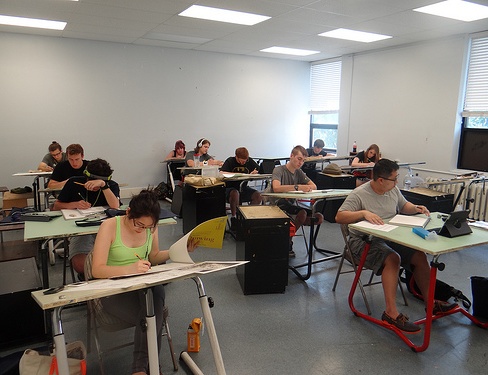 Some of the students were staying in the Carriage House, as it is known, the original location of the school and where dorming students stay during the school year. I wasn’t able to get there, but I did get to spend a little time in the recreation room at the school. 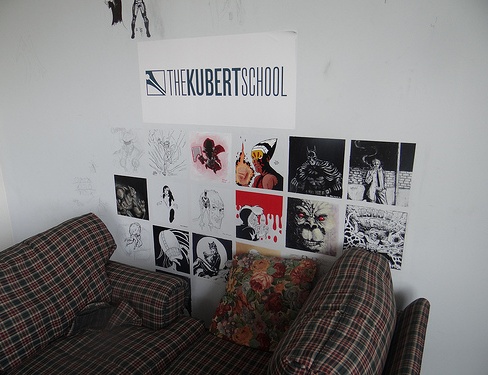 As you can see from the above photo, there is not only hung art on the walls, but sometimes students themselves decorate the walls with their original artwork. Those are not tacked up there, those are painted directly on the wall. 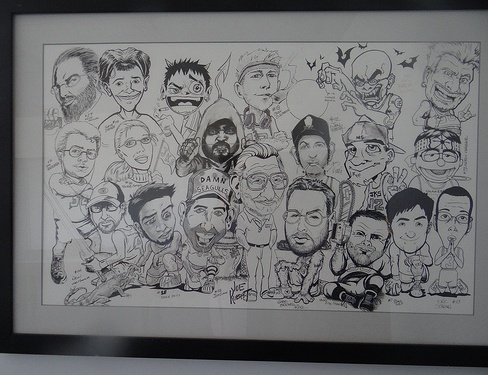 There are a number of these as well – illustrations of various graduating classes, or general alumni, where each person draws themselves into the picture. Spot anyone you recognize? 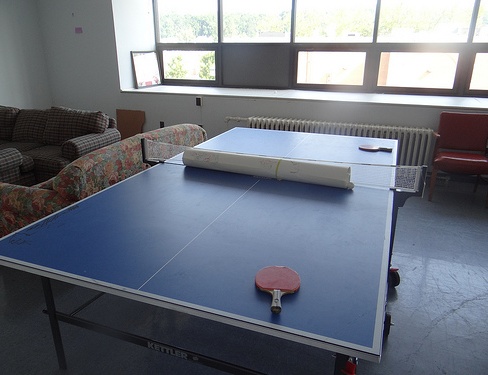 This looks like a regular ping pong table, right? A way for students to let off steam and have some Balls of Fury like shenanigans. However, a close look at the bottom left hand corner of the table tells a bit of a different story. 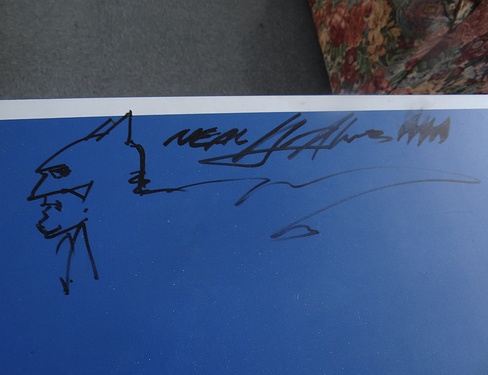 This was personally donated, and signed/sketched on, by Neal Adams. Again, this is something that you may walk right by, but is a fun piece of comics history. 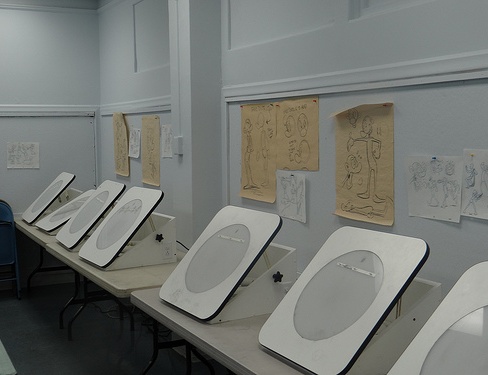 After visiting the Rec Room, I went downstairs and peaked into one of the animation labs. All students here are required to do work in animation, both hand drawn and on computers. Here is an animation model – and while I have no evidence of this, it looks to my eyes like this was drawn by Joe Kubert himself. 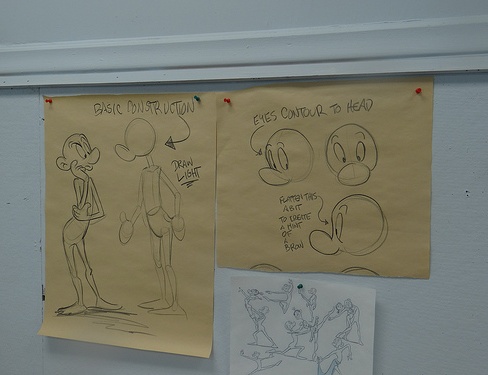 Also on the ground floor, in the main lecture hall, was this old animation camera. 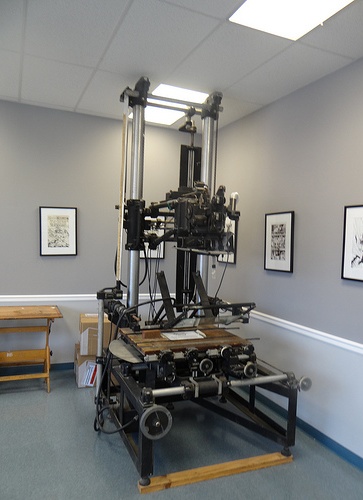 On its own, that is pretty cool. However, check out what it was actually used for: 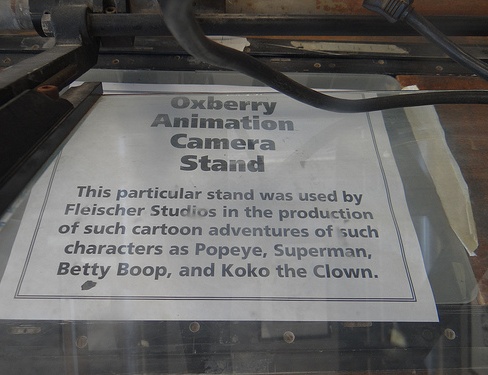 As a kid who loved the Fleischer Superman cartoons growing up, this camera was my favorite thing I saw all day.

My final stop on my tour was the art supplies store that the school runs, in the same building 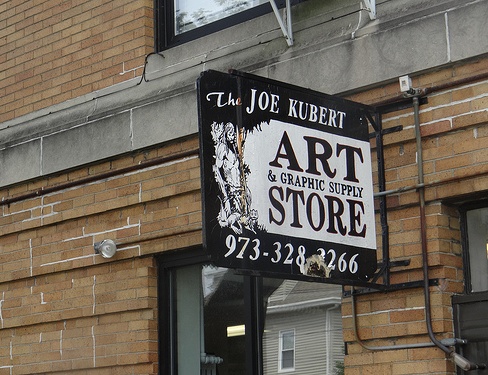 This is one of the best art supply stories in all of New Jersey, and sells everything from drawing desks to pencils to surprisingly cheap comics/graphic novels. 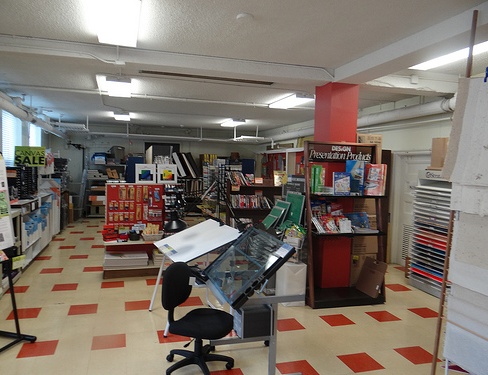 All in all, this trip was incredibly inspiring, educational and, at times, made me feel like a kid in a candy store. If you live in the area and want a Saturday morning activity, have a summer to kill, want to take a correspondence course or are seriously considering a career in comics, you owe it to yourself to inquire about the Kubert School. Lots of info can be found at their website.