Sometimes, a series hits its stride in unusual ways. For “The Power of Shazam,” less reliance on Freddie, arguably the best character in the book, an ‘Elseworlds’-style arc, and guest stars really made the difference. These are the most consistent issues of the series thus far, and are super fun. 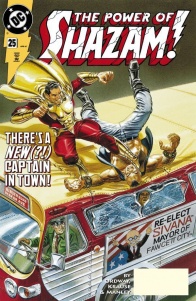 Introducing The Marvel Family ’97! Something’s rotten in Fawcett City. C.C. Batson is the Big Red Cheese? Sivana is the city mayor? The power of Shazam is in jeopardy and what happens next is anyone’s guess!

The first two issue of this batch are guest-star showcases, with Plastic Man and Batman getting the nod. Each issue nicely highlights its guest, but keeps enough of the Shazam-focus to make it not feel out of place or like the guest star is taking over the issue. Neither story is super memorable in the great scheme of great team ups, but both work well, and both involve “Muscles” McGinnis, the undercover cop from the first arc, and both extend his story nicely. I’m still not entire sure why he’s in the book, but it is a nice tether to Fawcett as a locale, something that will come into play a little later.

These two issues, taken especially with #29, show just how versatile Krause, Manley, and Whitmore are as a visual team. The Bat-issue was sufficiently dark and shadowy, the Plas issue silly and, with #29’s introduction to Hoppy, incredibly goofy and childish. There isn’t enough space here to go into just how impressive the crew is, going from tone to tone with ease, and without giving the reader cognitive whiplash. We’ll talk more about #29 towards the end of the review, but the fact that, with only planned/thematic breaks, this team was able to create such a rich world, and one that could feel so different from issue to issue, is really special.

But the real meat of these issues is the #25-27 block where there is some timestream madness going on. Due to Dr. Sivana traveling through time to talk to his younger self, he is able to prevent the Batsons from dying, and get elected as Mayor of Fawcett City. This leads to Billy and Mary’s parents being the Captains Marvel, and we get to experience their exploits through the eyes of their kids.

These types of stories are transparently temporary and usually pretty easy to predict, but that doesn’t make this any less moving. Seeing both Billy and Mary’s love for their parents, as well as the selfless act of C.C. Batson to set all of this right, is really tender. This story doesn’t really do anything for the overarching story except give Mary a new costume, but it does allow the reader to see a little bit of the pre-Shazam life of Billy and Mary, and that has value in this story.

It also sets up the new status quo where Billy is adopted by Mary’s adoptive parents. Billy and his new stepdad clash a bit, but mainly just because Billy is used to coming and going as he pleases, without having to answer to anyone. Plus, he’s not sneaking out to smoke doobies under a bridge, he’s sneaking out to be Captain Marvel, so the stepdad sort of comes off as a dick, but how could he know?

The last three issues of this batch are all interesting for different reasons. First, the string of legendary guest artists continues with Dick Giordano drawing a Mary-focused issue #28. The series keeps showing us that, while she may not be the first, there is little doubt that Mary is the most effective Captain Marvel. Her heroism and bravery have been on display the entire time, and Giordano does a nice job bringing her into the forefront.

Hoppy, the Marvel Bunny, is introduced in a surreal #29. Whether or not most of this issue actually happens is up for debate, but suffice to say Krause and Manley do an incredible job turning the book into an all-ages romp for 15 or so pages. When they mix the animal characters and the humans, they really manage to thread the needle for both styles. It’s something to behold.

Finally, issue #30 is the saddest Uncle Dudley series you’ve ever read. It’s a bold move for Ordway to make him an alcoholic with jealousy and hate in his heart. Dudley is an incredibly complex character here, but also impossibly sad. He’s lonely with Billy now in the ‘burbs and Tawny filming movies, and so he turns to drink to console him. It’s a very human story, and for a character that was historically used for old and fat jokes, it’s quite the turn.

– Billy is a tool of the military industrial complex in #23, essentially siding with the government over scientists trying to rid the world of nuclear waste. Billy, subscribe to Chapo.

– There’s a fun C.C. Batson/Spy Smasher story, but it begs the question, just how old were the Batsons when they had kids? If they’re supposed to be teenagers in the 90s, they couldn’t have been born much before the late 70s, which means that they were at least in the 40s, since C.C. was an adult on expeditions during the Eisenhower presidency.

– There’s almost no Freddie in these issues, and while that’s a bad thing in general, it gives Mary a chance at the spotlight, and no one should be too upset over that.