There are a lot of comics out there, but some just stand out head and shoulders above the pack. With “Don’t Miss This” we want to spotlight those series we think need to be on your pull list. This week, we look at an ice-cold tale of horror and suspense, “Road of Bones.”

“Road of Bones” is written by Rich Douek (“Gutter Magic,” “Wailing Blade”), with art and colors from Alex Cormack (“Sink,” “MI666”) and letters from Justin Birch (“Miraculous,” “The Séance Room”). 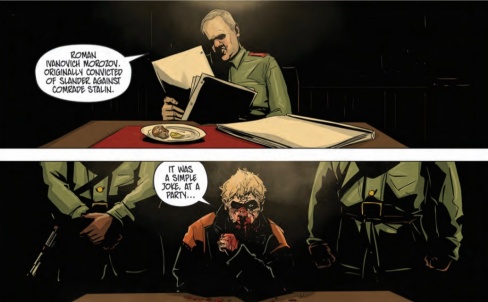 It’s 1950 in the Russian Gulag. For those of you who don’t know what the “Gulag” is, it was a system of labor camps in the Russian archipelago. People were often sent there for anything from being political opponents of Stalin to making a rude joke about him. Prisoners were worked hard, occasionally to death, by the men in charge. Even if they escaped they’d have to cross such an absurd amount of snowy waste to get back to civilization, they’d most likely die before they ever reached it. (Obviously, feel free to “Um, actually” me – I’m just going off of a scanned Wikipedia article, what I’ve gleaned from the comic’s context, and what I remember from my college Russian classes a decade ago.)

Three men make the escape, but one of them is violent and extremely dangerous. It’s not the best survival party, but it beats the hell out of the labor camp. Plus, if they turn back, the camp officers will beat the hell out of them. 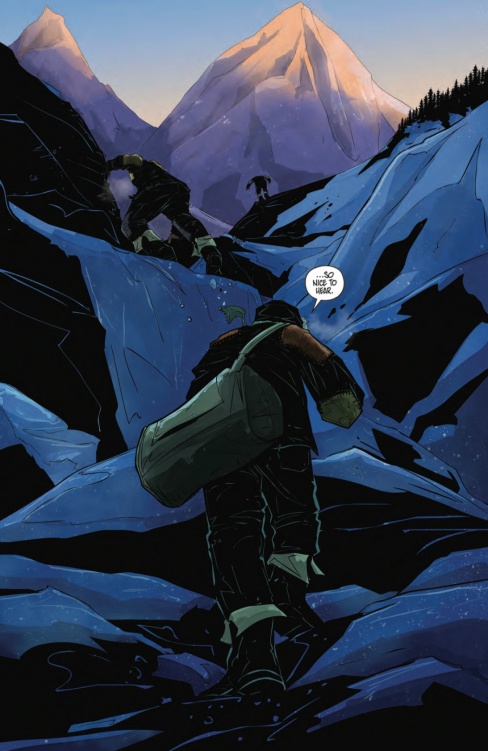 “Road of Bones” takes the arctic survival elements of The Grey and mixes them up with the Russian volatility and violence of Eastern Promises.

Oh, but there’s one more thing: our protagonist believes in a supernatural entity. And, in a way, the…thing…protects him. But it’s no OKguardian angel. Even shrouded in shadow, it looks skinless. Maybe burned. Definitely hungry. And it follows our hero wherever he goes.

Danger is everywhere in “Road of Bones.” It’s a comic that builds a sickening sense of terror and dread while periodically bathing you with scenes of horror, both man-made and supernatural. 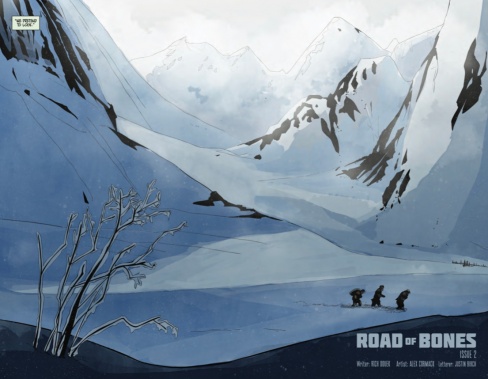 Horror is hard, especially in a medium, like comics. With film or TV, you can lean hard on music or a soundtrack to build tension or amp up a surprise. With comics? You have to use what you’ve got: color, shading, the tone of a scene, the tension of a situation, and the page turn. It’s truly awe-inspiring to see how Rich Douek and Alex Cormack use this simplified toolbox to their advantage.

Alex Cormack’s color palette is bleak. With so much snow all around, everything is white-washed with snow and ice during the daytime. You feel the frozen sterility of the environment radiating cold off the page. The nights are terrifying, filled with long shadows and the orange of fire. Some scenes don’t even have fire, and panels look like black boxes with thin color holds defining our characters in the darkness.

Situationally, you really feel the pressure of danger as if you, yourself, were in the labor camp. That feeling like you’re about to get sucker-punched or stabbed from a camp officer or a fellow prisoner, alike. The tension of hungry, hate-filled people all around. The abyssal snowy tundra ready to swallow you up. The party member you rely on because he’s a survivor and he knows where to go, but who you fear because he could turn on you in an instant. The demonic creature that grins malevolently because it has no lips waiting just out of sight in the shadows. Rich Douek brilliantly sets each up not only to build that sense of dread but also to remove any sense of choice on the part of Roman, the protagonist. All he can do is move forward. There is only survival.

Cormack’s Lovecraftian line art also builds that terror. You don’t need to see every detail of a prison riot to be terrified of the danger it poses. A demonic entity is a hundred times scarier when your imagination fills in the blanks. It’s not the immediate mountain or frost-filled valley that gives the feeling of impending doom – it’s the knowledge that there’re miles and miles more of it in any direction. The sub-zero Siberian temperature isn’t what chills you, but the implication that there is no possible way one could survive. Alex Cormack knows this and uses it to highlight the brutality of nature’s icy cliffs and the horror of humanity in the white of a murderer’s eyes and teeth in the dark.

Often, Justin Birch lets Douek and Cormack have the spotlight, only using sound effects when it truly builds the terror or reveals the horror of a scene. His font choice feels conversational, closer to handwriting. Its informality mirrors the brutishness of Roman’s less-than-savory party members. Balloons are not unreasonably small, but leave a good amount of the panel to the art. It helps build that sense that the environment is trying to envelop the three fugitives, trying to swallow them up.

There isn’t much of an underlying message in “Road of Bones.” Underneath the brutality of man, of nature, and of the supernatural, you find only more and more layers of terror and horror. “Road of Bones” is an anxiety attack in four issues, and one of the best modern horror comics on the shelf.

And it’s only halfway done.

If you can, start it now. Between the impossible journey ahead, the murderous party members, and the horrific creature who hides in the dark, I have a feeling the rest of the series is going to get real crazy, real fast.

How Can I Read It? 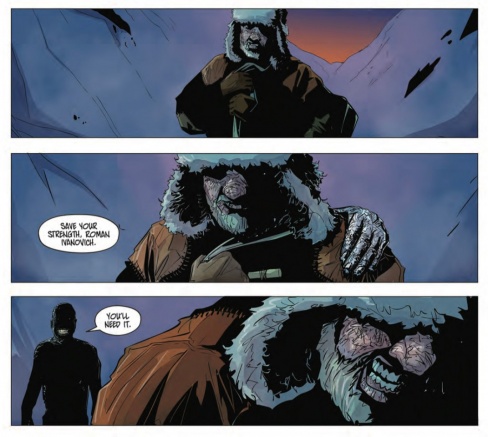 Issue #2 of “Road of Bones” drops today. It’s a 4-issue miniseries, so you’ll want to get on it now. The first issue also went back to print so, with some luck, you may be able to grab both issues at your local comic shop. You can also find it digitally wherever comic books are sold.