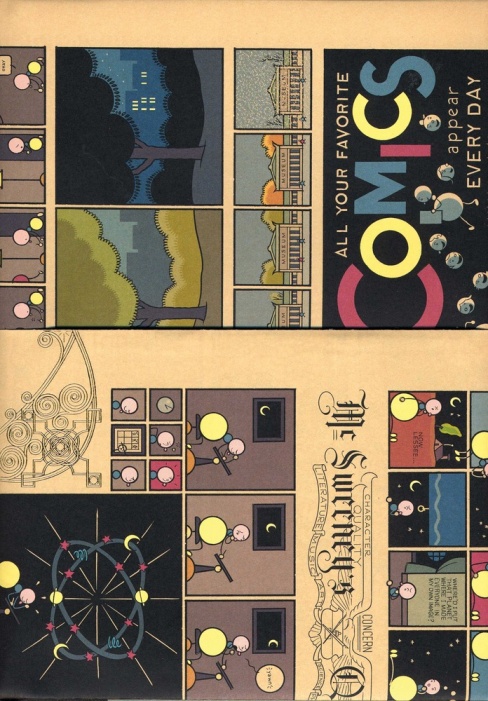 The purpose of any anthology, to my mind, is to introduce the reader to material he or she may not have encountered otherwise, usually by grouping submissions around a theme. Here, in the thirteenth issue of the literary quarterly McSweeney’s, the theme is simply comics, with Chris Ware acting as editor; and as you can imagine, there’s quite a bit of range in terms of topic and style. Packing more than forty pieces into a compact — and very beautiful — hardcover, the whole winds up feeling, in the best possible way, like a Tower-of-Babel-esque hodgepodge of contrasting voices and approaches. The result is a volume that’s constantly challenging and surprising, and liable to keep you browsing for hours, discovering new artists and writers along the way.

There’s so much going on here that it’s difficult to know where to start; from short, stand-alone pieces to excerpts from longer works, the variety in itself is a selling point. Different pieces are bound to stand out for different reasons to different readers, but for this reviewer some of the most interesting discoveries were Gary Panter’s “Nightmare Studio” (a haunting retelling of a dream done in bleary ink and wash) and Richard Sala’s “Strange Question” (a German Expressionist-looking tale about a young lady confronting her demons). Ivan Brunetti’s one-pagers about the lives of famous thinkers and artists (among them Eric Satie, P. Mondrian, and Kierkegaard) are also a delight, drawn and written with a dryness that makes them hilarious as well as depressing.

A more experimental standout is Richard McGuire’s utterly minimalist, wordless, and very nearly abstract “ctrl”, which tells a thought-provoking story using only blocks of colour. The simple but subversive humour of Mark Newgarden’s “The Little Nun” makes those selections great fun as well.

Then, of course, there are some bits and pieces that are pure surprises: next to an excerpt from “Black Hole” by Charles Burns, a map that the artist drew of his neighbourhood at the age of seven; taking up a quarter of the title page, a short, and very moving, wordless comic by David Heatley about the history of a relationship.

Overall, there is something of a bias toward autobiographical artist tales in this anthology (among them Lynda Barry’s “Two Questions”, R. Crumb’s “The Unbearable Tediousness of Being”, and excerpts from “Sulk” by Jeffrey Brown), but the overall range is broad enough that if these aren’t your cup of tea it’s easy to flip on to something else. As it happens, these are quite accomplished examples of stories that work within those conventions, and some readers may find themselves pleasantly surprised.

This book is as much involved in comics history and comics criticism as it is comics themselves, and about 10% of the material is actually printed essays. Many of these are heavy going but ultimately rewarding, with two standouts being 1) an examination of the work of the man who is considered the inventor of the comic strip, Roldophe TÃ¶pffer, and 2) and a fascinating look at Charles Schultz’s rough sketches for “Peanuts”.

Like pretty much all of McSweeney’s catalogue, this book is a beautiful — and creatively put together — object. The dust jacket actually unfolds to become a poster-sized compilation of comic strips by Chris Ware, and tucked into a fold of the jacket are two zine-style supplements. One is a chilling and thought provoking tale from Ronald R. RegÃ© about the motivations behind a would-be suicide bombing; the other, a quiet and peaceful set of short stories from John Porcellino.

As you can see, I could ramble on and on about all the little surprises that are to be found in this book — and for all that, I’d probably still not do justice to all the great stuff here. It really is down to you to give a couple of afternoons to this anthology, and pick your own favourites. But there’s one thing I can guarantee — this book has got something to please, interest, and challenge comic veteran and noob alike.