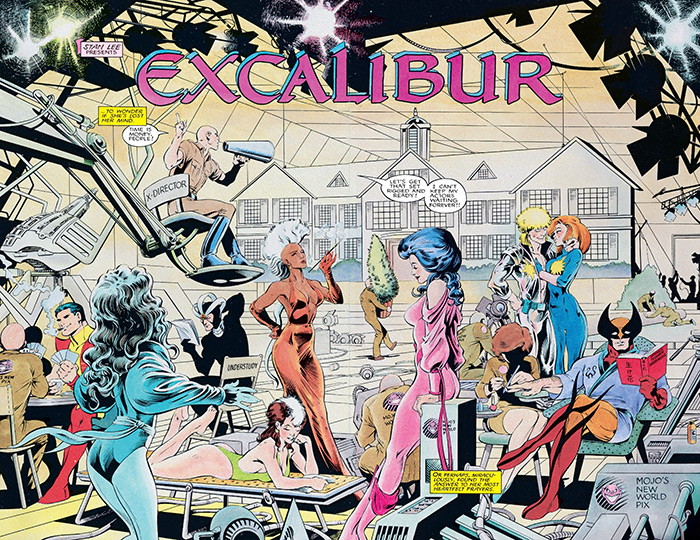 “Batman: Creature of the Night” is sort of Kurt Busiek’s spiritual successor to “Superman: Secret Identity.” Once again, we see a big DC character through the lens of the “real world.” I’m not going to get too into the thematics of the story here (they’re great and well-examined). I want to walk you through how John Paul Leon is crushing it on this comic (along with Todd Klein lettering. Yes, that means Leon is coloring the book too.)

One of the conceits is that every now and then, we see flashbacks bleeding together with a style that hearkens back to the very beginning of Batman comics. In addition to how great Leon is at replicating that style, Klein is just as great at mimicking the lettering style.

The story takes place in Boston, which is a wonderful and unexpected touch. It also gives Leon streets like this to draw:

And when Leon gets to draw a city, he goes all in.

Every car, building, window is thought out and rendered.

He can even nail the perspective of an overhead shot, the kind of thing you can’t really do if you’re just drawing over a background that’s a hi res jpg off Google Images.

Leon doesn’t just stop at the stuff that stands still. His storytelling from panel-to-panel is impeccable:

And who can say no to a classic “Here’s a bunch of people” row of panels.

One of the strongest aspects of “Creature of the Night” is a Batman that is truly terrifying. Of course, Leon nails that too.

Image Comics is certainly taking advantage of a generation of comics creators who likely have the most varied set of influences and access to the most versatile set of creative tools than any other that’s come before them. That’s led to a truly impressive roster of books by new creators doing really unique stuff that’s pretty unconcerned with what genre or style it might fit into. They’re just telling the stories that excite them.

“Paradiso” is…well…I’m not 100% sure what it’s about. There’s weird technology and a sort of post-apocalyptic vibe to everyone’s attitude. Definitely a world that seems to have “moved on.”

Writer Ram V has given artist Devmalya Pramanik and colorists Dearbhala Kelly and Alex Sollazzo the kind of world and concept that they can really run with.

There’s also plenty of phenomenal looking character and creature designs that I couldn’t begin to describe in tired blank-meets-blank platitudes:

In addition, artist and colorists are doing some exceptional work adding texture to the linework.

In addition, letterer Aditya Bidikar is once again proving himself one of the most exciting letterers working today. Like most (all?) practicers of the artform, he works digitally, but he clearly takes care to make typefaces and balloons that reflect the idiosyncrasies and imperfections of handcrafted work.

“Excalibur” is by far my favorite X-related property. It came around when when I was fairly new to the X-Men and was lighter than “Uncanny X-Men,” featured some of my favorite characters, and was flat-out gorgeous. All of its strengths are present in its opening sequences, which basically make up an introduction as perfect as the cold open from the pilot “Eastbound & Down”.

And all behind this incredible cover by Alan Davis and Paul Neary, colored by Glynis Oliver:

Kitty Pryde finds herself in a crazy movie version of the X-Men, featuring versions of all her friends. Look at all the cool little details, like Havok as “Understudy” and the logo for “Mojo’s New World Pix,” based on the New World Pictures logo we of course all remember.

There’s also the brilliant detail that all of the “actors'” powers don’t activate until the director yells “Action!” (And, man, look at letterer Tom Orzechowski’s “Action!”)

Next we meet Brian Braddock (Captain Britain) and his girlfriend Meggan. Braddock’s sister is (was?) Psylocke, but he just found out she died. And he’s being quite a dick about it.

In fact, his whole relationship with Meggan is pretty troubling. She’s got the mental capacity of a child and check out that sequence where she literally changes her appearance because it might make him feel better. Yikes.

And the heralds of Technet, Gatecrasher and Yap. Too many awesome moves by Orzechowski here to point out.

I will point out Orz’s “UnGLAUblich!” here though, because it’s beyond iconic.

But really, how could you not fall in love with them.

Mark Waid and Chris Samnee are currently walking Steve Rogers through a bit of a rehabilitation tour across America for their Legacy storyline, after the events of “Secret Empire”. One of the things working best about it is artist Chris Samnee’s vision of America and the Americans who live there. Samnee is joined here by colorist Matthew Wilson and letterer Joe Caramagna.

The opening issue of their run features a “Captain America Celebration,” perfectly suited for the occasion.

Samnee is brilliant at character design. Just look at what he does with just a few lines in the second panel below, perfectly capturing this lanky goof.

His ability to create unique looking characters is also great in this sequence:

He also knows how to fill a restaurant:

Waid and Samnee are recentering Steve as a defender of the America we all walk through every day. The people around us a big part of that, and Samnee is doing an incredible job of recreating them.

In the first installment what will inevitably be a long running periodic feature of the column, here is an absolutely perfect panel from Garth Ennis and Steve Dillon’s “Preacher” (colored by Matt Hollingsworth and wow look at that Clem Robins lettering). Evil racists on fire, Jesse grimly looking on, and Jody getting one of the best lines of the series. 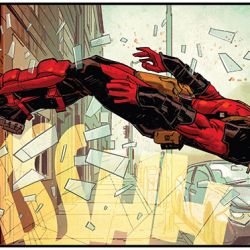 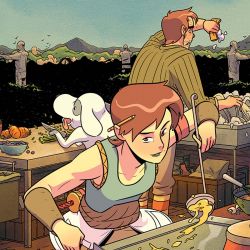 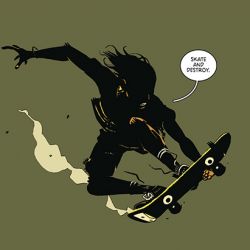