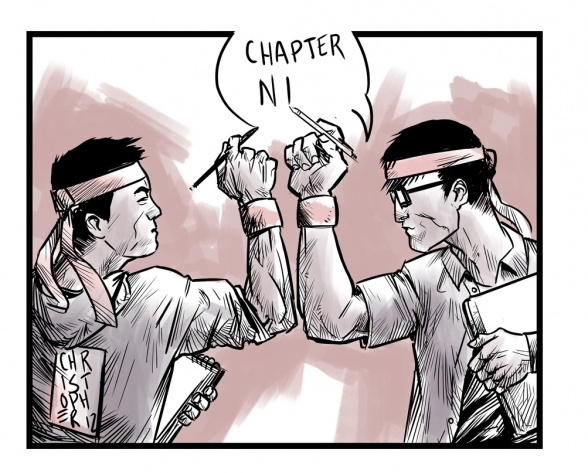 What makes a comic “good”? This seems like a stupid question but it’s an ongoing education that I continue to take notes on. What makes the answer so elusive is that when attempting to produce top-notch creator-owned work, your opinion (as a writer) only half matters. It’s certainly important to have confidence in your scripts, but it’s the opinion of an artist who will hopefully bring your words to life. So how do you make your half count?

It begins with trust. Trust in creator-owned comics comes in a variety of different forms. The opinion of which method is more appropriate varies to a large degree, but I’m getting ahead of myself here…

Starting out, I knew nothing about how to earn the trust of an artist. Approaching one for the first time was more daunting than the actual writing. It wasn’t that I feared rejection, I was more concerned with the proper etiquette between a potential collaborator. Do I try to become friends with him/her first? Do we keep it strictly professional? I had no clue. All I knew was that I wanted to establish a genuine rapport that would in turn provide them a sense of creative freedom, and allow us to produce quality comics. All of my favorite creative teams exuded this quality within their books, I just wasn’t sure on how to proceed.

I ended up giving my very first script to the only comic book artist I knew at the time. He happened to be friend from high school/college and was very enthusiastic about the project. We had agreed that instead of a page rate, we would split the intellectual property, and I encouraged him to provide input with the story.

After reading the script, the first thing he mentioned was that he was going to draw himself and all of his friends into the comic. This should have been a red flag, but because I hadn’t drafted a character sheet detailing the look of my cast, I didn’t see this as a conflict. Plus, I thought I was providing our collaboration the creative freedom that would result in a high-quality comic.

What he eventually presented were pages of panels that were haphazardly stitched together and lacked a coherent narrative. What I could see almost immediately was that the scenes did not capture the tone and pacing of my script. Without the lettering, I couldn’t follow along, and this was something I wrote!

It became distracting to see the cast of characters being modeled after the artist and his friends, not because I disagreed with his idea to do so, but that he was clearly more interested in showing it off to them later. His constructive contribution to the overall plot was all high concept, which against my better judgement, I incorporated into the story anyway. With that being said, I never blamed him for this. I blamed myself because it was my inexperience that failed to provide a fully conceptualized foundation from which to build our collaboration upon.

I also came to realize that I lacked confidence in what I had originally written. Because of this, I refused to admit that even though my friend was great at drawing, he lacked an understanding of how to tell a story sequentially. Was this his fault or mine? I couldn’t be sure, but the fact that he was willing to work for free made me feel like an asshole to disagree with his creative decisions. This wasn’t the relationship that I had envisioned.

Unclear of how to free myself from this entangled situation, I decided to be honest and informed him that I wanted to take the project in a completely different direction. Fortunately, the timing worked out as he was looking into other projects at the time, so we managed to leave on amiable terms.

My first collaboration was a total bust because I was not fully prepared. Writing a script is an accomplishment in itself, but it doesn’t ensure sufficient articulation of your central themes and overall plot that an artist will rely on in order to bring your story to life. Just as I had trusted him to handle the art duties, he trusted that I knew what I was doing with the story. To be honest, all I had were sixty pages, and even though the plot was solid it lacked proper structure. I had taken a cliff dive without first learning how to swim. The mechanics required to keep yourself afloat start with completing all preliminary work for a project. Other than a script, it was vital that I went the extra mile by completing a very brief synopsis, character bios, and issue breakdowns. This benefits all involved and here’s why:

Brief Synopsis – Perhaps one of the most challenging things to write, this should be the first thing you send a prospective artist. If you can’t hook them in a paragraph, you certainly won’t be able to hook an editor either. Honing this skill will directly improve your elevator pitching.

Character Bios – Who are these people that you’ve decided to spend time with? If you can’t find them interesting enough to fill a paragraph or two for each one, you’ve just made way more work for yourself later. Figuring out the minute details of your characters is half the fun of crafting stories, and knowing who they are will ultimately help you to “speak” for them when the time comes.

Issue Breakdowns – Completing these will save you a headache later as you’ll have a clear idea (albeit a rough one), of where your story is going and ultimately how it ends. This will demonstrates to an artist that you have fleshed out a concept into a full fledged story.

I eventually sat down and completed this necessary prep work, and in the process was able to flesh out a much more coherent and better structured story for a prospective artist to review. In addition it’s provided me both the confidence and proof that I know how to construct a complete comic book. I believe that if I had provided these elements to the original artist, our collaboration may have gone very differently. Unfortunately that’s the tough lesson from trial and error.

Finding myself back at square one, it was important for me to contemplate the tonal qualities of my stories. In doing so, this helped guide me towards a more appropriate art style.

I decided to take a different approach to the artist search. I set out by simply looking for art that I liked. Like any skill, recognizing quality took time. I exposed myself to a wide variety of styles in order to cultivate my own value of what I believed to be “good”. My critical eye began to take focus, and it became clear to me on how to gain that trust between an artist that I was looking for.

Having all necessary story elements ready for review, and my sights set on an artist, I opened the conversation with an introductory email ending with, “What kind of stories do you like to draw?”

At this point, I had written enough scripts that gave me confidence in my storytelling ability. As much as I loved my ideas, I was more interested in tapping into the harmonious balance between a solid story and the pitch perfect art execution that I’d read within the pages of my favorite comics each week. This approach also provided an excellent writing exercise by forcing me to write outside my comfort zone.

Everything that I had learned from that first failed collaboration paid off as I was finally working with top-notch artists, who whole-heartedly believed in the 100% collaborative efforts that yield great creator-owned comics. As a result, I’ve since established genuine friendships with many of them, which has made the work that much more fun to create.

Whether you provide a page rate, or prefer to split the intellectual property, it’s imperative that you view your artist as an equal collaborator. Their input is the other half of the equation to telling memorable stories. Providing an equal stake in the creative process is what keeps creators creating when there is no upfront money for anyone involved. To think of it any other way would being doing a great disservice to the spirit of creator-owned comics.

I had the great fortune of meeting Brian K. Vaughan on a couple of occasions, and the best tip he gave was to write for no one else but you and your artist. Doing otherwise has you focusing on trying to appease too many people, which inevitably causes you to pander to them.

He went on to say that comic books are one of those rare creative mediums that don’t require external approval in order to be considered “good”, and as long as the creative team believes in the project, it can absolutely find an audience.

There’s certainly something to be said about that. In case you haven’t noticed, everything I’ve touched upon in this installment has not focused on how to get published. As difficult as this may be to consider–and believe me when I say it certainly is for me–getting published needs to be an after thought. Thinking of it in any other way only serves as an addicting distraction. The irony is that publishers take notice of creative teams that produce work that exemplifies an almost symbiotic relationship. Some of my favorite comics are so cohesive that I feel as if the writer and artist are speaking to me with one voice. It doesn’t surprise me when after thoroughly enjoying reading a comic, I later discover that the creative team behind it are really great friends outside of the work. This all goes back to establishing a foundation of trust, which promotes a fun and healthy working relationship within a creative team. This innate shared love is truly palpable and more often than not, translates right off the page.

So what makes a comic “good”? There may be no definitive answer, but I can assure you that successful creative teams possess the qualities, and have implemented the skills that I eventually came to learn. In doing so, they manage to maintain that rare balance in their working relationship that produces work of legend, and make it look effortless in the process. 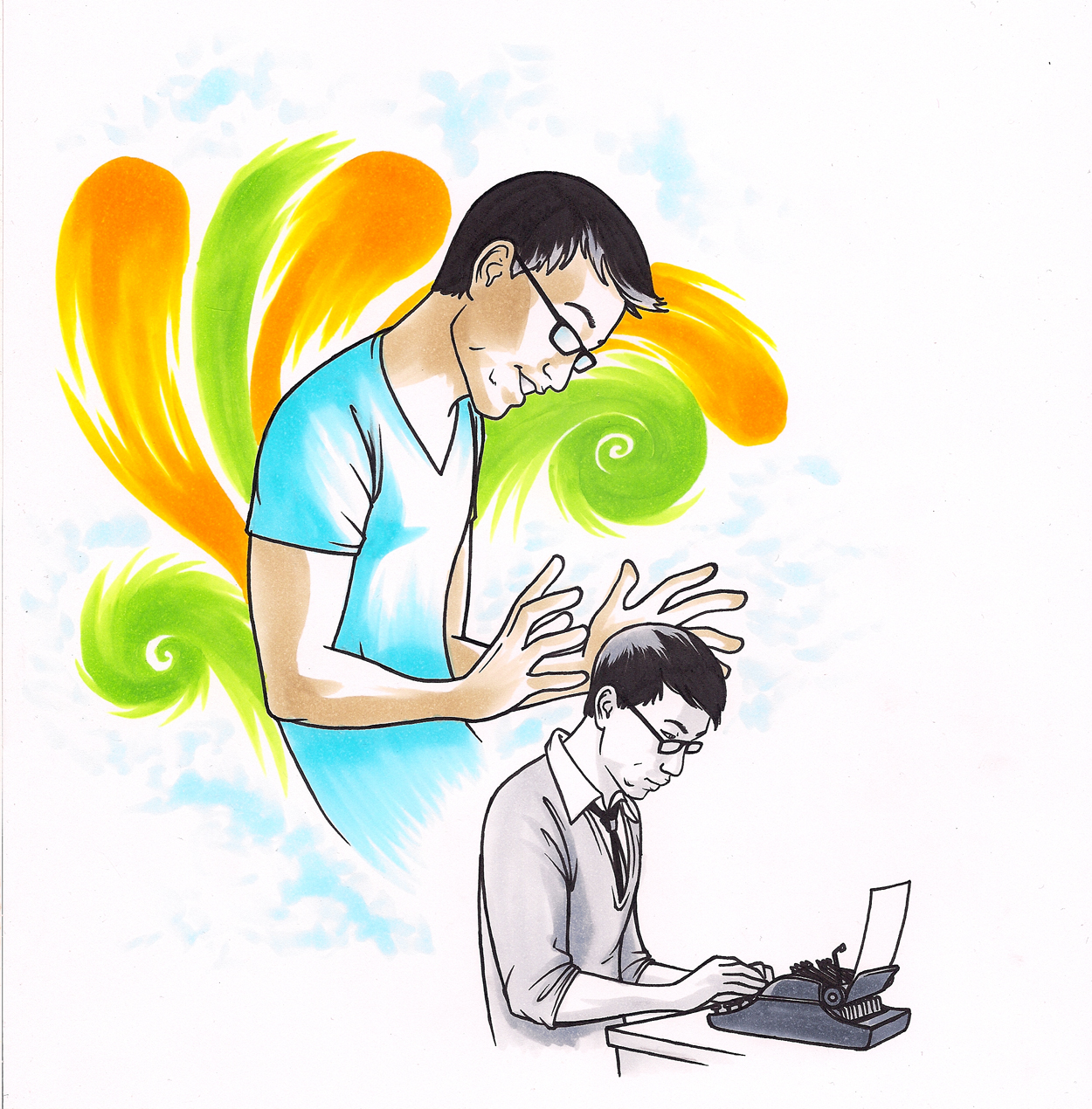 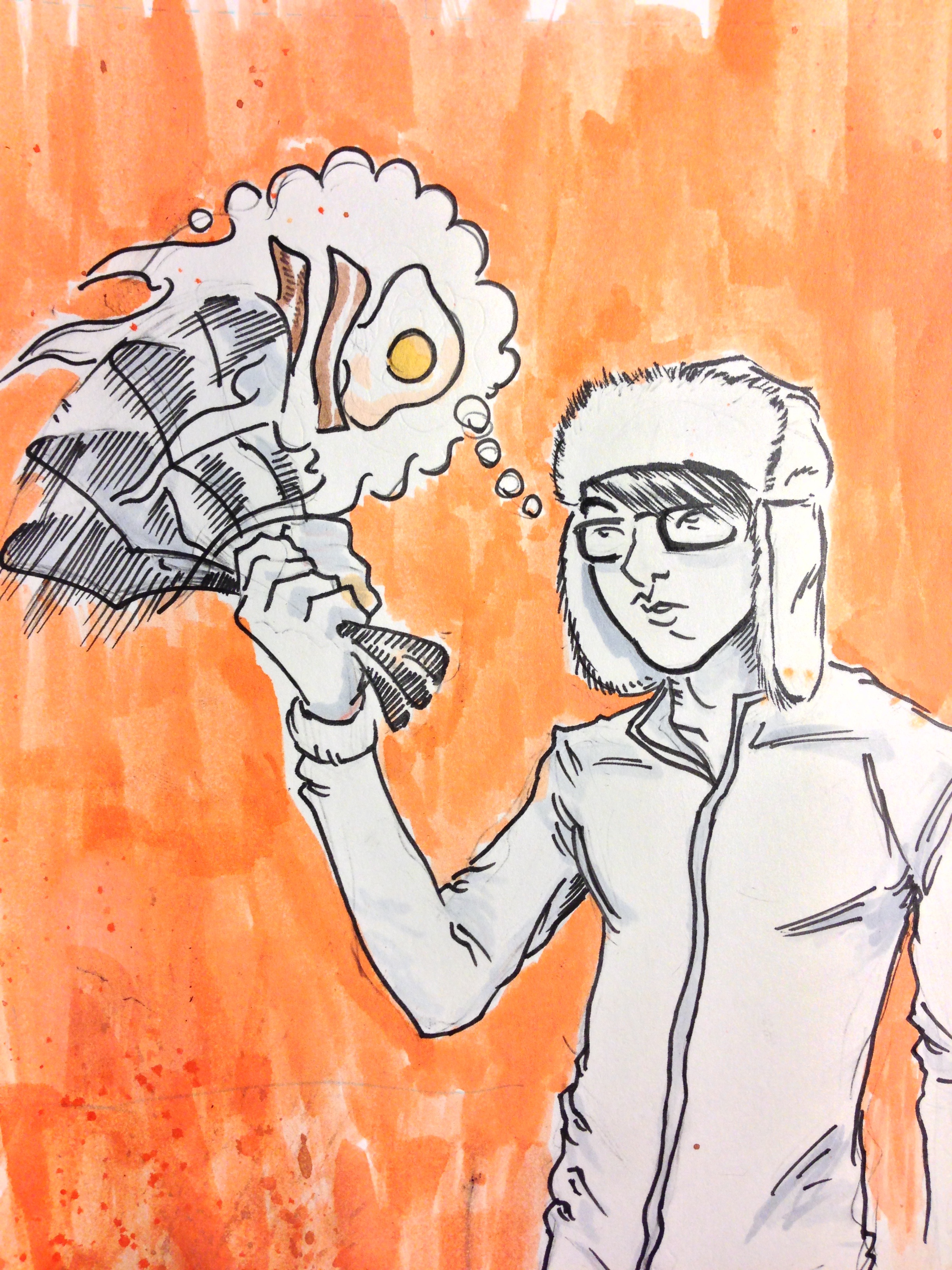