There was once a prevailing thought, once upon a time, that the Comic Con was a wholly American phenomenon. All over the continental United States, there a celebrations of the comic medium and those that work within it and if you lived outside of the U.S., you either had to cough up the money for a plane ticket or watch as everyone had the fun without you. Slowly, but surely that has changed over time as the Comic Con has infected global consciousness. Especially in Scotland. Just two years ago saw the return of the Glasgow Comic which entered it’s third consecutive year this year and continues to grow so much that it had to change venues for more space. And this August, as part of the Edinburgh International Book Festival, we saw the launch of Stripped, a celebration of comic books and graphic novels. 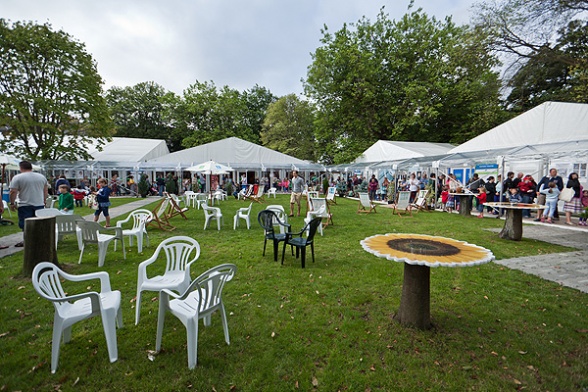 I attended events put on by Stripped throughout the month of August and I want to tell you about it because this really is how we do Comic Cons. As customary of Scotland, we did away with the lavishness of exhibition halls and booths and displays and all that nonsense and we brought it back down to what matters: the comics, the people who make them and the people who love them. In fact, you could easily say that the title Stripped is in regards to the stripped down nature of our celebration of comics. Or you could say it’s a pun on the nature of comic strips. It’s up to you, really.

While Edinburgh filled up to brimming at the beginning of August with tourists around the world to come sight-see and celebrate the Fringe Festival (that’s the comedy one), Charlotte Square Gardens filled with people ready to celebrate books. I was there to celebrate comics and what better what to kick off a celebration of comics than to have a talk from Chris Ware. I’m sure if you’re on this site regularly enough then you should already know the man who brought us “Building Stories” and “Jimmy Corrigan”. In a word, the choice of kicking off Stripped with an event celebrating the work of Ware was inspired. He is one of the greatest story-tellers comics has ever had and if you actually told him that I’m pretty sure he would revert into himself as he showed himself to be one of the most humble men I’ve ever met.

Unfortunately, while it seems that Ware’s talk has not been uploaded, the Festival has uploaded another talk he was involved in with Joe Sacco. It’s a wonderful watch that should all check it out because they are both wonderful story tellers and it, funnily enough, is right here.

It was a wonderful thing to see the Stripped festival kick off with a focus on comics and graphic novels outside of the pop sphere of superhero comics and the Big Two. Having figures like Chris Ware and Joe Sacco, with the risk of sounding pretentious, perhaps gave the event a feeling of legitimacy to stand alongside the celebration of novels and poetry.

From there we saw figures who, while they celebrated comics, weren’t exactly well known for their own comic writing. Paul Gravett, whose talk is sadly not available online at time of writing, took the audience through a history of comic books in a way unlike any other. Instead of starting with “Action Comics” #1 and exploring how superhero comics evolved, he took us further back to the Sunday newspaper comic strips and the cartoonists who brought them to life. He even went so far back as to give examples of comics created in 18th century Germany. It was a history of comics that was more extensive than any other I’ve seen and he could have, and likely would have, talked for hours more on the subject and I would have kept asking for more. If there is any talk from this event that needs to be shown to the world at large, it was this one.

Then I saw James Kakalios give the single best physics lecture I’ve ever experienced. Using examples taken only from comic books, Kakalios took an enraptured audience through a hysterical journey into the world of quantum physics. It is a must watch talk.
Continued below

And that brought us to the trifecta of closing talks from Grant Morrison, Kieron Gillen & Jamie McKelvie, and Neil Gaiman. This was the festivals dip into the pop comics of superheroes and it was wonderful. Grant Morrison, as ever, was able to work a crowd by keeping the stories of his experiences with American comics over the last few years light and humorous, even when talking about the end of his “Batman” saga. He even delved into his upcoming work with his Wonder Woman comic and teased even more about “Multiversity”. The comic, not us. There should be little need to tell you to watch this one.

Saturday brought us Kieron Gillen and Jamie McKelvie to talk about the single most indie superhero comic there is, “Young Avengers”. More of a walkthrough of their processes in creating the book, it’s a great service to the world that you are all able to see McKelvie walk through that splash page from #4. You also get to see Kieron Gillen suffer the funniest slip of the tongue in a long time. For anyone who is curious as to how two creators as closely linked as this create comics, this is for you.

And then, bringing the event to a close, was Neil Gaiman. I’m not ashamed to say that this was the event that made me want to cover the festival. The chance to see Neil Gaiman, the man whose comics made me want to write, talking about the comic that changed my life was too good to pass up. And I was right. His conversation with Hannah Berry took us through how he discovered comics, how he discovered that someone from England could even right an American comic and how Alan Moore taught him to write comics. Oh, how I wish that talk was available if only to hear Gaiman’s pitch perfect impression of Alan Moore. It was a truly magical closing to the festival, celebrating the history of “Sandman” which, in many ways, changed the face of comic books as knew it.

While I was not able to attend each and every event Stripped held, the ones I was able to see really were something. They included great guests from a wide and varied area of comic books talking about their work and life in general and it was exactly the kind of Comic Con I expected from Scotland. This is the kind of festival that other Comic Cons should be shaking in their boots about. This is something I would love to see held every year as it truly was a celebration of the best of contemporary comic books and graphics novels and the talks were but a fraction of it. There was a fair showcasing local small print comics, a vast and varied selection of graphic novels and trades available for purchase and signings after every talk.