We are at the tail end of “The Power of Shazam,” and this batch of issues sees the departure of a key creative team member, a great crossover, and some bonkers shit. Strap in. 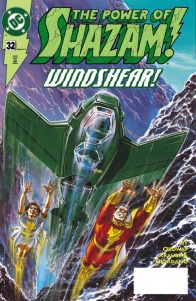 With the Wizard on New Genesis, the Captains Marvel are on their own! And the timing couldn’t be worse, as the kids could use some help in solving the mystery of the woman called Windshear. It’s a dog-fight over Fawcett City as Mary and Captain Marvel battle to keep their airspace free and clear!

One thing that I forgot to note in the last write up of “The Power of Shazam,” before we were so rudely interrupted by “Genesis,” was that after his stint illustrating the Mary-focused issue, Dick Giordano stuck around on inks, replacing Mike Manley. While I missed Manley’s slightly heavier line, Girodano does a nice job here. This creative team had been so consistent for the first 20+ issues, it is odd to be replacing someone, but we’ll get to more of that at the end of this review.

Speaking of “Genesis,” a huge chunk of #32 is focused on trying to catch the readers who (wisely) didn’t read “Genesis” as to exactly what happened. It somehow reads both better and worse in one giant block of text and static images; it shows just how absurd the event was. All the reader really needed to know was that the Wizard Shazam is on New Genesis for the time being, and that Billy and Mary now have Motherboxes to help them both transform to/from Captain Marvel, and also to generally be a bit of a deus ex machina at times.

The first few issues post-“Genesis” don’t really have too many bits of connective tissue, but the two that pop up will play into the two arcs afterwards. One of those is the return of the super gross, covered in worm-sacks Sinclair Batson, and the other is Jim Barr, aka Bulletman and his daughter Deanna.

This – and I’m not joking – leads Barr to hire thugs to kidnap Billy, so that Barr can have a heart to heart with him on a mysterious island (?). In the process, two goons get killed, all so Barr can say “don’t bork my little girl, Billy.”

Oh, and Gangbuster shows up both as a hero and a substitute teacher. It’s weird, but I really like when random Superman support characters show up in other books, because there’s never enough room in Metropolis for them. When are we getting a Gangbuster reboot, DC?

The only “real” crossover with another title occurs in “The Power of Shazam” #35 and 36, which are parts 2 and 4 of ‘Lightning and Stars,’ alongside “Starman” #39 and 40. “Starman” is my favorite comic of all time, so I had read this crossover years ago. At the time, the crossover seemed totally natural in the pages of “Starman,” as it was dealing with Golden Age characters, which was obviously a big part of the title. And that is one of the similarities between these two titles, as folks like Bulletman and Spy Smasher are major players in “The Power of Shazam,” too.

This crossover deals with a mission that Ted Knight, aka the Golden Age Starman, and Jim Barr went on together, and how that top secret mission is the only alibi Barr has against claims of his being a German traitor. The crossover is fun and tonally a great fit, but I must say, it also is a reminder that Tony Harris is one of a kind. Yes, it turns out he may be a jerk, but his artwork on “Starman” is so singular and wonderful. This is no knock on Peter Krause, who does great work here, too, but Harris and inker Wade Van Grawbadger really steal the show in these pages. Specifically, the sequence set in World War II in #39 was absolutely stunning.

I also love how Krause adopts some of the iconography that Harris would drop in his books, with logos popping up here and there in dramatic places. As much as I love “The Power of Shazam,” and I really do, re-reading a few issues of “Starman” for this has reminded me just how fantastic it is as well. But one of the unsung parts of this crossover is how both books don’t feel like they are being ‘invaded’ by the other. Each issue of the respective series feels like their ‘home’ series, and yet, the additions feel right at home. I wish more books crossover over this way, though the first two parts could’ve been somewhat combined into one, sparing some of the repetitive nature, though I understand why the structure was set up this way.

After ‘Lightning and Stars,’ we get another Freddie Freeman-centric issue, with former inker Mike Manley coming in to illustrate. Manley, who illustrated a couple of prior issues, does a fantastic job here, following Freddie – now known as CM3, so he can say who he is without turning back into a mortal (about the smartest reason for a name change I’ve ever heard) – through a Morpheus-induced nightmare state. Manley tackles scenes of great pathos, humor, and horror in one issue, and handles each with aplomb. I’ve come back to this idea a few times in this read, but there are so few comics today that vacillate tones as frequently as they did in the 90s, I feel that a lot of artists today would have a hard time pulling off titles like this.

After that palette cleanser, we get another arc, and this is one that has a lot of history. ‘The Monster Society of Evil’ was a classic, character-defining story from the 1940s. It was re-adapted by Jeff Smith in his magnificent “Shazam! The Monster Society of Evil,” which we will get to next summer. But here, we get a simplified version of the story, focusing more on Mr. Mind and his fellow worms than we do on the other villains from the rogues gallery.

This is a very effective arc, though it does a bold move that doesn’t really do anything for the series. The town of Fairfield, where the Bromfields, Mary and Billy’s adoptive parents, live is quite literally blown up by a nuclear bomb. Fallout is contained by Ibis, but it appears that the Bromfields, as well as all of Billy and Mary’s schoolmates, are dead.

Well, syke, the Bromfields are ok, but the rest of the town? Not so much. Now, obviously there may be some more fallout (pardon the pun) in future issues, but once the Bromfields are okay, the Batsons seem to care very little that their home was destroyed forever. Aside from that, this is another fine Mr. Mind story. “The Power of Shazam” has done its best work with Mr. Mind, of the ‘big’ villains, and that continues here.

– Did Muscles McGinnis always talk like Bibbo? I don’t seem to recall that, but in #33, he certainly sounds like Bibbo. (Oh, and Bibbo’s brother, Professor Bibbowski returns, briefly, too, in #39)

– Spreaking of #33, it is a heartwarming, small story about a boy named Victor who is a burn victim, and who Billy and Mary try to help out by getting him some of the magical cream that made Madame Minerva look young for so long. He eventually just gets a one day supply, but Victor uses it on a Saturday to hang out with the Batsons and go to all his old haunts, including the comic shop, natch. It’s a lovely, heartwarming issue, that is rendered horrifying when you find out that Victor was likely nuked along with all of Fairfield. Yarp.

– We meet a former Nazi named ‘the Poser,’ a metahuman who can shape shift, and who is pretended to be Bulletman. He was put up to it by Captain Nazi’s brother, of course, but eventually absconds to the good guys.

– That continues the trend, though, of this book really building a world and returning to various parts frequently. So few books have this many support characters that actually mean something and keep popping up. It’s fun, and very rewarding.

– My one frustration with this era of “Starman” was that the cosmic rod became a little too powerful, which we see here.

– Between ‘Lightning and Stars’ and ‘The Monster Society of Evil,’ we encounter three Green Lanterns of Sector 2814: Abin Sur (in the 40s), Kyle Rayner in the present, and a time-traveling, not evil Hal Jordan, which apparently was a thing? I have no recollection of this.

– Mary is kind of a brat to Bill Clinton in this issue, which she chalks up to being ‘raised in a Republican household.’ Gosh, kids these days don’t respect anything!

– Finally, #41 sees the farewell of Peter Krause, and he even gets a shout out in an editor’s box for his contributions. We are hitting the final stretch of this ongoing, and I can’t help but fear it won’t quite be the same without Krause.

Next week: “DC One Million” and the finale of this series (until “Blackest Night”).

The Chronicles of Shazam: “The Trials of Shazam” Part 1

***Record scratch***So, today was supposed to be the final ‘preamble’ to “52” installment of this column. But a number of my Multiversity responsibilities have crashed into each other. Two of the events I was to cover, “Day of Judgment” and “Infinite Crisis,” will be covered in great detail in a few weeks on the DC3cast. […]

The Chronicles of Shazam: Minor Appearances and Super Battles (2003-2005)

Welcome back to the Chronicles of Shazam! We are in a very fallow period for Captain Marvel and the Marvel Family, but this week we did get a few choice things to discuss. Let’s dig in!1. Category One: Minor appearancesIf you’ve been reading this column with any regularity, you’ll know that I’ve been harping on […]

Welcome back, one and all, to the Chronicles of Shazam! This week, we are looking back on 2002-2003 for the Marvel family, which was really just a bunch of Freddie and Mary stories. Let’s dig in!Category 1: The TitansFreddie Freemam joined the Titans L.A. in last installment, and here he gets a taste of being […]