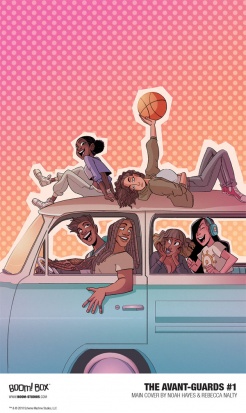 A 12-issue series set to begin in January 2019, the series revolves around Liv, a student at the Georgia O’Keeffe College of Arts and Subtle Dramatics, a girls’ school better known for the arts than its sports programs. Liv, who loves acting and playing basketball, doesn’t want to choose between either, and neither does new student Charlie. As she was a star player at her previous school, it soon becomes Liv’s goal to recruit Charlie to the college’s “ragtag” basketball team.

Carly Usdin told Paste, ““I started playing basketball in middle school, and I still play now as an adult. It’s a lovely constant in my life that I wanted to honor with ‘The Avant-Guards.’ The idea of a funny, pure series about friendship, teamwork and perseverance really appeals to me right now, and I’m so excited to share this with the world in 2019.”

Noah Hayes said, “Gearing up for ‘The Avant-Guards’ has been such a blast. Carly’s created such a wonderful cast of characters that were a ton of fun to design. I hope readers will enjoy the journey we’re taking them on and find them as charming and memorable as I do.”

For more on the series from BOOM!’s Senior Editor Shannon Watters, as well as exclusive artwork – including a variant cover by Veronica Fish (“SLAM!”) – head on over to Paste.