Ahead of New York Comic Con, Humanoids Inc. has announced the hiring of John Cassaday as Chief Creative Officer. The publisher, best known for publishing European comics, including the work of Moebius, has been working towards establishing a greater foothold in the American market, and this move seems to play directly into that thinking.

Humanoids CEO and Publisher Fabrice Gige said this to the Hollywood Reporter:

John Cassaday is one of the seminal artists of the comic book industry. John created “I Am Legion” for Humanoids in 2004 and became part of the Humanoids family. From now on, he will play a major role in Humanoids’ original content development that will have the industry talking. 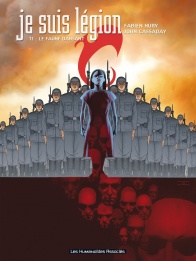 Humanoids, a France-based publisher since the mid-70s, moved their headquarters to the United States in 2013.

Giger references “I am Legion,” aka “Je suis Légion,” a French-language comic written by Fabien Nury and illustrated by Cassaday, had three Humanoids-published volumes in the mid-aughts, and was published in the US by Devil’s Due. A film adaptation by Richard Stanley and Nacho Cerdà has been announced, but has not yet appeared.

Cassaday is best known for his work on books like “Planetary,” “Star Wars,” “Captain America,” and “Astonishing X-Men.” Here is what Cassaday said about the news to the Hollywood Reporter:

This is the first time I’ve taken on an executive role at a company. And that speaks to just how excited I am to be a part of a bold new chapter in their history. Fans who attend the New York Comic Con panel will be a part of it on day one.