In case you missed it, IDW is set to publish a comic set within the world of the Netflix series Narcos, and Valiant is re-launching “Psi-Lords” with writer Fred Van Lente and artist Renato Guedes. Dark Horse also announced a new supernatural thriller, “Last Stop on the Red Line.” 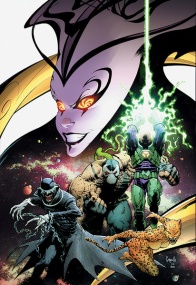 – DC has decided that 2019 will be “The Year of the Villain,” and plans to celebrate with a 25 cent special released just before Free Comic Book Day (similar to last year’s “DC Nation”). The special will push forward ongoing stories from “Justice League,” “Superman” and “Action Comics,” and “Batman,” with features from writers Scott Snyder, James Tynion IV, and Brian Michael Bendis and artists Alex Maleev, Jim Cheung, and Francis Manapul.

– British publisher Rebellion announced a wave of seven specials that will celebrate the history of the U.K. comic book industry, including “The Cor!! & Buster Humour Special,” “2000 AD Sci-fi Special,” and “Scream & Misty Presents The Thirteenth Floor.” You can get a look at the full line-up and release dates over at The Hollywood Reporter.

– Marvel announced that Spider-Man won’t escape the “War of the Realms” unscathed; the wondrous wall-crawler will feature in his own three-issue event tie-in titled “Spider-Man & the League of Realms.” Written by Sean Ryan and illustrated by Nico Leon, “Spider-Man and the League of Realms” will see Spidey leading the unlikely cross-realm team that has previously appeared in the pages of Jason Aaron’s “Thor.”

– Marvel also announced that they’re continuing their original “Star Wars” series with a new one-shot. “Star Wars” #108 will feature a number of original characters from Archie Goodwin’s ‘Crimson Forever’ storyline, in a new story written by Matthew Rosenberg (“Uncanny X-Men”) and illustrated by a host of artists (with a cover from Walt Simonson). ComicBook.com has more details.

– BOOM!’s “Hex Vet” is getting a second volume, according to the folks at Comic Watch. “Hex Vet: The Flying Surgery” will return readers to the Willows Whisper Veterinary Practice, where witches-in-training Nan and Clarion will do their best to rehabilitate an injured flying pig that may be more than it seems. The new volume will release in December.

– It seems that Batman and the Teenage Mutant Ninja Turtles just can’t get enough of each other; WB Animation has plans to adapt the heroes’ recent comics team-up into an animated movie, according to SYFYWire. The movie will follow the plot of James Tynion IV and Freddie Williams II’s 2015 miniseries, which saw the Turtles and Shredder come to Gotham. Notably, veteran Gotham voice actor Troy Baker will play both Batman and the Joker in the movie, marking the first time an actor has voiced both characters in one feature.

– Humble Bundle released a new START HERE! bundle that features a number of first volumes from a number of publishers, including “Saga” Vol. 1, “Lumberjanes” Vol. 1, “Deadly Class” Vol. 1, and “Empowered” Vol. 1, just to name a few. You can see the full list of included titles over at Humble Bundle.

– And finally, The Hollywood Reporter has word that Nickelodeon has almost nailed down a deal to produce a new Star Trek animated series. The show would target younger viewers in a way other Trek shows haven’t, paving the way for kids to become Trekkies at an early age.