Before the weekend we covered “The Life of Captain Marvel,” Dark Horse’s “Mysticons,” the “Doctor Strange” and “Nancy Drew” series starting in June, and the announcement of the first two Jinxworld titles at DC: Brian Bendis subsequently revealed there will be “Powers,” “Scarlet” and “United States of Murder Inc.” graphic novels later this year. 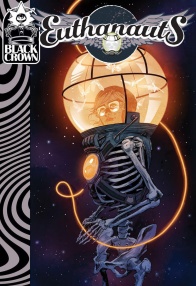 – During the weekend at Emerald City Comic Con, IDW’s Black Crown imprint announced two new titles: the first is “Euthanauts,” an ongoing series from writer Tini Howard (“Assassinistas”) and newcomer artist Nick Robles about two female explorers visiting the afterlife. The first issue is out July 4, and The A.V. Club have your exclusive first look at the artwork.

– The second is “House Amok,” a five-issue horror series from writer Christopher Sebela (“Black Crown Quarterly”) and artist Shawn McManus (“Fables,” “Cinderella”), which follows two twin girls on a road trip with their insane, conspiracy theorist family. Heat Vision received the first look at the artwork, and the first issue comes out in August.

– IDW also announced “Orphan Black: Crazy Science,” which will depict Cosima and Delphine’s quest to cure the other sick Leda clones around the world (as shown in last year’s series finale). The series is written by Heli Kennedy (“Orphan Black: Deviations”) and penciled by Fico Ossio (“Transformers vs. Visionaries”), and will begin in June.

– Did you know Lion Forge’s Catalyst Prime universe originally began in 2013? At ECCC, Lion Forge revealed “Quincredible,” one of the titles from the earlier iteration of their shared superhero universe, will join the rebooted line in August 2018, written by Mildred Louis (“Agents of the Realm”) and penciled by Selina Espiritu (“Brave Chief Brianna”). They also unveiled much more, including that they will publish the second volume of Yehudi Mercado and Bachan’s “Rocket Salvage” (originally a BOOM! title) from July.

– Warner Bros. have given the Vertigo Comics adaptation The Kitchen – starring Tiffany Haddish and Melissa McCarthy – a release date on September 20, 2019. Sony have also scheduled The Crow remake (starring Jason Momoa) for a month later, on October 11, 2019.

– At Women Write About Comics, Vault Comics revealed their Women In Front Covers Initiative, where every title they publish this year will have at least one variant cover by an all-female team (penciler, inker and colorist).

– On Friday, we asked which of Marvel’s “Fresh Start” titles that have been announced so far were you were most excited for. Jason Aaron and Ed McGuinness’s “Avengers” leads with 19% of the vote, with Ta-Nehisi Coates and Leinil Yu’s “Captain America” and Al Ewing and Joe Bennett’s “Immortal Hulk” tied for second place.

Welcome back to The Rundown, our daily breakdown on comic news stories we missed from the previous day. Have a link to share? Email our team at rundown@multiversitycomics.com.– Mike Mignola has announced via Twitter that he is going to start an eBay auction of his sketches, with 100% of the proceeds going to Jose Andres’s […]