In case you missed it, DC Comics announced an oversized “Wonder Woman” #750 anniversary issue for January, Oni Press will publish a “Aggretsuko” comic book, and the winners of the 2019 Ringo Awards from Baltimore Comic Con were announced. 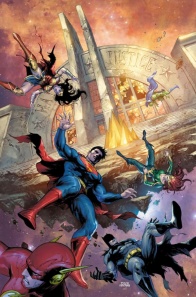 – From Newsarama, DC announced in their January solicitations that that month’s “Justice League” #39 will be Scott Snyder’s final issue on the series. Snyder’s ‘New Justice’ opus will end following the ‘Justice/Doom War’ storyline. Snyder wrote on Twitter that his story will “level up in the new year and create a bigger stage for things.”

– DC’s January solicits also revealed that Brian Azzarello and Emanuela Luppachio’s “Birds of Prey” ongoing has shifted to a 96-page one-shot. The series was originally announced in July as an ongoing, but orders were cancelled as the comic book series moved to DC’s Black Label line. No reasons were given for this second shift in the project. We’ll have more on DC’s January reveals in our Soliciting Multiversity column.

– Comicbook.com has a preview of the first issue of “Iron Man 2020” #1, with a checklist for the miniseries’ six month span. The checklist revealed new comic books like “Force Works 2020,” “Machine Man 2020,” “Ironheart 2020,” and others. The main “Iron Man 2020” series will be written by Dan Slott and Christos Gage with art by Pete Woods.

– In television news, Arrow showrunner Marc Guggenheim officially revealed that Arrow (which concludes this season) will be spinning-off into a new series called Green Arrow and the Canaries. Guggenheim tweeted a poster in the style of a comic book cover with art by Emanuela Lupacchino, Dave McCaig, and Brett Breeding, which features the new Green Arrow and Black Canaries, played by Katherine McNamara as Mia Smoak/Green Arrow, Katie Cassidy as Laurel Lance, and Juliana Harkavy as Dinah Drake. Green Arrow and the Canaries does not currently have a release date.

– The Boys showrunner Eric Kripke tweeted a photo of himself and Patton Oswalt, revealing that the actor has a secret role in the second season of Amazon Prime television show. A premiere date for the second season has not been announced.

– Marvel announced that Gillian Jacobs and Paul Scheer will be joining the nonfiction Disney+ television show Marvel’s 616 with Jacobs attached to direct the first episode. Marvel’s 616 explores the intersection between the Marvel comic book universe and the real world by diving into topics like Marvel’s influence on hip hop culture, the cosplay community, and illustrators who work around the world. Jacobs’s episode, entitled “Higher, Further, Faster,” will investigate women working in what are perceived to be male-driven industries. Marvel’s 616 will stream exclusively on Disney+ in 2020.

– Variety exclusively reported that Naomie Harris is in talks to play Shriek in the sequel to Sony’s Venom film starring Tom Hardy, Michelle Williams, and Woody Harrelson. Andy Serkis is set to direct the film. There is no official release date.

– The Hollywood Reporter wrote that director Matt Reeves has announced his musical partner, Michael Giacchino, will be joining him in on The Batman. Giacchino has composed many of Reeves’s films including Cloverfield, Let Me In, Dawn of the Planet of the Apes, and War for the Planet of the Apes. The Batman will star Robert Pattinson as Bruce Wayne with Zoe Kravitz as Selina Kyle, Jeffrey Wright as Jim Gordon, and Paul Dano as The Riddler. The Batman is set to debut June 25, 2021.

– Deadline reports that Disney and Tencent publishing are partnering in translating 40 Star Wars novels into Chinese and collaborating on making the first Star Wars story in China. Deadline said the partnership is meant to create a fanbase in China, where the Star Wars franchise has had some difficulty at the box office. The stories will roll out on China Literature’s online platform.

– And finally, the American Library Association announced a new “Best Graphic Novels for Adults” reading list. The inaugural list will showcase “the graphic novel medium, raise voices of diverse comic creators, and aid library staff in the development of graphic novel collections.” Readers can nominate comic books published between September 1, 2019 – December 30 2020, and apply to volunteer to sit on the selection committee.