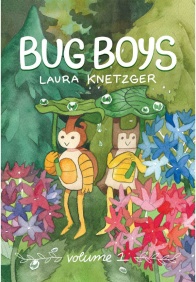 Welcome to Bug Village! This sleepy little village is home to Stag-B and Rhino-B, aka the Bug Boys! These two best friends love adventure and exploring the nooks and crannies of Bug Village, the surrounding forest, and their own minds. Along the way, they meet new bug friends (like spooky Dome Spider and shy Dragonfly), face their fears (Bees! Termites! Self-doubt!!), and see their friendship grow ever stronger. Bug Village is much bigger than it seems, let’s explore!

Bug Boys volume 1 collects all of the Bug Boys’ adventures to date, including some never before seen in print!

Nominated for an Ignatz award this year, “Bug Boys” Vol. 1 is a comic that, at first glance, appears to be a simple, slice-of-life comic ala Animal Crossing about two bug friends. While this is absolutely the case, and I mean that in the best of ways, the simplicity and episodic nature of the collection belies a deeper, more profound philosophy to life. It takes a bit to get there, though, as the first few chapters focus on building the world and crafting a relationship between the readers and Stag-B & Rhino-B.

The first four issues aren’t very long and it’s apparent that Knetzger doesn’t trust her ability to convey meaning solely through her art yet, as the bug boys talk through many of their actions and feelings. However, it’s endearing and firmly establishes the characters as young and still learning to find their places in the world. They’re carefree, able to float from treasure hunt to beach day, and to express a whole range of emotions in a short period of time. This leads to a few of the early chapter’s best gags, most of which are thanks to Knetzger’s simple drawings, which allow her to convey a lot of information with very few lines.

By issue #5, the stories begin to get longer and open up more, with issue #9 being, perhaps, the longest. I keep using issue to describe the chapters as this is a collection of twelve of Knetzger’s “Bug Boy” comics. As such, we can see her hone the message of the series throughout the volume and it is easy to watch as her artistic abilities improve and solidify. This is most apparent in issue #10.

The basic premise is that, after a harvest, Rhino-B wants to have a tree-climbing contest and ends up stuck in the tree. When there, he contemplates the vastness of the forest and the worry that it may be too big for his mind to unfold it, that he’ll get lost in the largeness of it all and never want to go home. It’s a fear Dragonfly has too.

While about as short as issue #2, the treatment of the subject matter couldn’t be more different. Panels are allowed to be silent, the dialogue is trimmed and sharp, and events flow easily from one panel to the next, with very little friction. The action also slows down, letting the characters sit with these complex emotions. Dragonfly’s answer to the fears, that “you just can’t let it win,” is not an easy answer but it is a truthful one. It rejects simple platitudes and the mocking of fears that plagues many all-ages works.

In an interview with The Beat, Knetzger brings this idea up and talks on how she wanted “Bug Boys” to be a place where her charcters could explore these bad feelings without always ending on a forced note of happiness. It’s telling, then, that as the issues go on, they don’t end with a smile but they do end one a note of hope.

Issue #10 ends silently, with Rhino-B rejoining his friends, melancholy etched into his button eyes and line mouth but is preceded by him climbing down the tree on his own. Issue #9, which addresses depression, jealousy, and the dangers of hiding behind callousness, ends with an assertion of life and an acceptance of the conflicting, difficult emotions within Rhino-B instead of a denial of them. Yes, it ends with everyone smiling around the table, but the framing is one of a quiet hope instead of a loud declaration of resolution thanks, in part, to Knetzger’s lettering.

Aside from the artwork, the most unique thing on the pages is Knetzger’s utilization of lettering and word-balloons to convey tone and add hints of character to everyone’s dialogue. Characters may not have unique fonts or balloons but the small, and large, variations that occur thanks to her hand-lettering breathe life into their voices. Cursive and print blend, usually with double L’s, as if the words are slipping across the page, balloons shift from clouds to the regular circles as enthusiasm dies down, and moments of extreme fear or excitement elicit special fonts or full cursive; it turns the words into something greater, which is a talent not every artist is capable of.

Grounded and tempered, Knetzger’s “Bug Boys” is very different than her surreal, raw meditation on depression and anxiety, “Sea Urchin,” retaining instead a fantastical sense of adventure and contemplation. Unafraid to make difficult emotions accessible while still remaining positive, “Bug Boys” is a moving, light, meaningful all-ages comic that earns the moniker. Who knew Bug Village could be so great?

TKO Studios burst onto the scene late in 2018 with a new business model: 4 titles, six issues each, released in single, trade, and digital format all at once. As such, they fell out of our usual review cycle. Let’s rectify that and see if the pulp-inspired Wave 1 title is as fearsome as its title suggests.

In Alex Alice’s “The Castle in the Stars: The Space Race of 1869,” we are invited into a world where the vision of the cosmos in the nineteenth century is not fanciful, but rather a scientifically accurate hypothesis. The planets closer to the sun are indeed younger and could be teeming with prehistoric life, while […]

While perusing my shelves to pick out a comic for reviewing, I found myself unable to decide on one because there were so many possible criteria for choosing it. Should I return to an old favorite just out of nostalgia, try a classic I had missed out on, or pick a comic to review purely […]