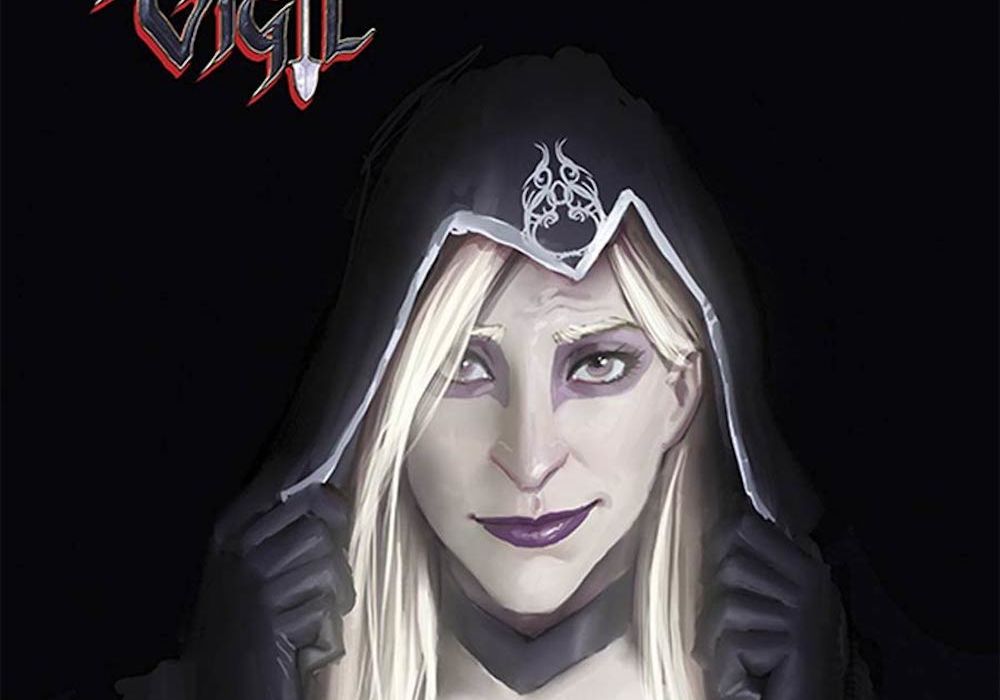 Merge actual, physical hearts with a hefty emotional one in the extant arc of Stjepan Sejic’s “Death Vigil!” 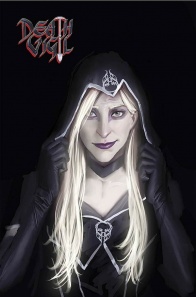 Gifted? Join the Death Vigil in their ongoing war against the ever-growing power of the Primordial Enemy! The only catch is you have to die first. Become a corporeal immortal Death Knight, and obtain reality-altering weaponry in the neverending battle between Good and Evil.

When it comes to “Death Vigil,” it is relatively difficult to really pin down a specific genre. Is it a relatively hopeful Lovecraftian horror? Is it bloody, one-liner-filled action? Is it lighthearted comedy? Is it even some bizarre type of a “slice of life” tale at times, when divorced from the aforementioned horrifying or action-packed elements? Who really cares what specific niche it fits into, when readers comes across a story this fun and imaginative, a plot this diverse? As written, the chronicles of the eponymous Vigil run the gamut of a swathe of different narrative styles and emotional beats, all orchestrated masterfully by its multitalented creator, Stjepan Sejic.

One of the core principles in the success of “Death Vigil” in its first (and so far sole) arc is Sejic’s effective use of character. From the various members of the Vigil itself to their antagonists amongst the Immortal Enemy and the various bystanders outside of the two, every named person, no matter how small their role, has their own individual quirks, allowing even their darkest of battles to have key pieces remain relatable nonetheless. While superpowers are used throughout the arc, each one of them is essentially tied to who its user is, allowing the powers themselves to give a greater knowledge of the personality and past trials of individual people rather than having their personality show what they can do with their powers, essentially helping to tell the story of individuals and build upon the core elements of the fictional world at the same time.

Another portion of this characterization is a proverbial “spectrum of relatability.” Through a variety of life forms, Sejic casts an essential humanity to even the most inhuman, giving them time away from their jobs hunting necromancers to indulge in their hobbies or just hang out and have fun with one another, among other things. Meanwhile, some characters, including but not limited to most villains of the tale, are deliberately set apart from normal “humanizing” traits of mortal life, allowing them to indulge in their own disturbing nature and have readers remain well aware of the danger faced by the Vigil itself. Even in the case of our protagonist, Clara Jenkins, the fact that the role of narrator is portrayed by deuteragonist Sam Lewis, and not her, enables readers to be aware of both her status as a novice to the workings of the Vigil as well as to be increasingly aware of elements to her abilities that go beyond the norm in disturbing ways of which even she remains unaware. Such a proverbial “spectrum” can adjust readers’ sympathy, hatred, wariness, or any other emotional reaction regarding one character or another at any given moment.

Sejic is very famous for his artwork, and every page of “Death Vigil” tells us why. From extreme detail on individual people to very animated gestures, everything about the illustrations fits well into any one of the myriad genres showcased within. High-octane action would not work nearly as well without the fast pace of character movements, nor would shocking revelations or comedic timing coalesce quite so easily without facial expression and body language both being as perfectly arranged as Sejic portrays them. While his later work on the likes of “Aquaman” shows how he can tell a story without any words at all, the way in which he weaves existing dialogue together with such expressive, at times even hilarious faces helps to sell a story as if readers were watching a feature film, not still images in an eight-issue graphic novel.

While the varied emotions are useful, another element some may overlook is Sejic’s effective use of his pseudo-realism to give the various agents and creatures of the Immortal Enemy a truly horrific appearance. From pincers to tentacles to tendrils, from exposed organs to eyes or mouths where there should be none, from multiple heads to gargantuan size, and much, much more beyond, the ways in which Sejic shows his expertise regarding terrifying forms is enough to make even the strongest of stomachs queasy. It is no wonder that the mere appearance of such monsters can drive those outside of the Vigil to madness or death alone, such that they all seem to be crafted from the thoughts of olden times, or even from nineteenth century H.P. Lovecraft.

Panel structure also helps to sell the wide variety of scenes in “Death Vigil.” Depending upon the scene and the panel’s purpose within it, the actual form of said panel may change as well as its position. An arc of several consecutive still shots can give an impression of both speed and a “slow motion” effect in an intense moment, while a circle behind a single individual can instead show a wide scope of knowledge during an in-universe infodump. One panel may crash into another to give the impression of someone or something infiltrating a scene’s mood or tone, or may jump back and forth in a zigzag fashion down a page to enhance reader’s sense of disorientation alongside the characters shown.

Even the marvelous illustrations wouldn’t have quite the same effect as they do if not for the colors Sejic utilizes to enhance them. A warm brown inhabits the halls of the Vigil’s home to keep the overall feeling of hospitality amongst their members. The colors of various outfits seem a bit muted, but mostly in contrast to the brighter, more colorful world around them. Even when placed amongst mortals with their higher variety and the realistic hues and tones of a modern city, everything still relies on the concept of otherworldly, amazing fights and intensely emotional moments in clear view of set pieces that are far more familiar in a mundane sense

The use of glow amongst colors helps to enhance the feeling of the supernatural within “Death Vigil.” A red, malignant lightning crackle of power may work with the necromancers, while a more fluid purple can instead focus many forms of the Vigil’s power sets. By using these glows, Sejic is able to emphasize how the struggle between these overwhelming forces are far beyond the range of mortals.