Time gets wibbly wobbly timey wimey in this issue – literally. 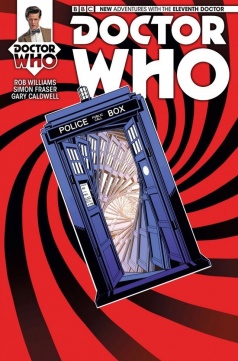 !REVERSE IN GOING IS TARDIS THE INSIDE TIME THAT REALISES DOCTOR THE WHEN STRIKES TERROR The Doctor is the only one who realises that the flow of time in the vortex has been disrupted, but can he uncover the cosmic culprit and put causality back on the right track – before Alice and her fellow TARDIS travelers are de-aged right out of existence? Rob Williams and Simon Fraser spin a mind-bogglingly unique tale that cannot be missed!

If Yoda ever wrote a comic, it would probably look like this.

“Space And Dimension Relative And Time” is a story told backwards, starting at the very end with John Jones dead, and then tracing the steps back to how we got there, with only The Doctor aware that time is moving backwards, using his “future” knowledge to manipulate the past to save not only John Jones and the TARDIS, but the dying planet Datastore 8. The culprit that made time get literally wibbly wobbly? A small little Time Vortex Leech hanging out on the TARDIS exterior.  We’re not sure why the leech was there, or if its effects on the TARDIS were intentional.  Perhaps in the end, as The Doctor hypothesized, it just wanted to go somewhere.

Thus far, this is the first story that does not involve uber-corporation SERVEYOUInc. It’s self-contained, which works as both blessing and curse.  This issue starts off the “Doctor Who: The Eleventh Doctor” second trade, so it’s presumably established as a jump-on point for new readers. But there’s not enough exposition here to make it jump on friendly, and the backwards nature of the story, right down to its presentation with descending page numbers and first page opening with “The End.” There’s even continuity gaps that may leave existing readers confused.  John Jones is in full on David Bowie glam mode here, a jarring transition from the last issue where his look was still mop-top early 1960s. We are unsure as to when and why he got the inspiration to go Aladdin Sane, with only a throwaway line indicating he got his new look from that “last planet.” Was it the space station from the previous adventures, or somewhere else? With the nature of time in this issue, such continuity gaps probably should be expected.  Who expects time like this to make sense? I do muse on whether or not this is the right time or place for what could be considered the “bottle episode” of this series (if such a thing exists in comics).

Simon Fraser is back on art duties for this issue, and I’m certainly having a hard time deciding who I like better drawing the Doctor: him or Boo Cook from last week.   He’s certainly improved in getting that raggedy man look of Matt Smith in some places, but it’s still wildly inconsistent in others.  Still, I give him credit for working towards improvement, and things can only go up for him from here.  The trick will be to keep his look consistent so that when art teams do switch off from issue to issue (as they seem to do), the transitions aren’t as jarring. Where Fraser and the rest of the art team let their creative boundaries stretch is the TARDIS.  Using the backwards story structure to their advantage, they make their TARDIS a labyrinth of corridors and rooms, with no two looking the same. It brings a rich interpretation of the “bigger on the inside” TARDIS that can get lost in two-dimensional storytelling.

The “villain” in this issue, the Time Vortex Leech, is one I would love to see make the jump to TV.  I can think of any number of episodes where the Vortex Leech would have made things very interesting for the Doctor, and not just Eleventh Doctor stories either.  “The Empty Child/”The Doctor Dances” from the Christopher Eccleston era had a Time Vortex at its heart. Could a Leech have attracted the Doctor and Rose through the Vortex to 1941?  What effect would the Leech have on the ontological paradox that is “Blink” or the season long “The Trial of a Time Lord” arc?  I don’t think any comic characters have crossed over to TV yet (if I am incorrect, someone please let me know in the comments).  I think we’ll see more of it with the Thirteenth Doctor as Titan is making a very good faith effort to connect comic and TV show in deeper ways.

For a palate cleanser between two parters, this issue serves its purpose. Was it an entertaining palate cleanser?  For someone like me who is invested more in a long term story that the first five issues set up, I’m left feeling disjointed just when I want to get into the deeper mysteries of SERVEYOUInc.

Next week, it’s another two-parter with issues #7 and #8, “The Eternal Dogfight” and “The Infinite Astronaut.”

If you’d like to read along with me this summer, all issues of the series, single and trade, are available on Comixology. If you are in the United States or Canada and your local library has access to the Hoopla Digital service, you can make Alice happy by borrowing single issues and trades from the series via your local library.