There are a lot of comics out there, but some stand out head and shoulders above the pack. With “Don’t Miss This,” we want to spotlight those series we think need to be on your pull list. This week we are looking at the newest run of “Daredevil.”

Who is This By?

“Daredevil was relaunched with “Sex Criminals” and “Spider-Man: Life Story” scribe, Chip Zdarsky in the writer’s seat and providing occasional covers and a backup in the first issue. Zdarsky is constantly proving that there is much more to him than just gags in his quiver as he has really spanned the Marvel Universe with his works ranging from the humor of “Howard the Duck” to the bleakness of…well… “Daredevil.

Joining him on artistic duties has been a great team of relatively up and coming artists including Marco Checchetto who has done a number of covers and a “Gamora” series, Lalit Kumar Sharma (inked by Jay Leisten) who is quite new, and Jorge Fornes who blew readers away with his Mazzuchuelli inspired work on “Batman” with Tom King. “Daredevil has been colored so far by industry vets like Sunny Gho, Java Tartaglia, and Jordie Bellaire who provide a great tone for the book and lettered by who seems to be one of the hardest working letterers in the biz, Clayton Cowles.

What’s it All About?

Matt Murdock is Daredevil and had been for a while. After nearly dying, he finds it harder to get back into the hero business and it really wears on him to the point where he makes mistakes. Huge mistakes that lead to a criminal dying. The series follows what Matt Murdock does in this situation, through confrontations with other heroes like Spider-Man and certain anti-heroes like the Punisher. “Daredevil” gives the classic pulp and grit that has long been associated with the character but in really fresh ways that test the core of the character and put Matt Murdock through the wringer.

What Makes it So Great?

What is interesting about “Daredevil” is that describing the plot points past the first arc of the series feels like I could be describing any “Daredevil” run since the 80s because Zdarsky and co. manage to hit all the classic story beats but they are done in incredibly different ways. There are a lot of the “tropes” associated with Daredevil, whether from the Netflix show or his classic runs in this book but what makes them hit hard are the contexts they are presented in. I feel like this series could be described as a “Daredevil Remix.” Without spoiling anything, the series presents so many familiar hallmarks that aren’t just exclusive to Daredevil but to gritty superheroes in general. Matt is put in a number of really fresh and inventive situations and Zdarsky explores so many new ideas within a very familiar template of guilt, Catholicism and duty. 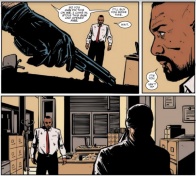 New characters also add to this fresh take. Honest cop, Cole North, who has a strong moral code that doesn’t have room for cops on the take or Daredevil makes a lot of enemies. North’s character is an archetype that reminds me most of the Netflix adaptation of Daredevil. His honesty against well-connected criminals builds to creating claustrophobia and an inevitability to see what falls first, his values or him. Also joining North is Mindy Libris, a bookseller who catches Matt’s interest before dragging him into a part of his life he tried to leave behind.

Artistically, “Daredevil” has been doing a lot right artistically, with a seemingly regular rotation that brings to mind the rotating artists on “Batman” at the moment but perhaps done better. Each artist brings their own style to the table without any whiplash from differing styles. I was surprised to learn that the colorists were not the same with each issue which brings further respect to the clarity of the tone of this book and that each creator can tap into what exactly this book is supposed to be. The closest to a regular artist on the book would be Marco Checchetto whose work seems perfectly fitted for this book. He brings a scratchiness and texture that puts the “grit” in the “grittiness” of “Daredevil.” While Checchetto may be a regular, Fornes and Bellaire’s “Daredevil” #10 was a stand out for the series so far. As mentioned before, Fornes clean, dark linework and use of shadows bring to mind David Mazzechuelli which is never a bad comparison on a Daredevil book (or in art… ever). Along with Jordie Bellaire’s excellent colorwork, Daredevil #10 is a must-read by far. 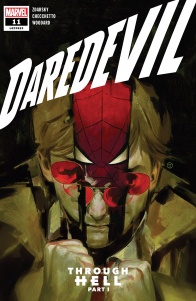 The first five issues are collected in “Daredevil by Chip Zdarsky Vol.1: Know Fear” (I just got “Know Fear/ No Fear”…) available in comics shops and ComiXology. “Daredevil” comes out monthly and coming out today is “Daredevil” #11.

Don’t Miss This: “Runaways” by Rainbow Rowell and Andrés Genolet

There are a lot of comics out there, but some stand out head and shoulders above the pack. With “Don’t Miss This,” we want to spotlight those series we think need to be on your pull list. This week we are looking at the latest run of, well, “Runaways.”Who Is This By?“Runaways” is written by […]

Don’t Miss This – “Marauders” by Gerry Duggan and Matteo Lolli

There are a lot of comics out there, but some just stand out head and shoulders above the pack. With “Don’t Miss This” we want to spotlight those series we think need to be on your pull list. This week, we look at “Marauders” by Gerry Duggan, Matteo Lolli, and Federico Blee.Who Is This By?Gerry […]

There are a lot of comics out there, but some just stand out head and shoulders above the pack. With “Don’t Miss This” we want to spotlight those series we think need to be on your pull list. This week, we look at “Lazarus” by Greg Rucka, Michael Lark, and Santi Arcas, with particular concentration […]