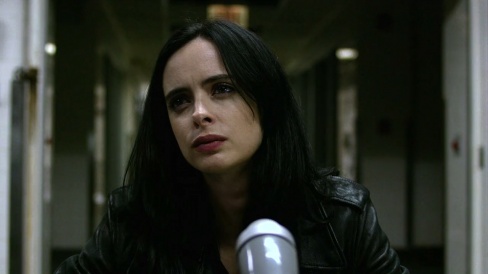 1. The Monster In The Cage

“A.K.A. Sin Bin” picks up right where the last episode ended and Kilgrave has been successfully captured and placed in the sealed room, unable to use his powers. Jessica spends the episode torturing him with his own childhood videos, forcing him to relive the experiments over and over and over. On top of this, the room is flooded a bit with an electrical current so that Jessica can shock him with the press of a button. Jessica really has fun with this and ends up shocking Kilgrave quite a bit. She’s torturing him and you can see the joy she takes in it. As I’ve mentioned, Jessica is not your typical superhero. This doesn’t necessarily make what she does to him right but because of the approach, it’s not difficult to have sympathy for her.

2. Hope’s Fate In The Balance

Jessica has Kilgrave right where she wants her but that’s not enough. Hope is still in prison and there’s no way to prove that Kilgrave controlled Hope without video of him doing something. To make matters worse, Jeri informs Jessica that the D.A. has made a deal and they only have 48 hours to accept or reject it. Jessica is now tasked with getting Kilgrave controlling people on camera which is a lot easier said than done because she also needs someone to witness it. At one point, in a chilling scene that again tries to make you feel bad for Kilgrave, Jessica goes into the room and Kilgrave does nothing, which just infuriates Jessica to the point where she almost kills him. Trish has to stop her by shocking her but overall, I love this scene. Revenge is a complicated idea but after everything Kilgrave has done to people, I kind of got a sick joy out of seeing him get beat up so much. David Tennant in this episode did everything perfectly. You can’t feel bad for him but damn does he try. When he stands there and does nothing against Jessica, you realize how weak he is unless he’s speaking and you can see pain in his eyes as he listens to the video over and over again. Hope is never in this episode but she’s a major part of it. I can’t see something happy in Hope’s future but I sure hope I’m wrong.

Will did survive the explosion but his friends didn’t. Trish finds him and has to rush him to the hospital because he is in really bad shape. Once at the hospital, Will begins freaking out that he needs a very specific doctor to help him. Will’s doctor was an actual doctor but not someone that anyone had access to. His injuries were so bad that he’s put himself back into the program that he was in and here’s where his comic book counterpart takes form. Nuke was a villain who had a big American flag painted right across his face because of course he did. Since this is the MCU, a more “practical” effect was used and Will’s doctor offers him medication that would help enhance him and balance him out with each color (red, white and blue) having a different effect. Will takes the red pill to heal up faster and get back in the game so he can kill Kilgrave. Will’s heel turn has been coming for  while but it’s not being mishandled. Will has spent a lot of time being a part of this little group so it’ll be interesting to see how much he messes things up and if he will be redeemed in the end. This is really a drug addiction coming up again in this man’s life so there’s a little sympathy for him despite the character not really clicking with me.

Jeri and Wendy’s divorce up until now had no huge implications for the bigger plot until this episode. Jeri ends up striking a bargain of sorts with Kilgrave but we don’t know what that entails. What we do know is that she’s willing to sell out Hope and everyone else in order to get what she wants. Jeri helps Kilgrave escape in the end but this has it’s own section in this review because it’s really important to note how abusive and manipulative Jeri has proven to be. There are things about her to like but she’s proven to be hurtful to Wendy and even to an extent, Pam. She’s sure not keeping Hope high on her priority list and her admiration of Kilgrave’s powers is understandable (to a certain point) but not excusable. Jeri stops the electrical current from working in Kilgrave’s cage and may have done more harm for herself than good because she underestimated him.

Jessica, Trish, Jeri, Kilgrave, Clemons and Kilgrave’s parents are all here now and this is a huge moment for show and sets up the ending of the season. Kilgrave’s parents go into the room with him to try and get him on camera but also to bury the hatchet. It turns out that Kilgrave was always a trouble making kid and the experiments were meant to help him. Kilgrave was never a “good guy” and he takes revenge on his parents by making his mother kill herself. Thanks to Jeri, he escapes but not after he tries to make Trish kill herself and takes control of Clemons and his own father. He goes on a war path but when Jessica grabs him, we find out that his power doesn’t work on her anymore. HUGE TWIST THERE RIGHT? The game has changed and maybe even in Jessica’s favor but an angry and unhinged Kilgrave is not something anyone is going to want to deal with head on.

What did you think of this episode? Let me know in the comments below!