A brilliant scientist – his best friend – the woman he loves – and her fiery-tempered kid brother! Together, they braved the unknown terrors of outer space, and were changed by cosmic rays into something more than merely human! Mr. Fantastic! The Thing! The Invisible Woman! The Human Torch! Now they are the Fantastic Four…and the world will never be the same again!

And now their journey comes to an end. At least this installment of it does. That’s of course the wonderful thing about comics and universes, they never end. But Hick-F4M ends with this closer today.

Throughout the last five weeks we have been journeying through this almost 70 issue installment, from it’s beginnings with ‘Dark Reign,’ to Reed’s first attempt to solve everything, to Johnny’s death, to the start of the Future Foundation, through a war, and now to the last 14 issues as Jonathan Hickman and a stellar team of artists wrap things up in a bow to hand-off rather conveniently before the Marvel NOW! relaunch begins a new age of “episodic” storytelling and relaunches which will see Hickman’s “Avengers” and “New Avengers,” the Brian Bendis X era, and the kick off of Jason Aaron on “Thor: God of Thunder.” All of these issues serve, more or less, as an extended coda, and I mean that in the best way. The war that had been built up ended with “Fantastic Four” #604 and “FF” #16, bringing a sort of return to a new normal. Johnny’s back and the Future Foundation are permanently set, so what is there to do? Quite a lot actually it seems. These issues are all one or two issue bits that folds up the shirts and leaves everything neat for the next team to come along, while also forefronting what’s been best about this run: family. 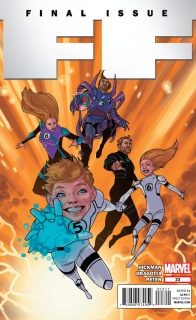 These endings were not what I was expecting, and yet thinking just a little bit about it there was really no other way this could (or should have gone). With the end of the War of Four Cities, I kept wondering what big installment Hickman and the artistic talent on these books would be building to conclude this run. I was sure it had to be a final showdown between Reed and Doom and his new Parliament. That’s what we expect right? The anti to continue to be ratcheted up? The scope to widen, the story to be as big as possible. Everything dies. Everything lives. That means fireworks, bombs, and interdimensional nukes or something right?

That’s in fact not what we get at all. All of these issues are one-shots or short stories that it seems the creative team was dying to get out either to “tie-in” to the big event of the moment “Avengers vs. X-Men” (which Hickman co-wrote), or to put a cherry on the relationships that had been hitherto established. We check back in with Ben (#605), the Inhumans (#20-21), cap off Nu-World (#609), have resolution with The Wizard (#610, #22) and say goodbye to the future Nathaniel, Val, and Franklin (#611, #23). All that and much more. There’s a sense here that there could have been more of these types of stories, that Hickman had either more one-offs planned or a supply or short-arcs at his disposal. While the ending in no way feels rushed, which is the brilliance of this slow burn, it’s clear this status quo could’ve continued to be mined. It gives me a lot of hope and excitement for the future of the “X-Men” under Hickman’s reign based on comments he’s made about occupying a status quo as long as Marvel will have them.

First off, Hickman just knows how to write and use time well. I don’t mean that in time or time travel as plot devices, I mean that more in these stories portray a level of imagination and world-building that are correlated with how time passes. There’s an attentiveness to what a world might look like and how characters continue to change and grow over time. In #605, we’re treated to a story of Ben living for another 3000 years, and the way that the story is told, the way we see Ben change as a future New York changes and the Earth changes is just done brilliantly. It’s not so much time travel as it is time voyeurism. Same goes for how the future Valeria and Franklin interact with their younger selves and parents. Val is cold towards her younger version, while Franklin just wants to foster more of himself and his creativity. All that is because there is a clear version of what all these different worlds and timelines look like and how they play into one another. While time hardly ever really passes in the Marvel and DC universe, what has happened over the course of this run is nothing less than a clearly mapped (probably with multiple maps) expertly timed and placed development of these characters, them learning and growing in the present and their learnings and growth on display for possible futures.

The other thing that struck me in these final issues was just how hilarious and charming they are. I don’t laugh out loud bellow laugh a ton reading comics, but I about lost it four or five times over the course of reading these. “FF” #17 and “FF” #21 are the two funniest issues of this entire run, both having me in stitches at Spider-Man’s expense. Hickman’s Peter is awkward and clumsy in the no filter way rather than the spazzy way, and it’s still wonderful. All of his internal debate about kicking Johnny out of his apartment is great, that whole issue is just one long gag, but it works so well. #21 is a lot more serious as it finishes off the Inhumans plotline from this entire run (and sets up more Inhumans for Hickman with “New Avengers), but the two issues build off each other so well. From Spidey making out with that Inhuman in #17 to her teasing him about his butt, it’s just so genuinely funny. 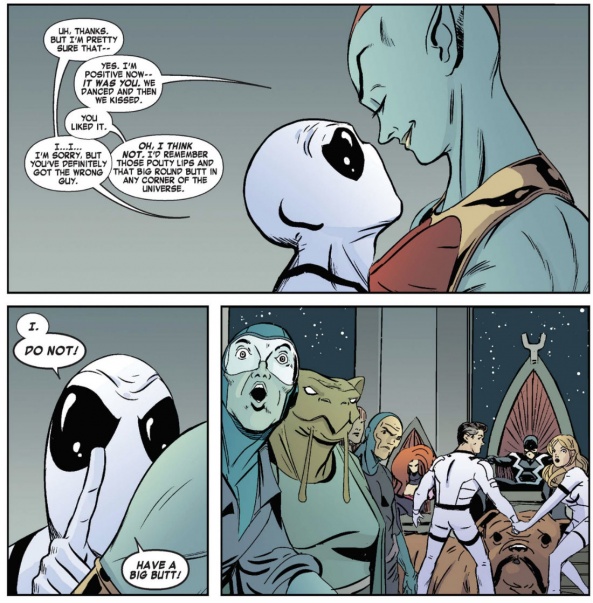 Of course none of these things can be sold without the artistic talent on these books, and it speaks volumes that the best of the lot of these issues are the Nick Dragotta ones. All of the Dragotta issues of this whole run are the best of the bunch, with the Steve Epting issues close behind (partially because he might’ve drawn the most). Dragotta reaches another level here at the end of this run, stylistically becoming closer to what his work on “East of West” will be when that comic debuts in the near future from this point. His earlier issues were a little bit scratchier, while here at the end his Kirby-influenced work has a much crisper and set line. Some of that may have to do with the coloring, but comparing these issues to “Fantastic Four” #588 there’s a marked difference. It’s really fun too to see earlier versions of Walta and Araújo here as well, as they’ve worked on some of my favorite books of the last few years. 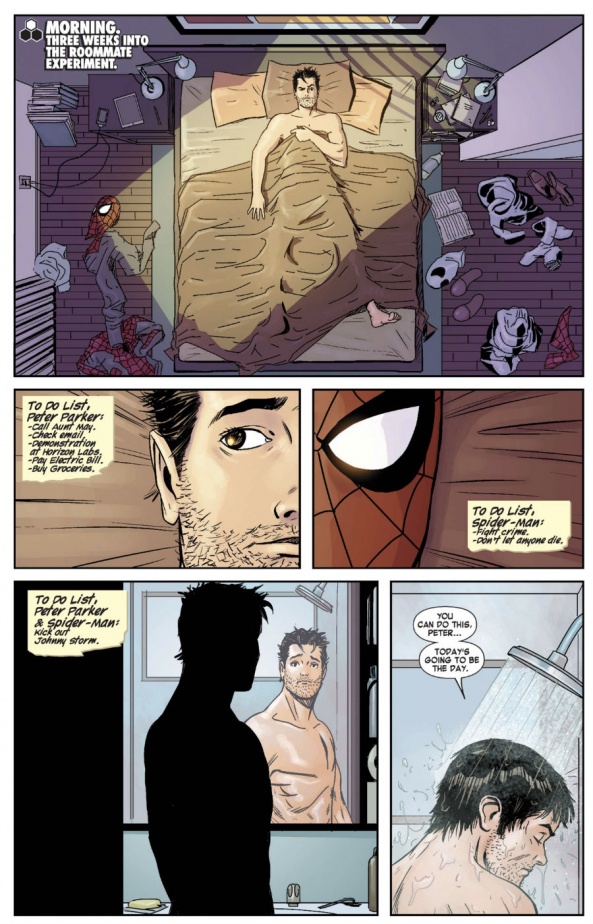 T’Challa finally makes his debut here in the home stretch. One of the aspects of this run that people told me about when they described how great it was was the work that was done with Black Panther and Wakanda. There was much discussion when Black Panther premiered in theaters about how much of T’Challa’s characterization and some of the concepts in Wakanda were due to Hickman. I kept waiting for Black Panther to make an appearance, and what we get here are just three issues that pack a punch. Much of the Black Panther stuff will be built out in “Avengers” and “New Avengers,” but here we get older gods, the Necropolis, and the flowers to cross over into the dead, all things that featured into the movie. There are also the seeds here to “Avengers vs. X-Men” (being published simultaneously) and to larger plans for the next phase of Hickman’s Marvel story. I was surprised how little there was, yet what is here, much like the Universal Inhumans nuggets from way back at the beginning of this run, is purposeful and ready to be built up and explored. We get a full story in Wakanda, and we’re promised much more to come. 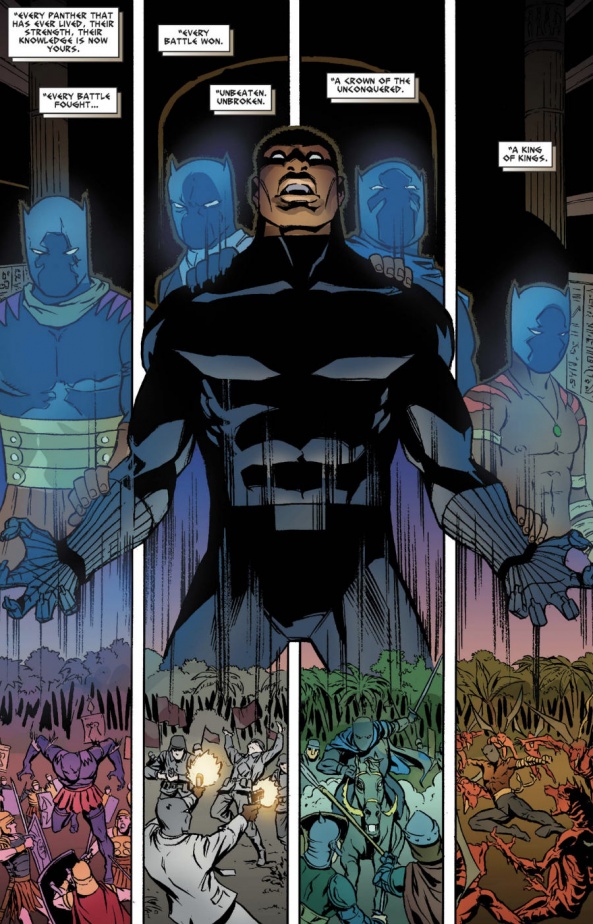 Finally, the finale. Like I said, there’s far few fireworks and much more forgiveness. Doom replays Genesis 1 in another reality and fails, which leaves the future Val to drag Nathaniel and Reed along to save him. He’s an asshole, and there’s no attempt to change that, but every chance to humanize the megalomaniacal pragmatist. Reed doesn’t doom Doom. He saves him. Because that’s just what heroes do. This also deftly sets up the Doom we’ll get in “Avengers,” “New Avengers,” and “Secret Wars,” and having read this makes me want to march right into those with this new knowledge.

Ultimately, the story ends with Franklin and his older counterpart building worlds and going on adventures. It ends in rebuttal to how it began. As the older Franklin narrates, “Intelligence without Imagination is pretty much useless.” He goes on to say in the next panel, “Creating is harder than knowing.” As someone who is currently in graduate school, this hit me deep in the feels. Reed starts out this whole show trying to solve everything, and he can’t, because there is no solving everything, there’s just solving better. His choice to return to his family is not an abandonment of moral responsibility to the multiverse, but a realization that there is no point to saving everything if not everyone is going to be there when everything is saved. Franklin, whose powers are literally to create and warp reality knows this, and needs it to be cultivated. I wrote early on, after the first arc, that, “The price of being human is dissatisfaction.” But that’s not entirely true. The price of being human is imagining that there are better ways to be human, that the world could be better. The price of being human is imagining that there’s more. And maybe this can lead to dissatisfaction, and suffering may be constant, but when we aren’t cultivating a sense of adventure, hope, promise, purpose, and life, then we’re not really doing this human thing properly. Everything dies. Everything lives. So what? You can run headfirst into tomorrow. So do it. So be it. 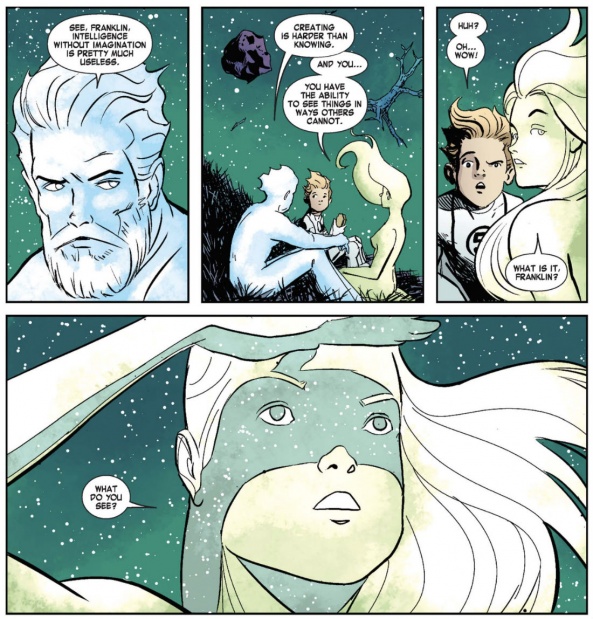 Thus here we are at the end. It’s been a wonderful ride, and I’m grateful to the people who commended this series to me. It was a wonderful romp of episodic family drama masked as moral and ethical multiversal quandaries steeped in the continuity of its time. I hope to binge it again one day.