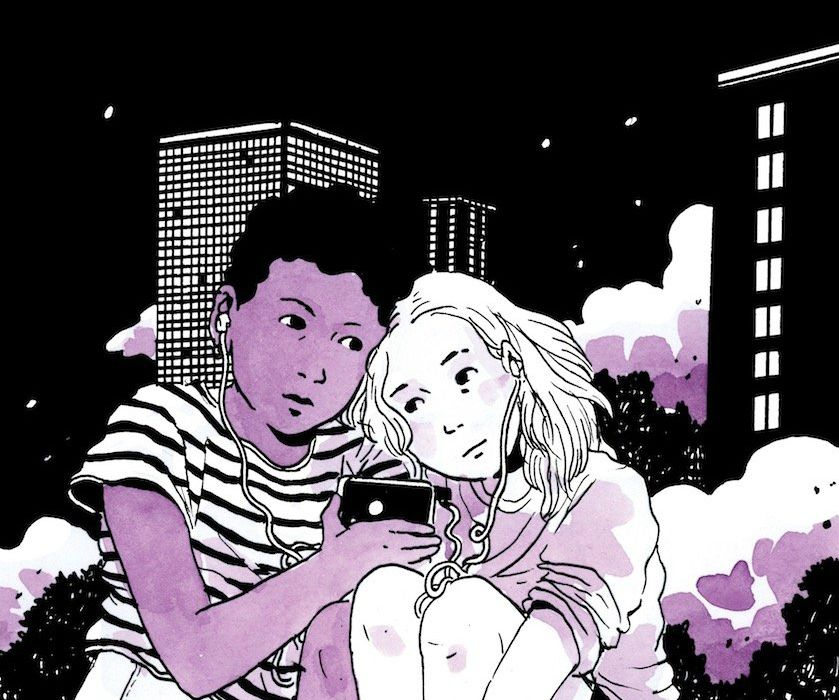 What makes a relationship so special? Is it the big moments, the grand romantic gestures that feel just like the movies? Or is it the dozens of small, inconsequential, almost mundane moments that stick in your memory when they’re gone? Perhaps it’s a mix of both, but in Tillie Walden’s short novel “I Love This Part,” we see a relationship bloom, flourish, and fade through a series of disparate yet intricately woven snapshots, depicting those small moments that have a big impact. 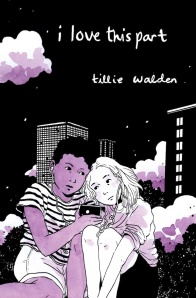 Written and Illustrated by Tillie Walden

Two girls in a small town in the USA kill time together as they try to get through their days at school. They watch videos, share earbuds as they play each other songs and exchange their stories. In the process, they form a deep connection and an unexpected relationship begins to develop. In her follow up to the critically acclaimed The End of Summer, Tillie Walden tells the story in the Eisner nominated I Love This part of a small love that can make you feel like the biggest thing around, and how it’s possible to find another person who understands you when you thought no one could.”

Following her debut, “The End of Summer,” Walden switches from the dark fantasy of that stunning work to something more intimate and vulnerable. “I Love This Part” is a 60-page tale that explores the blossoming relationship between two girls called Rae and Elizabeth, and, through a series of full-page panels, we are witness to interactions between the two that are sometimes minor (asking for answers to a test) to major (discussing whether they could ever tell anyone about their relationship). 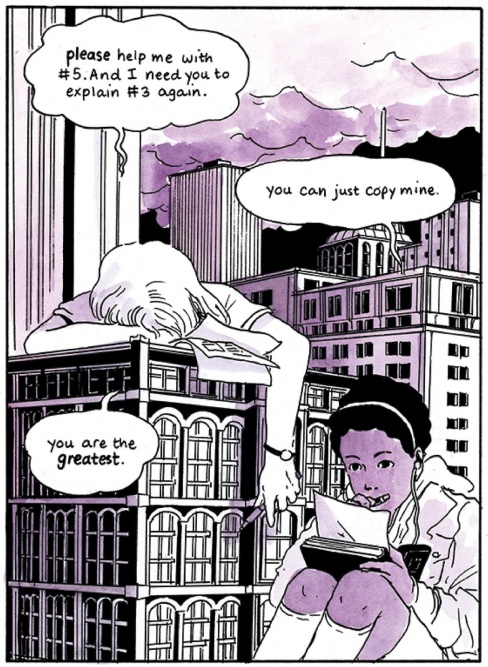 Walden’s work is always so evocative, so deeply engaging with a sort of quiet grace that you can’t help but be drawn in by. Here, you feel a genuine connection to these young women, even though you barely learn anything about them outside of their connection to one another. Partly this is down to just how real this all feels. By choosing to highlight those smaller moments in a relationship, Walden makes this more personal not just to her (in her autobiographical work “Spinning” we discover that Rae was the name of one of her first loves) but for us. We’ve all felt the pangs of first love, the overwhelmingly vulnerable mixed with the perfectly mundane making moments like sharing a blanket while watching a film on a laptop feel like the greatest moment of your life.

By maintaining the structure, Walden makes “I Love This Part” feel like a relationship remembered, rather than a story told. The series of isolated moments are narratively linear yet mere snapshots of a whole; interconnected snippets of the full story. We’re given everything we need in order to understand the bond these two share but, more than that, there’s a real sense these are the important parts, the parts most missed by the author now they’re gone. Like legs intertwined while sharing a bed, what may feel like a minor, inconsequential comfort becomes a lonely void when it’s gone. 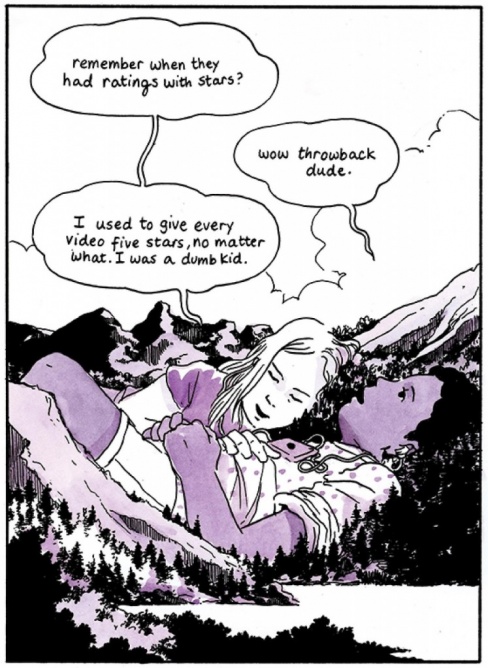 If many small panels on a page speed up your reading, Walden’s use of full-page panels throughout surely feels like a step towards the opposite. While the lack of dialogue and relatively short page-count feels like this could be a fast read, you find yourself lingering on every page, taking in the small moments as your mind wanders to times when you shared similar experiences with partners, or to just take in Walden’s gorgeously emotive artwork. There may not be many words on any given page, but there is so much said between these two characters with just a look or their body language. This is a contemplative, lyrical work that doesn’t need dialogue in order to progress the narrative told in the images, but when words are added they humanize and ground every moment in which they’re used.

Matching the larger panel size is the scale of the backgrounds. Often throughout the first half of the book, we see the two characters idling away a lazy afternoon in a manner very familiar to a lot of us; however, their forms dwarf the landscapes behind them. Sprawling on the top of an implausibly small building as if it’s the corner of a bed, or nestled between a mountain range, the canopy of a forest their pillows as they lean back listening to an iPod. The surrounding world is unimportant compared to their relationship, it’s small and irrelevant, and Walden matches this feeling with very literal visuals. An alternative take is their bond make them feel like giants, dwarfing everything around them and rendering these vast, open vistas insignificant when compared to their love. For those moments of greater vulnerability, however, they shrink back to a more realistic size, emulating the reality that threatens to burst their bubble, or the emotional size difference one feels when putting yourself out there. It’s no surprise that as the relationship falls apart in the latter half of the book, we see Rae and Elizabeth inhabiting their world at a more regular size, as their lives return to a version of normal without their intoxicating love.

“I Love This Part” is a vulnerable exploration of just how fragile love can be, especially first love, and especially first love between two people discovering their sexuality with each other. Examining a love that feels like the most natural thing within a world that still largely considers that love to be unnatural is a heartbreaking journey, and yet it’s one that millions of young people go through every day. Walden’s first-hand knowledge of that pain is what makes this book so deeply intimate and genuine.

At its core, “I Love This Part” is a collection, an accumulation of moments from that brief period of time when two people have each other, and nothing else matters. When sharing headphones is a treasured memory and the best part of your whole week, and discussing how to cheat at The Sims is as fondly recalled as saying “I Love You” for the first time. The pages within this book are all parts of a whole, parts Walden loves and remembers with a vivid passion that only first loves instill within you. For anyone that’s felt that familiar heartbreak of young love, where the wider world never seemed brighter or more insignificant, then this book will feel like home. It’s a beautifully realized, minimal masterpiece that manages to depict personal moments with a universality with which you can’t help but strike a sudden and long-lasting connection to. Read “I Love This Part,” and feel the heartbreak and elation of first love all over again.