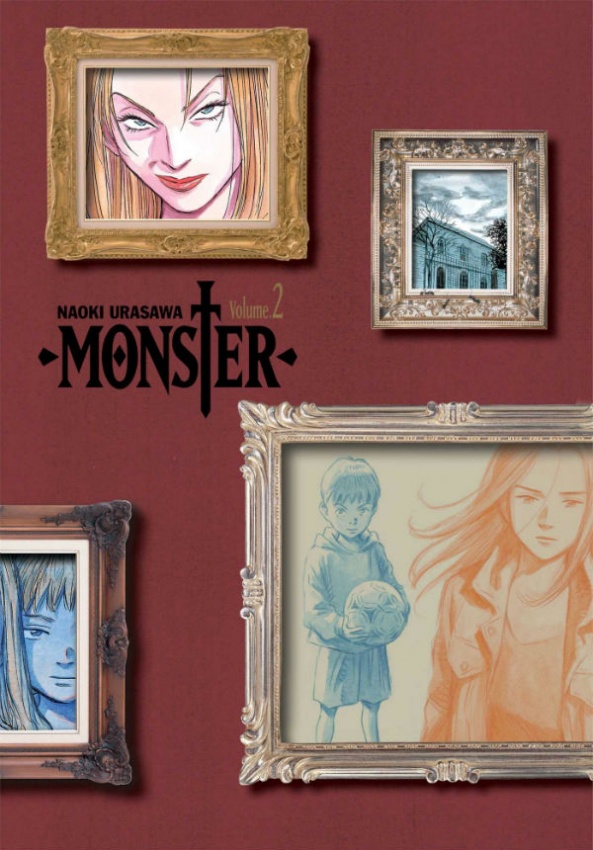 Who, ultimately, is the protagonist of this tale? Is it the ever suffering Dr. Tenma? Is it Anna, or is it Nina, the girl, now woman, hunting her own brother? Or is it Johan, the ever present shadow upon the world, never far from reach but always out of grasp? The question may seem to have a simple answer but, as this volume develops, the line between protagonist and supporting characters is blurred in order for the narrative to expand to the necessary scope.

Spoilers for Volumes 1 & 2 ahead

At first blush, it would seem that our dear Dr. Tenma is the protagonist of the story. He has been the focus of the most number of chapters, was the focal character for the entire first half of volume 1, and is the character with which all the action revolves around. Except. . .he isn’t. Johan is the lynchpin of the narrative, with Tenma reacting to his machinations and actions, chasing after him while he himself is being chased by the law for crimes, specifically murders, he did not commit. Although, it can be argued that Tenma is responsible for those crimes, even if he is not the perpetrator, and certainly this is how Tenma sees them, as his failures and shortcomings, a stain on his soul that threatens to color the whole thing red with the blood of others.

Then, does this make Johan the protagonist? Surely not. He isn’t even seen in Volume 2 and his actions are diametrically opposed to the frame of the series, used instead as the motivator for our main character(s). Which just leaves Anna. She was the focal character for a decent chunk of the second half of volume 1, when Tenma was absent from the narrative, albeit briefly, and her own quest to hunt Johan and finish the job she began all those years ago is just as central to the narrative as Tenma’s own hunt, the two paralleling each other throughout the volume. However, she too drops out of the narrative for the first half of the volume and her quest pivots around Johan’s actions as well.

Maybe, then, we can conclude that there is no protagonist, no main character with which to follow, and instead this is an ensemble piece, which it is, with Lunge and Eva and Deiter and, to a lesser extent, Otto, rounding out the larger cast as Tenma and Anna and Johan continue their dance. But, that, too, isn’t quite right. Johan is the spectre in the darkness, the prime antagonist, while Tenma is the prime protagonist, the initial mover and the person with which the narrative hyper focuses on. . .at first.

As I said earlier, after the midpoint of volume one, Dr. Tenma disappears from the narrative for a few chapters as we focus instead on Anna. By the end of volume 2, the number of chapters and pages where Tenma is the focus, or even the opener of a chapter, has dwindled. Chapters, 26-31 are split between Anna and Tenma while 24 & 25 are entirely focused on Lunge and Eva respectively. The volume itself opens on Otto, who happens to run into Tenma, and from there, Tenma shares more of his page counts with Otto, and then later Dieter. He flit in and out of the limelight, slowly receding further and further from the center, as others are placed there instead.

And the beauty of it all is, we need this for the narrative to remain fresh and expansive, for “Monster” is as much about the demons inside us all as it is about how to deal with ultimate evil, if there is even such a thing. With each new character, with each new focus, the catalog of experiences and mistakes and regrets and decisions grows, so that by the end, we will have amassed a great knowledge of what it means to be human, what it means to do good or bad or evil and all the ways they bleed into each other along the way. What it means to value the lives of others and why those who do not fail to understand what being human is.

Were Urasawa a lesser creator, the engagement with the narrative would drop every time Tenma, or Anna, disappears from the narrative. But instead, he keeps it interesting, and trains us early on to accept the changing focal characters so that when we cut to a chapter of Anna reminiscing with the hitman-turned-chef she stayed with while she learned to shoot a gun, the story flows and we are not wondering what Tenma and Dieter are up to, nor are we asking where the action is. This holds true, too, for when we cut away to Lunge or Eva, learning about their lives now and the loneliness their obsessions have begotten, and the way their personalities will drive them back towards Tenma.

Next week, Volume 3 (vol. 5 & 6 of the original release) and a discussion of the psychology of “Monster.”