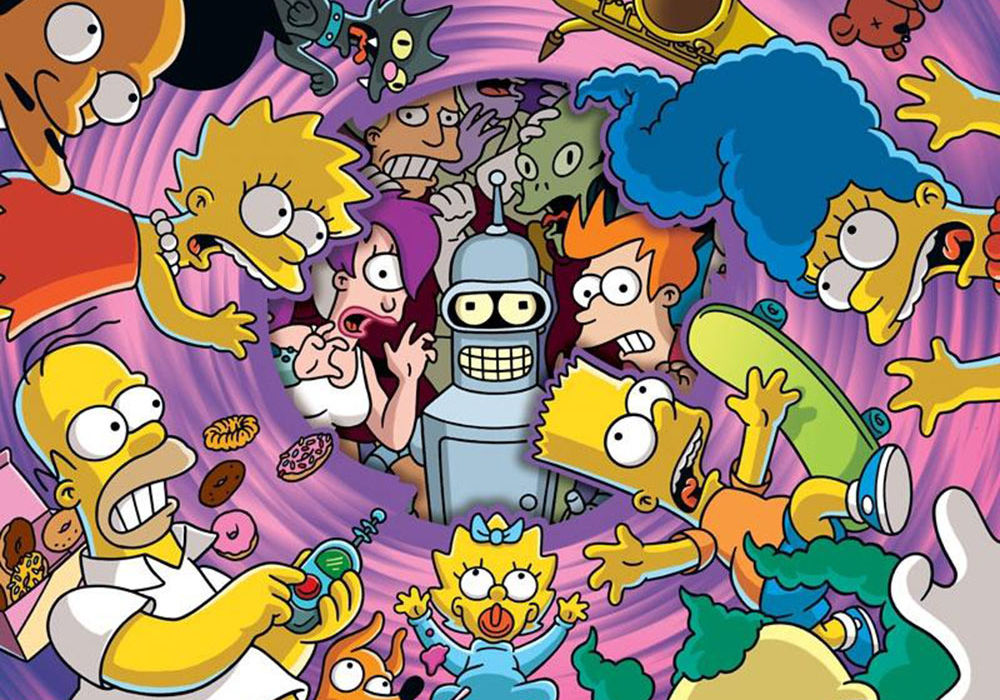 In the early days of the quarantine (or perhaps it was during the spring break staycation—who can remember?), I visited my comic book themed Amazon wish list, determined to pull the trigger on its longest-tenured resident. The dubious honor went to “The Simpsons Futurama Crossover Crisis,” languishing there for almost a decade. 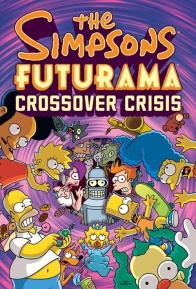 What would happen if the Planet Express crew and the citizens of New New York City in the 31st century met the Simpsons and the citizens of Springfield? Prepare yourself for a Simpsons saga filled with Futurama! A Futurama fable suffused with the Simpsons! This is the epic story that you’ve been waiting for, a story so big that it can only be told in a large format, slip-cased edition, complete with new material, supplemental stories, preliminary sketches, character designs, and a pin-up gallery featuring the talents of comics industry luminaries. Packaged with a bonus facsimile reprint of the Eisner Award-winning “Simpsons Comics” #1 from 1993.

For reasons that were one part an effort to support an independent comic shop during the impending economic crisis and one part a hedge against the tendency for books ordered on Amazon to arrive damaged due to insufficient care taken in packaging, I opted for placing an order with Lone Star Comics, better known by its mycomicshop.com url. The book shipped only days before the fine folks in Texas were forced to close their doors as a non-essential business. They’re set to re-open on April 20, and they’re deserving of a shameless plug as the book (along with a couple of other goodies) arrived exhibiting the care that fine purveyors of comics take in often antiquated notions of shipping and handling. The book was sans the reprint of Simpsons #1 that was available via a clever back cover pocket in the book’s initial printings, but I knew that going in. It was no matter, as the book is a stunner, a high water mark in comic book production value. Originally solicited by Bongo before subsequent reprints by Abrams Comic Arts (although the foreword by Groening suggests Abrams was a partner from the start) the hardcover fits snuggly in an ingeniously die cut slip case featuring the major characters from both franchises that is evocative of the clever early-season DVD packaging of The Simpsons. This edition is also oversized and features some nice variant cover galleries, pinups from some all-star comic talent, and sketch material along with interlude stories that have become de rigueur in nice hardcover editions.

Inside, readers are immediately reminded why Bongo Comics were so beloved while being simultaneously overlooked for so long. There’s a bit of a “if you’ve seen one, you’ve seen ‘em all” feeling you get from a Bongo comic at first glance, but they also elicit something akin to the nostalgic comfort of pouring over the Sunday funnies with a bowl full of sugary cereal. Does anything really approximate that ritual in the 21st Century? Don’t say “our phones.”

Bongo’s single issue offerings were never needle-moving best sellers but according to Heidi MacDonald’s thoughtful elegy on the day that Bongo’s final comic hit shelves in October of 2018, the collections often charted well outside of the direct market. Personally, I never missed their Free Comic Book Day issue, but I share a responsibility in Bongo’s demise after 25 years of publishing by not having Bongo books on a pull list. Add it to the list of things that you don’t appreciate until they’re gone. Luckily, there’s a trove of content to track down once back issue bins are again within reach. The “Radioactive Man: Radioactive Repository Volume 1” is already in my possession too thanks to an Amazon third-party seller. The reaction to receiving this volume was that immediate that I had to track down another Bongo hardcover edition before the widespread and inevitable quarantine-fueled buying frenzy. Yes, my decision-making skills are now officially compromised.

“Crossover Crisis” perfectly captures the look and feel of both franchises while also making the comic depictions unique to the medium. Is it as simple as slightly thicker lines? That’s likely just the shelter-at-home brain talking again. There’s a similarity here to Disney’s finest duck books where the comic version doesn’t feel like a pale imitation of its animated progenitor. It’s able to stand just fine on its own while also goosing the brand of humor into something a bit more, well, literary. There are puns, sight gags, and a pacing of jokes delivered with vintage Mad Magazine or Zucker, Abrahams, and Zucker Airplane! rat-tat-tat speed. Not everything elicits a laugh but the sheer relentless volume almost guarantees a healthy dose. There’s willingness to experiment on the page that the animated series simply doesn’t allow.

The narrative setup which is comprised of a two issue event and its sequel is classic Futurama inventiveness. The Simpsons exist as a historical pop-culture document in the next millennia, and of course Fry is a fan, and of course the Planet Express crew finds themselves teleported into the world of a Simpsons comic by Nibbler’s arch enemies, the Evil Brain Spawn, while the sequel flips the script, bringing the citizens of Springfield into New New York to make sure that all the bases are covered.

Groening credits Ian Boothby for coming up with an airtight premise for bringing Homer and Bender et al together, but it’s hard not to take his retelling of longtime Bongo editor Bill Morrison’s story pitch as a little tongue-in-cheek which doesn’t take anything away from Boothby’s script or James Lloyd’s assured pencils throughout the book. What’s there to say other than that this handsome collection rises to Bongo’s consistently high standards? Again, it almost feels like a victim of its own excellence. Surely there could have been ways to make Futurama/The Simpsons crossovers annual events, but it’s probably best that this is the extent of it. At their cores, they traffic in different brands of humor. Tonally The Simpsons doesn’t move in the kind of dark satire that Futurama wallows in.

It might be heresy to say that even in the comparison of ratings-challenged Futurama to The Simpsons halcyon seasons that I find Futurama to be the superior product, which is not a knock on The Simpsons but rather a commendation of the characterizations of Futurama’s band of misfits, wild sci-fi plotting, and semi-dystopian premise that resonates more than The Simpsons ageless sitcom tropes. With “Crossover Crisis” it’s fun to see everyone can coexist for a bit in comic form, but it’s like anything sweet: too much will give you a tummy ache.

Author’s note: If you’re looking for the television crossover, “Simpsorama” is the sixth episode of season 26 of The Simpsons. Fire up your Disney+ accounts and grab a beer from the fridge for that one.