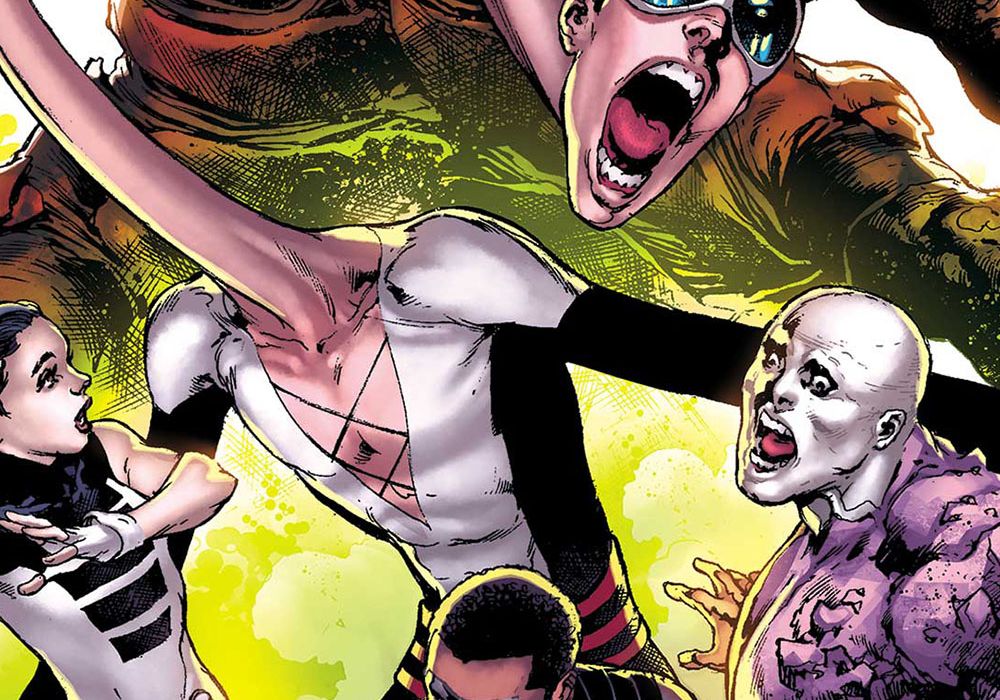 After the events of “Dark Nights: Metal” and a short trip back to the Dark Multiverse, it looks like these four heroes might be stuck together for awhile, whether they want to be or not. 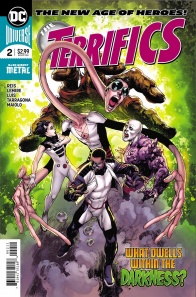 ‘MEET THE TERRIFICS’ part two! Tom Strong has disappeared, and the Terrifics have found his emergency beacon! But to save anyone else, Mr. Terrific, Metamorpho, Phantom Girl and Plastic Man must first save themselves from the Dark Multiverse they’re trapped within-not to mention the gigantic alien monster they’ve been standing on this whole time!

“The Terrifics” #2 continues to riff on Marvel’s First Family dynamic, and we should all just get used to that. Analogs aside, Jeff Lemire’s script hums succinctly through another fairly straightforward setup adventure. Where it sings is in the characterizations developed through the bickering between Plastic Man and Metamorpho, the tragedy of Phantom Girl’s origin, and Mr. Terrific’s somewhat abrasive ad hoc leadership. These are characters who are used to being alone or alienated. Fate has thrown them together, and we’re not sure yet if anything can tear them asunder. The twist is not that they have an early and easy familial affinity for one another. By the end of the issue, events transpire that show, let’s just say, it’s in everyone’s best interest they work together.

Jeff Lemire, otherwise known as one of the hardest working men in comics, has gotten so efficient at what he does that it’s easy to take him for granted. Sometimes someone can be a victim of their own success. Lemire’s scripting on “The Terrifics” doesn’t reinvent the wheel and won’t challenge many readers (as much as it might send them scurrying to get current on DC’s latest event mini series for backstory), but what Lemire does excellently, beyond the characterizations, is very efficiently setup a premise both intriguing and accommodating for serialized storytelling. As was pointed out in our review of issue one, Lemire gives us more than we’ve come to expect in a single issue. This issue delivers another fun and freestanding adventure that fits into this larger introductory arc.

If the second issue has a failing, it’s in the rapid shuffling aside of the cliffhanger Tom Strong reveal from the premier issue. Evidently it’s up to the ad hoc foursome to save the universe, but there’s no inkling how it might be in danger and what this team can do about it. And before the projection of Strong can reveal anything else to our heroes and to readers, we are presented with an origin story for Phantom Girl, possibly connected somehow to her namesake in the Legion of Super-Heroes. The castaway’s backstory is so nicely rendered and tragic that readers may forget that the universe needs saving. Mr. Terrific’s idea to remove the mystery device’s antenna for further study seemed odd as well, like taking the antenna off a car to find out how the engine works. But Mr. Terrific is a smart dude. Readers should be assured that he knows best, I suppose, and Lemire has earned the benefit of the doubt when it comes to storytelling chops.

After two issues, mysteries abound. For instance, why Ivan Reis required a fill-in artist for the final five pages. Beyond some differences in facial renderings (particularly with Phantom Girl), the transition is relatively seamless, but it does seem odd that this was needed so early in the series. The artwork from Reis, Luís, and Maiolo is very much in the predominant DC house style with perhaps somewhat less gloss and a bit more whimsy. Putting Plastic Man in your book will do that. It’s as if he forces everyone to get on his level, to be a bit more playful with body language and expression. It’s still mainstream super hero rendering, but there is a softer elegance to the line that evoked some of artwork coming out of Valiant these days. Every panel is filled to the brim, matching Lemire’s packed script. Things are happening quickly, and there’s an urgency to the art that gives the few quiet moments a bit more relevance and room for Lemire’s character development beats. The artistic team is really firing on all cylinders here, and hopefully Lemire’s scripts will keep giving them big and gonzo set pieces to work with, like a Dark Multiverse zombie giant who’s now short a few fingertips.

Ultimately, “The Terrifics” feels like a bit of a throwback to a simpler time in comics, when heroism was the default reaction to a galaxy-threatening crisis. To quote Thor in his latest cinematic iteration: “That’s what heroes do.” For this team, their early mantra may be more like: “This is what heroes do, I guess.” What will be interesting to see as the series progresses is how these loners start to rely on each other once the circumstances necessitating their unity have been overcome.