Assassination attempts are a drop in the bucket compared to war crimes, we witness loss the likes of which has only been visited upon the Markab, and the war of light and dark begins to step out from the hidden corners of space. Welcome my friends. This is the story of the last of the Babylon stations. The year is 2259. The name of the place is Babylon 5.

1. All Quiet on the Western Front

When an episode titled “The Long, Twilight Struggle” opens with notorious assassin and plotter Refa and his semi-reluctant, conflicted accomplice Londo having a chat in the Emperor’s throne room, with Refa sitting on the throne as if it were his, you know this is not going to be a particularly fun episode. What I did not expect to encounter was Refa proposing, and then executing a plan that involved literal, banned, war crime-level weapons of mass destruction. . .and that Londo goes along with it! You feel for Londo but only because we have seen him fall. We know there was once the possibility of redemption but now, we know who he has thrown his lot in with.

Londo’s arc is fantastic because his fall from grace is executed on the screen through compromises that, at the time seemed recoverable from and entirely in character. This hatred was always in him but there was the hope that with time, with effort, and with enough of his compassion left, he may turn from his hate and be a force for change. But he gave in. Again and again, he let his desire for hate destroy his ability for love and now he must live with the actions he has helped bring about.

You feel for him, for the bit that remains trapped in his hardened heart; that yearns to take it all back, to realize the mistakes he’s made and attone, repent, and change. But Londo jettisons all that this week onto the surface of the Narn homeworld, earning the look of contempt and disappointment from Garibaldi.

How are monsters formed from regular folks? Simple, they let other, greater monsters tell them that what is good is what is monstrous and that it is good to release the monster.

Dr. Franklin’s ability to network and organize is mind-blowing. Think about it. How many different underground organizations has he been a part of and how many secretive messages has he passed along? It’s commendable and, even though Sheridan and his new command of the Rangers will get all the focus, Franklin is showing himself to be the real hero aboard B5. I love these kinds of character moments that recur and build in the show based on the motivations of each character.

Franklin lives his life by the words “Do No Harm” and, extending that, he actively tries to avoid more harm, even going so far as to relay information to one side of a war he’s technically supposed to be neutral in, in the hopes of saving the lives of the Narn homeworld’s civilians. I tip my hat to you Doctor Franklin, and to Richard Biggs for his always wonderful performances.

3. The Things We Carried

You know who I do feel bad for? G’Kar. This episode wails on him in ways not seen since the mid-season episode “The Coming of Shadows.” First, he meets with his uncle and learns of a last, desperate attack against the Centauri. It’s the first he’s heard that the war is not going well, which is unsurprising considering most governments want public opinion to be for a war instead of against or in despair. Next, he hears Franklin’s message about the strange urgency of the Centauri interrogators and their sloppy retreat. Then he learns of his inability to stop the attack on homeworld, the surrender of the Ka’ri, and the destruction of the entire fleet containing his Uncle.

Finally, he is stripped of his ambassadorship and is forced to ask for Sanctuary on B5 so as to avoid being arrested and tried in a kangaroo court by the new Centauri government.

He is defeated and silent in his final moments and it breaks your heart. In fact, that whole final scene in the council chambers is nerve-wracking and terrifying. Peter Jurasik channels the scariest version of Londo he can for this scene, putting aside all the personal fears and doubts for a performance of might that leaves everyone shaken and angry. The old Londo is gone and in his place stands someone much worse.

Compare this to episode one, where G’Kar is positioned as the trickster, the huckster, and the representative of a disingenuous government. That positioning is no longer true, perhaps it never was, or at least not in full. Now, instead, we see G’Kar, beaten by a force willing to destroy all they see in their quest for power and the man who upholds it all, demanding that G’Kar be punished, even killed, for nothing more than being alive. Where he goes from here, I guess we’ll find out.

OK, it’s been a bit of a dour few episodes here so, on a somewhat less dour note, Draal is back! You remember Draal? He went into the machine on the planet? Said he’d come back and let people down when the time was right? Well, he’s got a new actor now and it seems that the time is right so he force ghost’s his way onto the station and gets Sheridan and Delenn to fly on down. In the midst of all the really heavy Narn/Centauri war stuff, it’s a surprise that the other major plot thread, the coming of the shadows, feels almost light in comparison. Garibaldi gets some great lines in and while the banter between Sheridan and Delenn does lean into the slightly forced, aw shucks style of talking, it’s also quite enjoyable.

Draal is great and his new actor, John Schuck brings a lot of energy to the role. We also get a pretty major info dump and a kick in the pants to really get this plot line rolling. It feels a bit like we needed it here to reorient Sheridan to the events of season one though. In fact, that’s probably my biggest gripe with the season as a whole. We have to spend a lot of time reacclimating Sheridan, who is always incredulous for a little bit, to the more strange bits of season one and while it’s done well, it can feel a bit repetitious for us. There’s no getting around it though so, hopefully now that most of the revelations have been re-revealed, we can start spending exposition time on new stuff rather than the old. 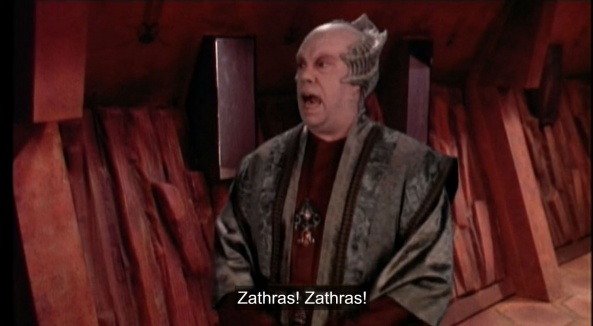 I don’t have anything else to say on this.

That about does it for now. Join me again in a week for the penultimate episode of season two, the Narn resistance, and there’s something about an Inquisitor on the station that wraps humans and aliens in two million, five hundred thousand tons of spinning metal . . . all alone in the night.

G’Kar: “No dictator, no invader can hold an imprisoned population by force of arms forever.
There is no greater power in the universe than the need for freedom. Against that power, governments and tyrants and armies cannot stand. The Centauri learned this lesson once. We will teach it to them again. Though it may take a thousand years, we will be free.”

The term Orwellian is often misused but it is very appropriate this week, the first ones finally become important, and Ivanova finds out what it’s like to have a bad trip.

An old friend returns to the show, we learn a bit more about the Minbari religion, and we’re asked to consider when justice ends and revenge begins.

Five Thoughts on Babylon 5‘s “A Day in the Strife”

A strange probe pretends the crew is on a quiz show, G’Kar is put in a difficult position, and Dr. Franklin may be run far more ragged than we were led to believe.