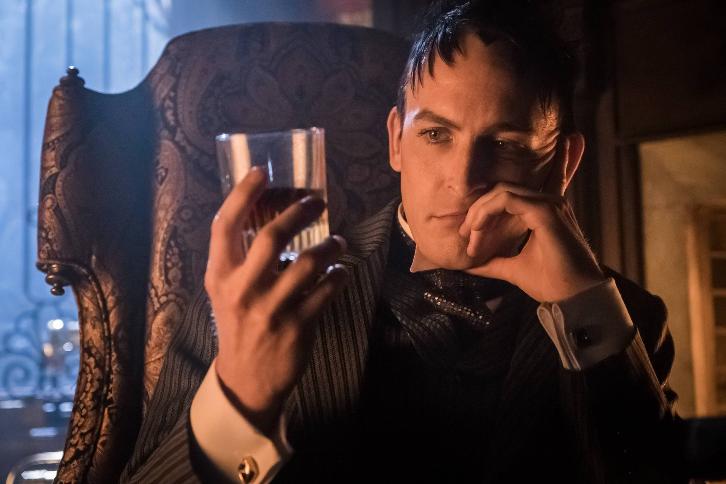 Welcome back to our recap of Fox’s hit TV series, Gotham. As the one person who watches this show, it’s been decided that I should be the one to chronicle its existence so history could never forget. Kind of like The Giver, I think. As always, I refuse to look up anything that happened in the previous two seasons of Gotham because I only started watching two weeks ago. Also, look out for spoilers from here on out.

Last time on Gotham, The Mad Hatter’s been arrested which means we hopefully get a couple weeks where not everything is about him, Captain Barnes accidentally swallowed some of a dead girl’s blood (when in Gotham, baby!) and it’s making him go all Hulky, and The Riddler is dating a girl who looks just like the ex-girlfriend he murdered. Riddler’s fine with this and The Penguin is standing five fight away from him holding a boom box over his head blasting “In Your Eyes”. 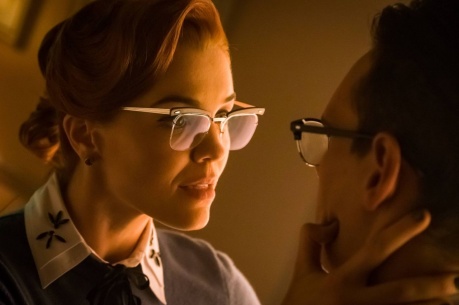 This episode focuses a lot on GCPD Captain Nathaniel Barnes which makes sense because he’s played by Michael Chiklis and how we have not had a whole Michael Chiklis episode yet? Ever since he accidentally drank a girl’s blood, Barnes has been having small berserker moments where his eyes grow all veiny and he wants to kill criminals. While parking his car, Barnes stumbles upon a “cleaner” who has a warehouse where he disposes dead bodies by chopping them up and stuffing them into barrels full of acid. That’s Gotham for you. Barnes goes berserk, rips the guy’s head off, and calmly goes back to the precinct to eat a donut or something. Eventually he asks Mad Hatter what the deal is with his sister’s blood and Hatter’s just like “Fiddle dee dee! One and one makes three!” I’m thrilled that’s his only part in this episode.

Barnes eventually does some lone wolf investigating of his own and finds out the cleaner’s client was a “Dr. Symon” which made my Grant Morrison fanboy skeleton jump out of its skin until I found out it was spelled with a Y. Barnes finds Symon in his office about to cut a girl’s face off and he beats the crap out of him and threatens to kill the doctor before arresting him. While all of this is going on, the girl strapped down on the operating table is just like “this isn’t how due process works at all lol”.

Over at the rest of the GCPD, no one’s really doing anything because Mad Hatter’s gone and we temporarily don’t have a bad guy to rally around. Well, we’re going to have Michael Chiklis starting next week but the GCPD has to spend an hour pretending they didn’t see their boss walk back into his office covered in blood. Lee Tompkins is having an engagement party and maybe it’s because I’m a millennial whose relationship experience stops at “Vine and chill” but didn’t she get engaged months ago? Do you just host parties when you’re an adult and say it’s for whatever you want? I have rent out an Applebee’s next week and say it’s for my wake would anyone be able to stop me? Jim Gordon’s a little bummed out because he wasn’t invited to his ex’s party but Harvey Bullock is just like “Haven’t you watched this show? It’s a fancy dinner event, it’s going to be attacked by a bad guy like two hours ago. We’ll be there.” 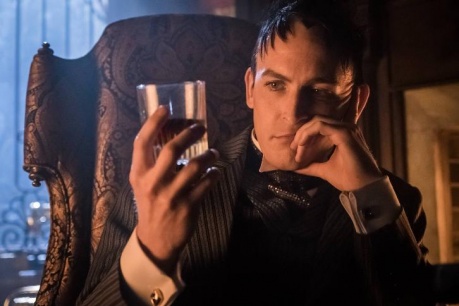 Gotham‘s most interesting story took a few weird twists and turn this week when Nygma sat with new girlfriend Isabella (who once again still looks like the ex-girlfriend he choked to death) for breakfast. Ed freaks out because Isabella puts on glasses and suddenly looks even more like the ex-girlfriend he choked to death. Nygma freaks out, runs off, and has Penguin break up with Isabella for him which Cobblepot is all too happy to do. Because he apparently doesn’t have any duties as mayor. Dude got elected a month ago and has done nothing since but pine after his top surrogate. Maybe that’s what would happen if Trump wins tonight. Not the apocalyptic scenario most of us imagine, but four years of him making googly eyes while glancing at Paul Ryan-senpai.

Isabella’s not content to leave “You look like a woman he murdered and he really doesn’t want to freak out and murder you” as a legit reason for ending a relationship that started three weeks ago because she has to be an undead assassin or something. I once broke up with a girl because she didn’t clean up after her pet, you can comfortably leave a relationship when “murder” is at the top of your boyfriend’s report card. Instead, Isabella invites Nygma to her apartment for the kinkiest scene in television history. Isabella dresses up as Riddler’s dead ex-girlfrined and asks him to choke her. The Penguin blew up a zombie assassin with a rocket launcher last season and this is the craziest shit I will ever see Gotham pull. What the heck.

What drives me crazy about this, besides my faux kink shaming for whatever Isabella and Riddler are into, is how they has to be up to something, right? What’s the point of Riddler having a reminder of the life he took if we’re just going to be like “It’s fine, he found a manic pixie dream girl who’s okay with how he murdered his first girlfriend and in fact wants to dress up as her during the sexy times.” At least this isn’t going to last for twenty more minutes.

Back at the network mandated fancy party, Carmine Falcone sits down to Barnes. Barnes tells Falcone he’s a corrupt man who should be arrested and Falcone is just like “no you” which causes Barnes to inwardly reflect and say “yes me”. Barnes gets up and sees that Symon is at the party after being released under orders from higher ups in Gotham. Not sure who those higher ups were since the Penguin’s too busy living a Carly Rae Jepsen song to be corrupt but okay. Barnes follows Symon into the bathroom where Symon tells Barnes he can’t kill him since that would be against the law. This causes Barnes to straight up turn into Judge Dredd. I’m not exaggerating. Barnes screams that he is the law, says that he’s the judge, jury, and executioner then throws Symon through a wall and onto he street below. I hope from now on, Barnes’s berserker mode turns the lower half of his face into Karl Urban’s.

Jim Gordon leaves the party after Lee’s fiancee tries to be all alpha or whatever on him. While walking down the street he sees Symon’s body which crash landed on a truck. Symon, with his dying breath, tells Gordon that Barnes did this to him. That deeply upsets Gordon because he could’ve sworn Bucky died back in World War II.

5. Give Penguin a Brake

Fresh after having had sex with a woman who asked him to choke her while dressed up as the other woman he choked to death, Nygma shows up to Penguin’s to tell him that everything’s cool. Penguin, who cannot believe that this plotline is still happening, half-heartedly hugs Riddler until he goes away. Then one of Penguin’s goons waltzes in with some pliers and tells Penguin it’s all settled, cutting to Isabella on her way to a librarian’s conference. She tries to stop before a railroad crossing but, surprise, the brakes are cut. Isabella’s car runs right into the train and Gotham‘s now got a two on its scorecard this season for killing women so other guys could be upset about it.

I bet Riddler’s going to be real choked up next week.