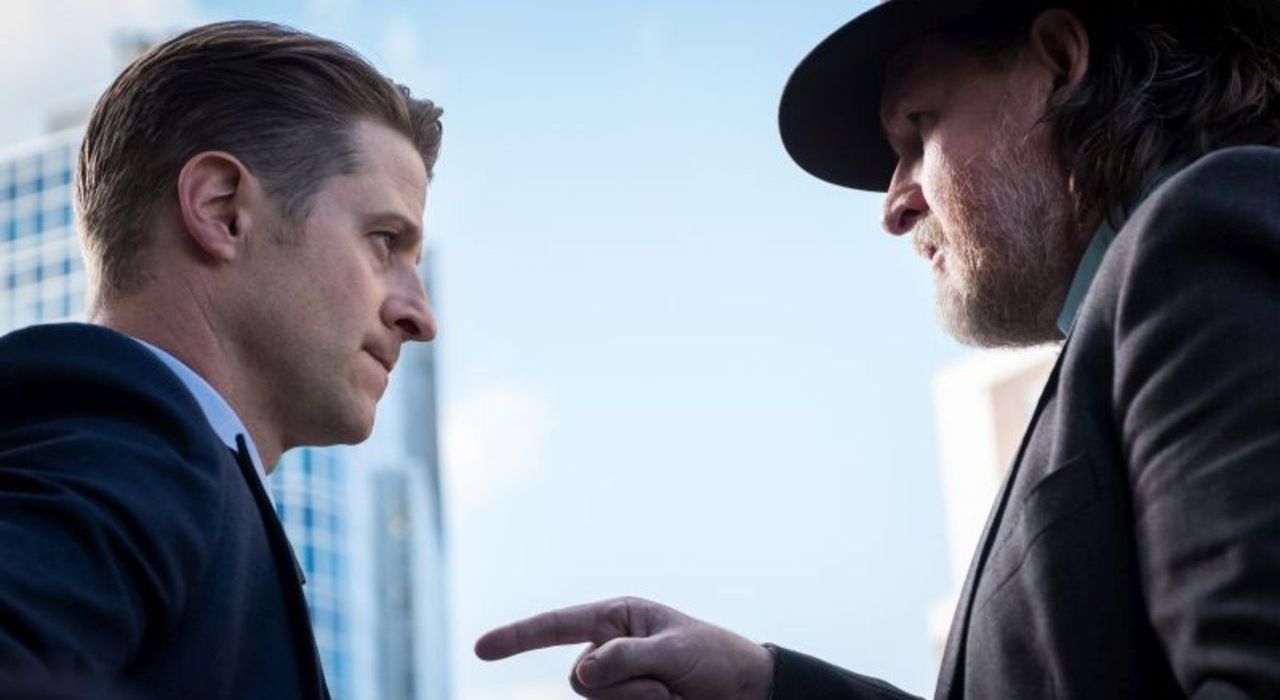 This isn’t the first time I’ve watched Gotham, but I’ve not seen an episode since season one. I’m pretty sure I watched the first three episodes, (maybe four?) but then I dropped off pretty hard. I think it’s safe to say that Gotham was not at all what people expected or perhaps even wanted it to be when it first started, but since then it definitely seems to have found its own fan base and its own groove. It doesn’t hurt that that groove seems to be “buck wild procedural with unexpected Batman references.” While I’m certain this isn’t the most bonkers episode ever made, it certainly had its moments.

1. No Pygs were harmed in the making of this episode

Right off the bat, I’m stoked to see Professor Pyg play what appears to be the role of the Big Bad for this season. He’s a relatively new addition to the Batman mythos but anytime a Grant Morrison creation is used I’m happy. In the first of what will be many absurd moments, Pyg has 44 pig’s heads delivered to the GCPD (one for every cop except Jim Gordon, for reasons that will become clear) but that’s not the craziest part: it’s the fact that the UPS guys just stroll into the center of the Police Department with 44 bloody, apparently smelly boxes and not one of them think to question what might be inside?! Surely you can’t even brandish a pen wrong in a Police Department without someone pulling a gun on you.

Either way, it appears that Pyg is targeting every cop but Gordon, and proceeds to prove his point by capturing three of them, leading the GCPD to partner up with Penguin and his goons (under the Pax Penguina, which I can only assume has been established beforehand) to find Pyg before he kills his next victims. Gordon’s against this, obviously, but for me, it felt like a fun way to delve into the corruption that’s systemic in Gotham, as well as make the city’s decline feel more natural; death by degrees.

The “B” plot for this episode (B for Bruce, get it?) is watching another decline, of sorts, as its set up in the “previously on” that lil Bruce killed Ra’s Al Ghoul seemingly? Which is annoying because it seems that Ra’s was played by Alexander Siddig who I love, which means I missed seeing my boy Julian Bashir. Either way, that’s taking its toll on Bruce, who spends this episode trying to control his anger issues as he ditches a fundraiser to go to a rave with Tommy Elliott.

Oh, I should mention, Tommy Elliot is in Gotham – as in Hush? If you watch the show, you probably already know this but that made me laugh out loud for some reason. Bruce’s arc is probably the most entertaining in the whole episode, as he confronts and defeats a bully in the most Bruce Wayne way possible: by buying the club they’re all trying to get into, making sure everyone gets in except the bully, then making out with the girl the bully had his eye on. There’s a montage near the end of the episode that seems to imply Bruce is going off the deep end hard with all of this drinking and partying, but honestly? Two things: I’m pretty sure that partying and drinking and making out with girls is a way healthier way of handling grief than, oh I don’t know, dressing as a bat and punching the mentally unwell? Secondly: that move was straight baller, and no one is going to convince me otherwise.

3. Catwoman’s storyline cost me three of my nine lives in boredom

Maybe boredom is a bit dramatic, but the “C” plot of this episode (“C” for Cat, obviously) is the only part of this episode that suffers because I’ve not watched anything previously. Without the context of who these people around her are (I’m pretty sure that the blond leader who’s channeling Michelle Pfeiffer used to be Jim Gordon’s wife? They call her Barbara so maybe) or without knowing why they’re trying to steal from a biker gang led to me finding myself pretty uninterested in their scenes.

Conversely, I know next to nothing about Penguin’s situation either, but his scene at home with who I think is Falcone’s daughter was delightful. Robin Taylor steals every scene he’s in, which I don’t think is new information to anyone, but here he chews the scenery with such vigor that it’s a joy to watch. There’s a later scene too outside the abandoned courthouse where the police have tracked Pyg down where he flails around, throwing everything he has into every word. Suffice to say he’s my fave.

4. Headhunter is a treat

I feel like there were a few moments in this episode where I took completely the wrong message away. The first was earlier, with Bruce’s “decline” (heavy quotes there; still think he’s being a typical teenager), there’s one coming up with Professor Pyg, and then there’s Headhunter, who you’re meant to hate but I love. Introduced in this episode (only to be killed off near the end), Penguin’s latest bodyguard has the swagger of Han Solo and the confidence of, well, Han Solo. Basically, he’s your stereotypical loveable rogue, except I’m pretty sure he’s a mass murderer.

Kyle Vincent Terry played Headhunter as the kind of guy you either want to be or want to punch in the face, maybe both at the same time. His gimmick is that he carries two guns because he always shoots twice: the first shot always hits, but the second? Well, that’s his signature. This bravado personifies everything that’s wrong with the police joining forces with Penguin, leading to a particularly vicious confrontation with Jim Gordon out on the street. His murder at the hands of Penguin was genuinely shocking because I had so much faith that Headhunter would be an excellent recurring character, but alas it was not meant to be.

I don’t know whether this is typical for Gotham or not, but there were multiple times where the show felt like it was borrowing heavily from both Tim Burton’s movies (at least aesthetically) and from Christopher Nolan’s Dark Knight trilogy. It’s unsurprising that they would do this, but I guess I wasn’t expecting it to be so blatant. Not only does Barbara Kean (I looked her up) remind me of Pfeiffer’s Selina Kyle portrayal, but Bruce’s baller move in the club was lifted straight from The Dark Knight.

More than that though, Professor Pyg has more than just a touch of Bane about him, and the big twist of the episode (which you could sense a mile away, but was still cool) felt very much like a Nolan move, maybe even with a little bit of Hannibal Lecter thrown in for good measure. Here’s where I once again took the wrong message away, because you’re meant to think that Pyg is this deranged villain, but really how is he any different than what Batman will eventually become? Sure, his methods are a little deadlier, but at his core, he’s a character fighting against the corruption in Gotham by dressing as an animal and carrying out vigilante justice. That’s why, it’s revealed, he spared Jim Gordon: Gordon is “one of the good ones,” and Pyg is only punishing the bad. Sound familiar?

Overall, I went into this episode with one question: would it make me want to watch more. Surprisingly the answer is a definite yes. While the subplots may flounder a bit, using Pyg as a tool to shine a light on (and probably ultimately lead to more of) the corruption in Gotham City is pretty inspired, and after a bit of side reading it appears that this half of season four is taking its inspiration from “Batman: The Long Halloween.” I can only imagine it’s a spiritual inspiration rather than a direct narrative lift, but if this episode is anything to go by, seeing the police and Penguin chase down Professor Pyg is an entertaining story I want to see unfold.