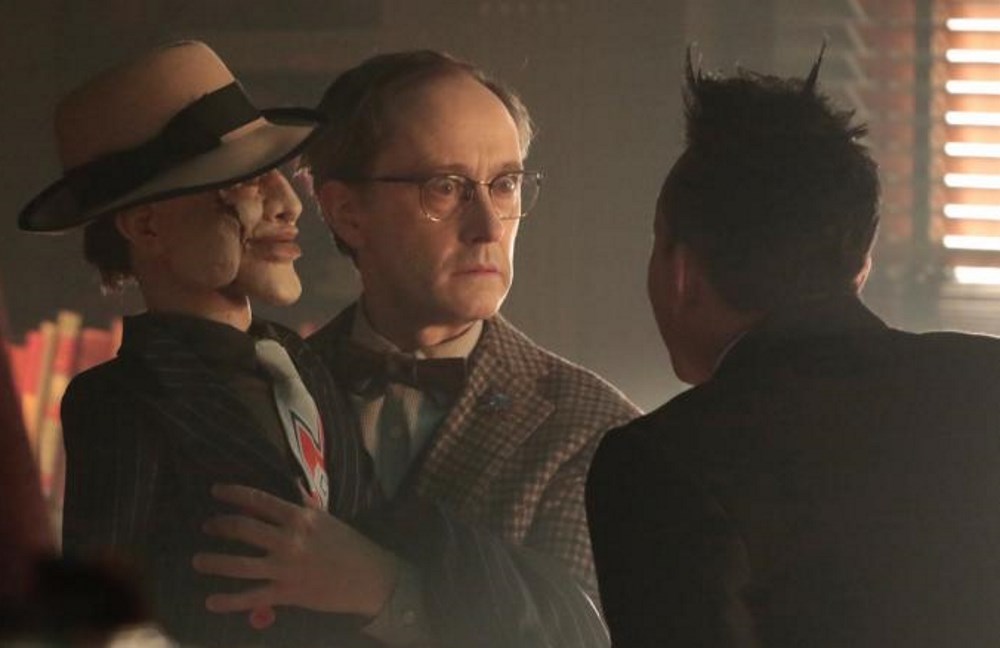 I’m pretty sure I watched the pilot for Gotham when it premiered. I also think I saw most of an episode about Azrael. A dude’s hand got chopped off in that one. And Paul Reubens was in it? Did I dream that? I definitely watched an episode about Professor Pyg. Solomon Grundy was a wrestler in that one. That would make this the fourth episode I’ve ever seen of Gotham. Let’s see what this week has in store for me.

I thought this was at one point supposed to be a grounded “real world” version of “Batman.” But now they are doing a version of ‘No Man’s Land’ and they’ve used CGI to blow up the Brooklyn Bridge and fill the river with CGI Joker goo. So I guess it’s some combination of real world, Riverdale levels of camp, and a prequel world where the entire story of Batman happens before Bruce Wayne turns 18.

This show is insane and I don’t understand the choices it makes.

Like, why use such prominent New York landmarks? I know they film it in New York. When I lived in Harlem they used to film (often) in the church parking lot across from my apartment. But the Brooklyn Bridge is not in Gotham City; it’s one of the most famous bridges in the world! And what is up with this music? There are horror scare strings for everything, up to and including the cops being shown a body. Can you imagine if Law and Order did horror movie music every time they found a body? Briscoe would never get anything done.

You know, on the surface I really love the idea of a show about teen Batman. It’s an idea that exists somewhere between “James Bond Jr.” and “Muppet Babies” and I dig it. They sort of get it right in this. Bruce Wayne and Alfred working together to solve crimes before bedtime. Bruce has the dumbest spiky hair and the kind of black leather trench coat that could only have been selected by a real team and not a professional costume team.

But in practice it’s sort of a drag. Bruce and Alfred are after a sewer cannibal man. All signs point to it being Killer Croc, but it ends up just being a homeless dude in flannel with big teeth. He got mutated by proximity to the lime green Joker river. Now, Croc is one of the more physically imposing Batman villains, but this show doesn’t have an action or stunt budget, so after a lot of shaky cam we cut back to a hospital where Alfred describes all of his feelings to teen Bruce in a raspy British monologue.

“When did you get so smart?” cool raspy Alfred asks. “I had a pretty good teacher,” Bruce replies. This dialogue is the kind of garbage that I came to Gotham to see! This is what I’m taking about!

I guess I can accept that none of the character in Gotham have ever watched TV. All the sets are so grimy that copper wiring probably all rusts away in minutes. But I expect that the writers of this TV show have watched TV, and that makes some of their creative choices a bit inexplicable.

The bad guy in this episode turns out to be Jane Doe, a deep cut comic book villain with shapeshifting powers. And the powers look pretty good actually! But even a world where they’ve evidently encountered a shapeshifter (they reference Clayface), Harvey, Gordon and the gang are friggin’ idiots. “The killer is obviously a man,” Bullock insists after they accidentally tear Doe’s face off. Then he continues on like “And also a shape shifter. With strong feelings about gender normativity.” Dude can accept a real life Animorph, but not someone who would switch sex to do murder.

And we go through every shapeshifter cliché in the book. We lock the place down. She turns into Harvey to kill Harvey’s friend, who never sees it coming. She turns into Gordon’s ex, runs into the room, and claims she was attacked by the shapeshifter in the form of Gordon’s ex. She demands they all immediately shoot Gordon’s real ex. Gordon asks her a question only the real her could answer. (“Where did we first meet?” Lame!)

We finally end with the confrontation where Harvey asks Jane to take off her mask, but Jane doesn’t want to because she’s imagining her inner scars to be on her face. Her mask comes off and she- gasp!- looks perfectly normal. Oh and then she pulls a gun on Harvey so Harvey just stone cold shoots her dead. This is all just textbook TV shapeshifter episode, but with a really weird murder at the end that no one ever feels compelled to talk about. I guess this sort of thing happens a lot in Gotham.

If there’s one thing Gotham has in excess it’s twitchy white boyz™. A lot of this episode is taken up by Penguin, Riddler, and a dude named Ben who ends up being Ventriloquist. I changed my opinions on Ventriloquist every other sentence he spoke. On the one hand, he was really awful in practice. Andrew Sellon seems to be an actual ventriloquist, and that means not pronouncing the letter ‘B’ and everything. It’s really goofy. The way he holds a gun in the dummy’s hands was cringeworthy. But… maybe that’s what Ventriloquist and Scarface would look like in the real world? But is that what this show is about?

We should also address these three men as actors. Sellon had to do one of the craziest things I’ve ever seen on television and he went for it. Cory Michael Smith on the other hand… well he went for something, but Nygma is a character who doesn’t make sense. That would be par for the course, but then you’ve got Robin Lord Taylor as Penguin, and here’s a thought: that dude is amazing. I cannot believe how deeply I bought into his shifting and inexplicable motivations. Does he care for his friends? Himself? Is he a genius? An idiot? Is he slippery? Clumsy? Every time the script calls for Penguin to be something different, Taylor makes it part of a coherent character.

Sometimes the best kind of acting is the most acting.

5. How do you feel about submarines?

I’m sure someone who’s watched more than 4 episodes knows why Penguin and Riddler need to build a goddamn submarine… but I don’t! Every time they mentioned it was a spit take for me. And they played it so straight, like obvious a submarine is the only way to escape Gotham, and obviously we need to build it by hand.

Most of the action in this story was just the three skinny little pale men standing a few meters apart arguing, but it ends when Penguin gets the gun and shoots Scarface’s little puppet head off. That frees Arnold (Arthur? Ben?) from its control. Only then, Nygma blows off the real human dude’s head, which even I need to admit is a baller move. Their story ends with a profession of friendship between the two psychos and after feeling jerked around by this mixed quality show, I was sucked right back in. It almost felt like the end of a really macabre anime, everyone standing around and laughing at a joke that doesn’t quite land.

But how do I feel about submarines? Bad man, I feel bad about them.