It’s been a wonderful and bright time together as we’ve worked toward this point, the final episode of Hilda‘s first season. It’s been so wonderful, the show has even made our best of the year list. The fun won’t end though as Netflix has greenlit Hilda for another season. So let’s see where we end up and breathe a sigh of relief that there’s still so much more to come. Warning: spoilers.

Teased in the previous episode, we’re finally given a more in-depth and thorough examination of the extra spaces, those Nisse spaces. “The Black Hound” introduces the idea there’s extra space even on the outside. However, it’s a place that no Nisse would dare to venture, since it’s so big and expansive it would be quite easy to get lost. The climax of the episode involves the characters being chased through the extra spaces, popping up in and out all over Trolberg, pursued by the Black Hound. Strangely, I didn’t think this sequence was as exciting in animation as it was in the comics, though that by no way means it was ill-handled or anything. The animators clearly had a lot of fun shoving the Black Hound into the smallest and most cramped spaces. They also had a lot of fun leaving a trail of destruction in his wake.

Hilda uses the Black Hound to wrap up the lingering plot threads from the series. Frida makes peace with David and Hilda after the Mara teenagers are quick to abandon her. Without a second thought, David and Hilda whisk her away. We learn how Tontu, the Nisse, got banished from his house. Additionally, we’re shown how Nisse are being banished from their homes all over the city, leaving a bunch of furry men wandering about aimlessly, accusing the others of all being liars. The Hound interrupts the Sparrow Scout End of Year Camping Trip. While it isn’t instrumental in keeping Hilda from earning all those Sparrow Scout badges, it’s also still part of the problem. Of course, it seems like the Sparrow Scouts existed mostly to get Hilda into fantastic situations.

The Black Hound, it turns out, is a barghest. Well, a sort of kid-friendly barghest, one who doesn’t kill those who look upon it. (He does eat a few people though.) Hunters immediately set out to try to apprehend it. They roam Trolberg with their woodsy outfits and crossbows.

True to form, while the rest of the city is in turmoil about its presence, Hilda immediately understands what’s wrong. She tells her mom the Black Hound is probably lost and hungry, which is why it’s irritated. When she does finally encounter it, her only concern is to try to get it back home.

The barghest, we also learn, is the puppy of the Nisse who lives in Hilda’s house. He found it lost and abandoned many years ago and took him in. The Nisse was forced to give it up once his parents discovered it. All the barghest, whose name is Jelly Bean, wants is to be reunited with its person. Or its Nisse, whichever you prefer.

The creators keep everything in “The Black Hound” in the orbit of the Nisse and the barghest’s plights. Regardless of which direction the show goes in, of what all the characters are doing, it keeps the episode stay grounded, under control. At the end of the day, a lost, misunderstood creature just trying to get home seems like the most essentially way to end the first season of this show.

“The Black Hound” ends with Jelly Bean and Hilda’s House Nisse wandering around the Great Forest. They pass the Wood Man who tells them about how there used to be a girl who lived in these ruins of a house, who befriended a giant, and who would probably befriend him again if given the chance. The show’s two biggest themes have centered around what makes for a home and what it means to be a friend. Both common in kids’ media, sure, but hardly any handled as sweetly as this.

By the end of the episode, Hilda has become comfortable with her life in Trolberg. She hasn’t had to abandon any of the traits that make her an adventurer. Additionally, she’s been able to start treating other people with the same behavior she previously only had to other creatures. During the climactic chase, she goes out of her way to return Frida’s book back to her.

Hilda’s Mum, though, has kind of gotten more fearful? She’s willing to let Hilda be herself and gives her somewhat of a wider breadth than when she was Hilda’s only companion. But I guess after having enough giants stomp on one house and enormous dogs trash another, it’s bound to make someone more nervous.

David has started conquering his fears. He’s started standing up for himself. He maybe is content to follow along with what the girls want to do but he’s not hiding at shadows.

Frida realized her true friends, has allowed herself to be more comfortable with imperfection. She’s still the Type A control freak, but there’s a more looseness to her character by the end of the season.

And Twig, Twig is simply the best.

“The Black Hound” does everything a finale ought to do. It wraps up lingering plot threads but doesn’t rely strictly on those threads to drive the narrative. The episode is mostly about Hilda looking for the missing Tontu, with everything else crashing in around it.

The season hits some high high notes over here. Hilda is funny and exciting and scary and engrossing. I feared at first it only would be able to stand up when it worked directly with the source material (there was a drastic drop around the fourth episode, when they’d exhausted Pearson’s books) but I think they were able to carve out their own identity and presence. I think this is one of the most cherish-able shows on Netflix, the kind its younger audience will remember fondly many years from now and not be disappointed by how it holds up.

5. The Series, as an Adaptation

The question that always comes up with this material is what makes for a good adaptation? Is it fealty to the source material? Is it the willingness to go in a different direction while keeping the soul of it alive? Is it about being true to the emotion of the original?

For the most part, Hilda has been a fairly straightforward adaptation of the comics. Well, for about five episodes. Even when it exhausted its material, there was something distinctly “Hilda” about what we were watching. The show maintained that charismatic tone, that pastel aesthetic, that wonder and awe of the greater world that existed in the comics. The series used much of its extra time to flush out characters who appeared only in the background of the comics or re-appropriate some of seen-in-passing characters in new ways. (The Rat King, the Water Spirit.) Ultimately, I don’t think it was made specifically for fans of the comics but it took nothing from them. It exists, it’s wonderful, and it’s worth watching again.

See you next season. 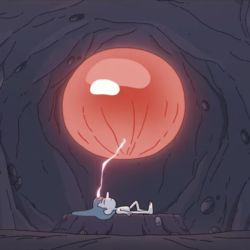 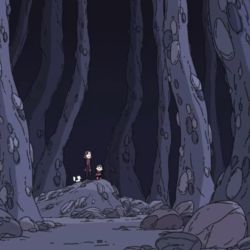 Deep in the heart of the mountain, where stone slugs carve shapes through hanging rocks, where color has evaporated and turned the world dour and gray, where everything sits still and silent, there flows a magnificent underground waterfall. It feeds into a subterranean lake with a winding stream that stretches through the infinite rocks. It […] 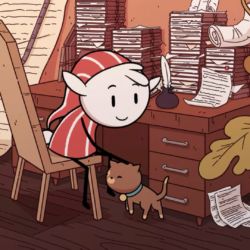 Five Thoughts on Hilda’s “The Replacement”

The elves pride themselves on their thoroughness. Their culture, built around bureaucracy, strives to cite and document every idea, action, and motivation. They want truth, objectivity, where every note, every detail is meticulously sourced and verified. This desire for total accountability has made the Elven higher-ups begin to question Alfur’s reliability in “The Replacement,” written […]