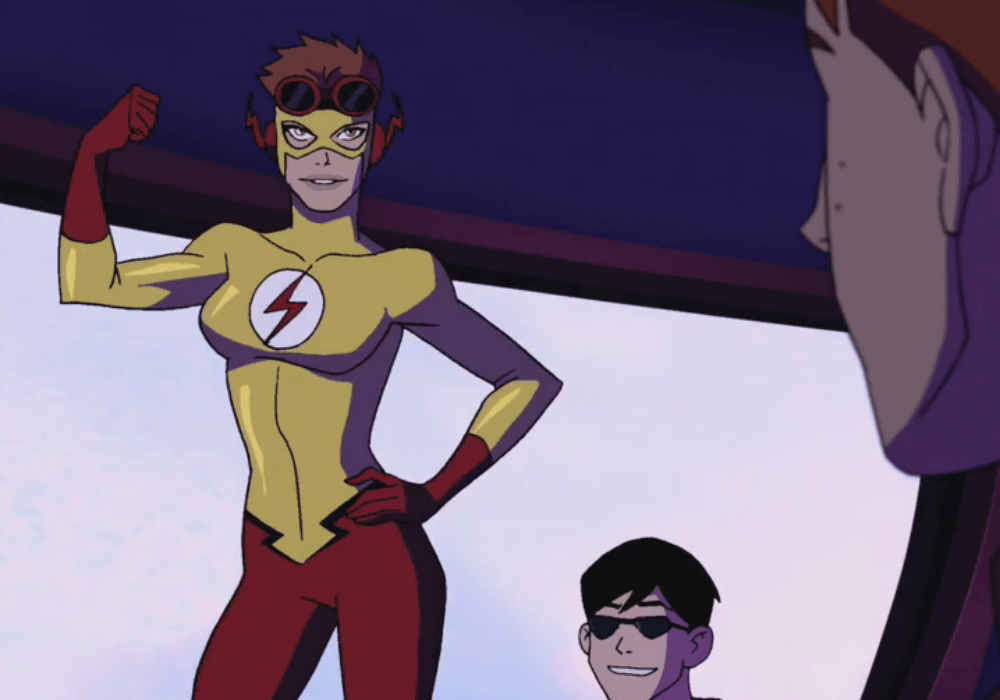 We continue the Multiversity Summer Binge with the third episode of Young Justice as the team continues to form and Miss Martian is introduced. So little and so much happens in this episode, as some of the oddly, unnoticed by me the first time I watched this show, sexist ideas in this show are reinforced and the new team’s island headquarters are introduced. As I write this I too am enjoying a beach vacation. Feels very appropriate as we look into the new beachside property the League loans to the team. Welcome to Happy Harbor and Mount Justice folks! Of course spoilers abound. Let’s get to work!

We get our first real introduction to Miss Martian in this episode. M’gann M’orzz, but you can just call her Megan. Megan is so innocent in this episode just barely picking up Earth customs and not quite knowing exactly what her role is to be on this team or on Earth is going to be quite yet. All she desires is to be liked and so of course she shows off by trying to communicate with the team telepathically which they are all uncomfortable with. She also begins to tease the larger character arc she has, starting into “I learned how to make these cookies in episode 17…” before stopping and throwing out her signature “Hello Megan!” She’s got a long way to go, and a lot of darker turns to take before she becomes one of the best characters on the show, but thank God there’s finally a woman who talks here. Speaking though of being the only women in a 30-minute long animated show full of men…

So when we’re first introduced to Megan in this episode she gives Robin, Wally, and Kaldur a tour of the cave and IMMEDIATELY Wally hits on her like no one’s around and that this behavior is perfectly ok. He tells her finally when Red Tornado leaves “Wanna know what I’m thinking?” to which Dick replies “We all know what you’re thinking.” Not only is Wally super creepy, he clearly just has one thing on his mind. Guess he thinks so fast that he just gets to the point…

Also when the team is on the bio ship and Robin asks Megan to shapeshift (Robin’s a lot more subtle, but definitely has a one-track mind as well) she does, and transforms into female versions of Robin and Wally, which I guess is a turn on for them. Something about the spandex, eh? Wally tells her, “Is it wrong that I think I’m hot?” Yes. Yes it is.

3. We have female dialogue, but let’s not kid ourselves we have a long way to go.

So the dudes treat Miss Martian like crap. Like yes she’s inexperienced, but clearly she has more power than most of you guys. Robin chastises her after she changes into female versions of him and Wally saying “You won’t fool anyone with those,” which I don’t know if he was talking about the actually shapeshifting or her boobs…both are bad.

When Megan mistakes Mister Twister (we’ll get to him) for Red Tornado, because she can’t read his mind and all these teenagers have insecurity issues, they all drag her down hard. Wally tells her to hit the showers, because everyone else just has so much experience. Have we forgotten Superboy is like 10 minutes old? Of course Megan is the only reason the team wins in the end as she comes up with the plan and brings them together, and it is extremely satisfying.

We talk about colloquially how this show is a hallmark of diversity and representation and that’s how I’ve always remembered it, but these first 3 episodes have shown that Young Justice has a ways to go and has not aged as well on the front end. I wholeheartedly believe though that season 3 will be much better on this front.

You gotta love the homage villains. Mister Twister is one of those that the Teen Titans have fought repeatedly and so it makes sense that he would show up as this team is forming. He recently appeared in the “Titans Hunt” maxiseries leading up to Rebirth. He furthers the theme of the episode as the team wonders if this whole thing is a joke or not and he calls them all children. He also seems connected to Red Tornado which is an awesome way to further the plot of the season as the team is clearly fighting bigger enemies, and works give the team a higher class enemy to fight. Mister Twister, while a one-off villain, and perhaps being whiny in motivation, works here. Also he’s voiced by John de Lancie who is freakin Q in Star Trek: TNG, DS9, and Voyager and is one of the best guest stars of that whole universe. Number of Star Trek actors voicing villains so far = 2.

The team really comes together here, and while they continue to have doubts about why they exist, they come to realize they won’t, and cannot, be the junior Justice League like Speedy tells them at the beginning of the episode. The character moments are really good here as Robin continues his word play changing disturbed to “turbed,” Wally starts his trophy collection with Twister’s eye, and Superboy ends the episode with “sorry,” which is gorgeous. All these kids are starting to learn and grow and become a family. Now all we need is Artemis to arrive…

That’s it for this week! Sound off in the comments and look next week as the team goes on their first real mission! I, however, am getting back to the beach and my piña colada.