Dan Watters is the writer behind “Lucifer,” one quarter of the ‘Sandman Universe’ titles that Vertigo launched this summer. This is the third series starring Lucifer that DC has published under the Vertigo banner, and Watters has already established a totally different tone than the two prior runs. We spoke with Watters at New York Comic Con 2018 about what he brings to the series, and how the book will be different than the past iterations. 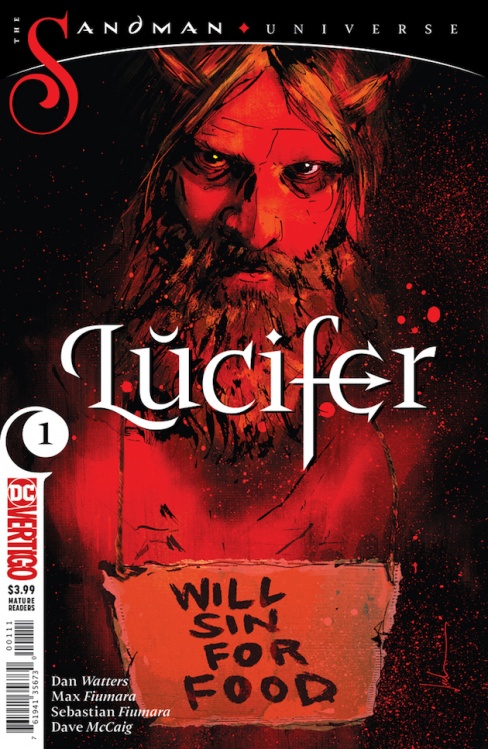 This will be the third big series that Lucifer has had. We’ve had, of course, the Mike Carey series, and we had the very short-lived Holly Black series. My question, if you could describe to me your Lucifer, who is he?

We’re essentially taking this character who is the second most powerful being in existence. He’s this fallen angel with this golden hair and a six pack, and we’re breaking him physically, blinding him, doing all sorts of horrible things to his body. So he starts falling apart, and essentially just has to experience what humans go through towards the end of their lives, and realize that maybe he didn’t have it so bad to begin with.

We caught a little bit of a glimpse of your run in “Sandman Universe” #1, where what you described him as doing some very odd things. Where’s it going to pick up leading from that into issue one?

DW: We’re starting issue one in media res, so he’s trapped in this place, he can’t remember how he got there. He hasn’t got any eyes. He’s surrounded by people he vaguely remembers. And he’s trying to escape. But we will be flashing back plenty, whether it’s to the scene we saw in “Sandman Universe” #1, which was a flashback in itself. Or whether it be to all different parts of history in which he’s come up to earth and gotten involved in humans’ business. We’ll be seeing a lot of backwards and forwards movement.

You’ve been part of a lot of the recent “Assassin’s Creed” books. I want to ask, Lucifer as a character is both a company owned character but who also could be part of a much grander mythology. How do you try tailoring that bigger mythology of all this history of Lucifer over the last thousands of years into your interpretation?

DW: It’s really freeing because there’s so much of it, essentially, that we can pick and choose what we want to talk about, where we want to go, and sort of mold our own thing entirely. The amount of stuff that’s already being covered with him in the 68, or something, issues. I think it’s more.

The fact that we can … I’m not saying that we necessarily will or not, but we can essentially not touch on any of that stuff again, and we still never would run out of material to draw from. It entirely lets us create our own thing even working within a wider universe.

You’ve been working with Max and Sebastian Fiumara. How is the process gone between you guys? Is your scripting tighter, or is it more plot driven, giving them a lot of free rein?

DW: Every time you work with another artist, it’s kind of like picking up from scratch, and you have to work out how each other work, and how much direction. Never mind for two, how much will they find stifling, or how much will they be just like, “You’re not doing your job, give me an actual script. Stop making me deal with the work. You lazy worker.”

There was a lot more back and forth in the beginning just when we were working out how we wanted things to look, how we wanted things to feel. But they really, really got it what I wanted to do with the character, and I think they wanted to do similar kind of stuff. It’s such an easy clichéd think to say, but it has been a really, really easy process working with them both.

Being that Lucifer is tied into religion,and you don’t have to answer this if it’s too personal: how does your own personal belief system tie into your own working on this?

DW: I was very much raised, not in a super Christian family, but went to church, and I went to a very, very Catholic secondary school, high school, which actually informs a lot of it. I’m really interested in religion. I’m really fascinated by religion. My own personal belief system … I was a very hardcore punk rocker, atheists, in your face teenager. I used to feel it was really, really great in my super Catholic school and just browse the Church of Satan website and all this stuff. I thought it was super edgy.

I’ve come to be far more interested in religion in how it forms part of people’s belief systems, and how you can look at it in totally different ways. Sometimes it only takes a sort of slight, sort of linguistic twist, to go over and talk about philosophy, as opposed to theology.

I’m using a lot of religious reference. Kierkegaard and stuff like that. Frankly, we’re doing kind of a dark gothic take on Lucifer, and I don’t think there’s anything more gothic than Catholic church.