It’s a new day for the Doctor with Jodie Whittaker on board, and with ratings for her debut episode on October 7th the highest in the UK of any of the other Doctors’ debuts since the show was revived in 2005, viewers are eager to see what new life the first female Doctor will bring to the franchise.  Titan Comics, the current license holder of Doctor Who, wisely used this change to re-boot their own Doctor Who comics, starting with “The Road to the Thirteenth Doctor” series this summer and September’s “Doctor Who: The Thirteenth Doctor” #0 special, with 12 stories each featuring a past Doctor – – a time for Thirteen to reflect on her past before embarking on a new future.

We chatted with two of the artists on “Doctor Who: The Thirteenth Doctor” #0, Claudia Ianniciello and Mariano LaClaustra, about their work on this issue and their own connections with the classic franchise.

Were either of you Doctor Who fans, before you started work on this special? 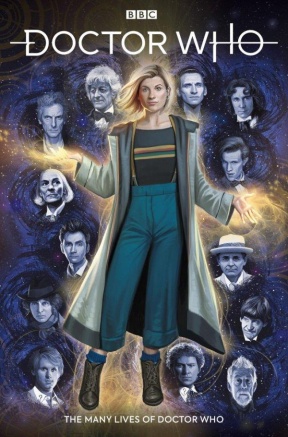 Doctor Who: The Thirteenth Doctor #0

Claudia Ianniciello: Yes, yes I am a Whovian, myself. I actually started watching Doctor Who because of the comics. I mean, when I did my first comic book about Doctor Who, Doctor Who was a special issue published by IDW, which was kind of a special issue with most of the Doctors, I don’t remember. I was on the Ninth Doctor, so I started with the Ninth and fell in love.

Mariano LaClaustra: I actually didn’t know quite well Doctor Who before I start working on comics. I’m from Argentina. [inaudible 00:01:19] some years ago. There is a big Whovian moment, I then find out that. But before that, I actually didn’t know anything about it. So I became a fan by doing the comics and then watching the series and really learned.

Mariano, do you have a favorite?

How is the comic scene in your respective home countries, in Italy and Argentina, any different than say here in the United States or in the United Kingdom? I know in Italy there is Lucca Comics and Games, which is a big convention, and I’m not sure what things are like in Argentina. Could you tell me a bit more?

ML: Well, in Argentina there was a big comic scene in the past like 13 years ago, but with the economic crisis we’re not quite enough. But we don’t have a big scene, there is no like you can make a living for comics working there. There are a lot a people with a lot a passion doing comics and there are a lot of artists ’cause we have a big comic tradition. Right now we actually you have to work for the US or the UK or Europe to make a living.

Claudia, you drew the 13th Doctor, ground breaking so many levels because it is the first female Doctor. What did you hope to bring to your depiction that really wasn’t there previously in terms of how you drew Jodie Whittaker?

CI: Oh wow. This question’s a challenge. Actually, I can really choose what to bring out of my version of the 13th Doctor Who because I have no idea how it will be. The show is coming up I think …

It’s Sunday, October 7th with a global simulcast, which is probably a first because in the United States Doctor Who was sometimes on a delay.

CI: Oh yeah, because of the time difference. And I don’t know, I just hope that this version of Doctor Who is not about stereotypes because she’s a female and I hope is just a Doctor and not just female Doctor. I don’t know if I’m clear with this, but I just hope it’s not about stereotypes about women and about how we are. I think she’s gonna portray the Doctor, whether each gender I don’t care.

Of all the stories contained in here, was there one that was your favorite to read?

CI: In this issue?

In this issue, yes.

Was there any Doctor that you wanted to illustrate that maybe you didn’t get a chance to do, you looked at it and was like “Oh, I wish I had done the Sixth Doctor.” For you Claudia, you’re a Christopher Eccleston maybe, “I wish I had done number Nine.”

CI: Yes, yes, in some way yes. Well, actually since I’m an artist, this is my very first comic pages. I had the chance to draw every Doctor I want to do because if they ask me, “Okay, we are willing to let you do cover art. Which one do you prefer to draw?” So I can choose actually which one I want. So I’m happy with the 13th.

How about for you, Mariano?

ML: On this issue I really liked that I had the chance to do the first Doctor and I drew it in a vintage style, like in a modern style with some of the 60 or 70 cover style sci-fi magazines. That was very fun.