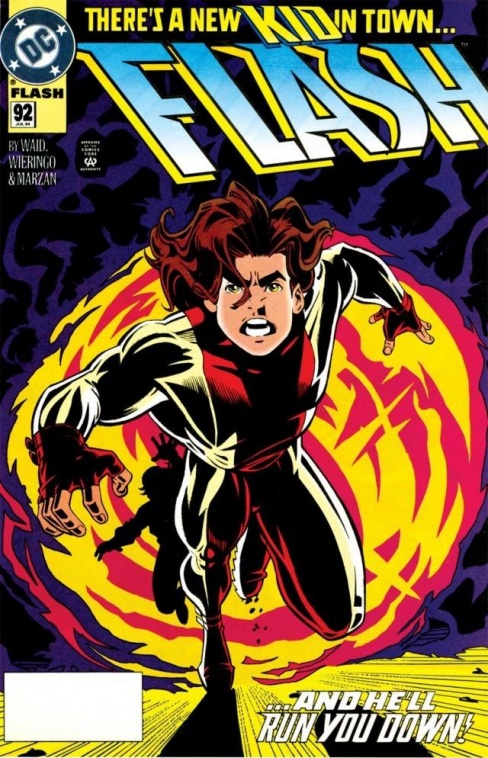 Every person that has ever picked up a piece of entertainment has a special character, whether it’s comics, video games, movies e.t.c. When it comes to superheroes, it’s not the Dark Knight I think of or the Last Son of Krypton or the First Avenger. No no. When I think of my favorite superhero in the entire genre, I think of a kid with gold eyes, a mop of auburn hair, big feet and no internal sense of danger. I’m of course talking about Bart Allen a.k.a. Impulse a.k.a. Kid Flash, created by Mark Waid and the late Mike Wieringo. Grandson of the Silver Age Flash, Barry Allen. So, for “Flash Appreciation Day”, I thought I would talk about the Fastest Teen Alive and how much he means to me personally and how I perceive the Flash mythos.

Bart Allen debuted in “The Flash #92” in a story called “Reckless Youth”. He returned with his Grandma Iris from the 30th Century to “present” day. Bart’s origin is simple enough. He inherited the powers of his grandfather and his father, but they were present since birth. As such, his metabolism was just as fast and it caused him to rapidly grow. By the time he was two he looked twelve. As such, the EarthGov of the 30th century put him in a virtual reality program all his life, feeding him scenarios and such to acclimate him, but not actually solve the problem. Because of this environment, Bart has little to no sense of danger because he thought nothing was real or could hurt him. In the past, Bart and Wally West did have a bit of friction, but Waid really sold the fear Bart had when he realized he could get hurt.

And it was in issue #92 that made me think about one of Bart’s most important traits: his eyes.

Now, I promised myself I wouldn’t bash the New 52 Kid Flash much in this (because that character is not Bart Allen, metaphorically and literally), but I believe the biggest criticism I have of Brett Booth’s Kid Flash design is that it hides Bart’s eyes. There is that domino mask-esque covering on it. And in issue #92, the first thing Wieringo draws of the present day Bart’s face is a close up of those amber eyes. Yes they can be… well… Impish, if you will. But at this point, they hold no deceptions. And as the years continued, those eyes have been a big thing in expressing the character’s emotions. 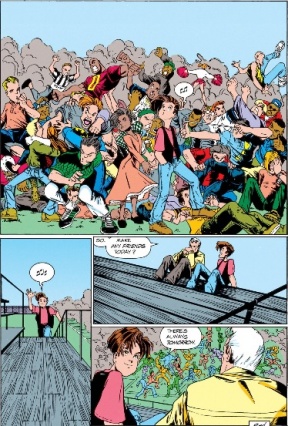 As I re-read stories for this article, I think the biggest impact Bart had on me as I grew, falling in and out and back again with comics, was the permission to be weird. Bart was always a bit socially awkward, in part because of being from another time, his growing up in a virtual reality program and his more literal thinking (speaking of, another trait was his thinking in pictures, as opposed to text boxes, which I wish I’d see more often). To see a character that didn’t fit fully in still go on to do great and cool things, make friends and have fun was a big thing for me. And yes, his flaws can be played for comedy, but there was never any malicious intent behind it. This was a kid with his head in the clouds experiencing the pangs of growing up, but not in a way that had to make him darker or meaner or more cynical.

Perhaps my favorite story with Bart is called “Mercury Falling” (“Impulse #62-67”), written by Todd Dezago and illustrated by Ethan Van Scriver. Now, I’m not going to say the story is faultless; Van Scriver’s cartoon work could be very busy at times, but this shows a Bart that is serious but true to the character. In it, Bart’s mentor/caretaker/father-figure Max Mercury is dying and Bart is inadvertently switched with Inertia, his clone. It’s a story where Bart has to face the fact that someone so close to him may not be around much longer. But it wasn’t just Bart’s development here that affected me. I always felt that Inertia had more potential to be more than a foil to Bart instead of what would inevitably happen to him in later books like “Flash: Fastest Man Alive” and the odious “Final Crisis: Rogues Revenge”. It even comes to a point where Max Mercury nearly convinces Inertia to turn away from evil. When it fails, the fight between Impulse and Inertia is so powerful, and it shows that Bart would be ready to die for Max. It shows that the character really has matured since arriving, without having to make the character dark.

Now that I’ve talked to you about how Bart affected me as a person, let me discuss how he affects my perception in the Flash mythos. Before Flashpoint, the Flash was special because it did feel like time was moving forward for these characters. You had multiple generations of them running around, from Max and Jay Garrick to Wally and Jesse Chambers to Bart Allen and his cousin Jenni Ognats and even to Irey and Jai West. And, at least to me, Bart was the proof of that family’s history, that legacy, going far into the future. 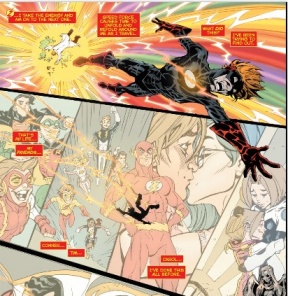 Because while Bart’s paternal family is the Allens, his maternal family is the Thawnes. Yes the Professor Zoom/Reverse-Flash Thawnes. Bart, through both his parents, is the culmination of familial rivalry that lasted literally a thousand years. It is also proof that not everyone in the Thawne family was evil. As far as I recall, the fact that he comes from both these families was never really explored in depth before “Flashpoint”, which is a real shame. It could have been a real interesting story.

At the end of it all, Bart Allen was a friend when I didn’t have a lot of friends. And as the years go by, it taught me that sometimes you have to be a bit Impulsive. So here’s to you, Bart. Here’s to you and your relationships with Max Mercury, Carol Bucklen, the gang in Manchester, Tim, Kon and Cassie, and the rest of the Flash Family. And here’s to the creators that fostered this character, from Mark Waid and Mike Wieringo at the beginning to Todd Dezago & Ethan Van Scriver and Peter David & Todd Nauck in “Young Justice” to Sterling Gates who, in my opinion, wrote the last Bart Allen story with “Kid Flash Lost”.

On this Flash Appreciation Day, you have one fan that hasn’t forgotten.