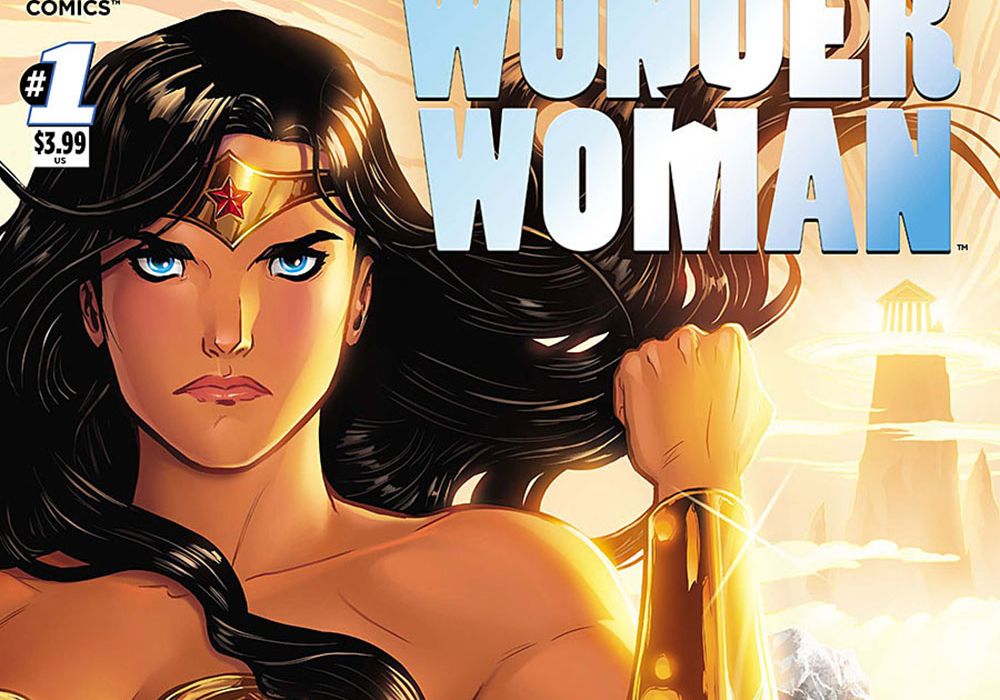 Best Digital First or Webcomic
Now more than ever, people aren’t necessarily getting their sequential art from books purchased at a store. In many cases, some of these books aren’t available in print at all, or at least not for a considerable time after they appear on line. These are some of the best of both digital first comics (collected every few months in print) and webcomics (maybe collected, maybe not). 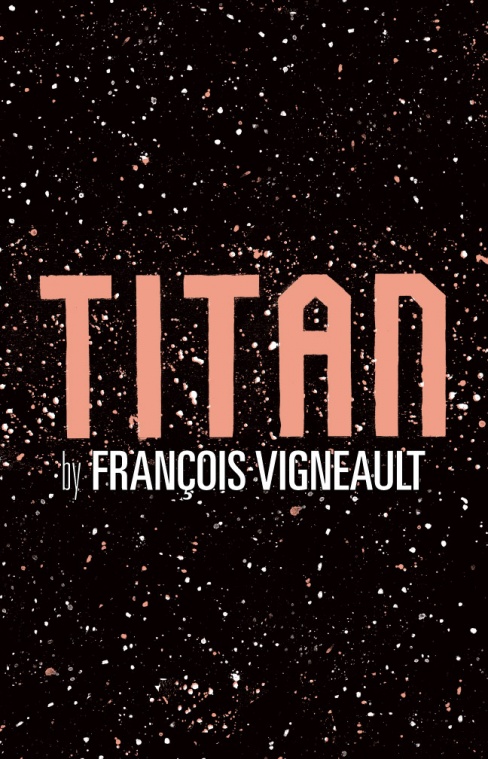 (Greg Matiasevich) Francois Vigneault’s “Titan” was one of, if not THE, best comics discovery of 2015 for me. Thankfully this category isn’t restricted to NEW digital comics, so I can still give it my full endorsement. I’ve actually been following this through its print incarnation, but that’s simply because it’s so good I want to prolong the experience as long as possible (plus support an indy artist and my LCS at the same time). You can check “Titan” out in all it’s glory here.

There seems to be an unintended theme developing in the awards I’m discussed so far: alternative science fiction. Not that this and “World of Edena” are too far from the mainstream, but rather they don’t fit comfortably into the space fantasy/blockbuster mode gripping audience/reader attentions at the moment. It’s not transforming robots or laser-sword-wielding space mystics…

It’s love and labor relations in space. And Vigneault makes it work by playing to his strengths. He doesn’t have the type of art style traditionally suited for mainstream sci-fi expectations (a Byrne, an Immonen, or a Moebius) so he doesn’t try and push too hard in that direction visually, but he does go far enough to sell the premise: a human labor inspector visiting a mining colon on Titan populated by workers genetically altered to survive that moon’s harsh environment. Vigneault plays up the drama (is he trying to shut the obsolete plant down? Or address legitimate concerns?) and the interaction (human inspector building trust with a Titan worker) deftly and with intelligence. If you liked Moon or sci-fi stories of that nature, you will enjoy “Titan”. 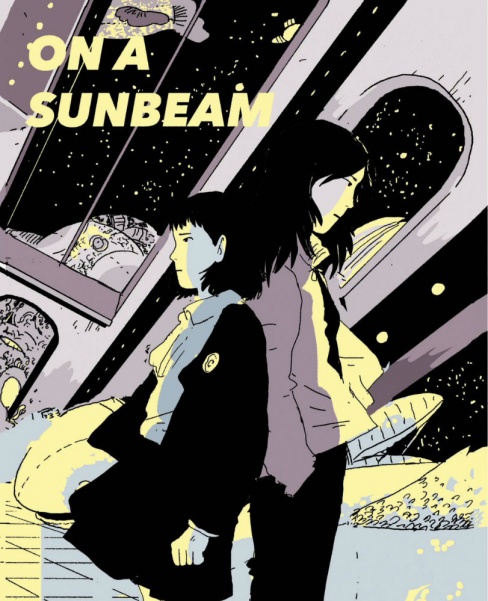 (Matt Garcia) Tillie Walden is a beast. The prolific cartoonist has already produced quite a body of work, much of it effective, emotional, and powerful. “On a Sunbeam” feels the next evolution in her cartooning. It’s longer than her usual fare, for one, with a wider cast of characters, more locations, and deeper, more complicated and developed relationships. Each update is insanely long, and that amount of scene and story allows you to immerse yourself in Walden’s universe.

It’s about school and work, about growing up and outer space. It’s about the classical and the modern, the traditional and the evolving. The art is gorgeous, with fully realized architecture and consistently interesting design work. It’s very easy to get swept up in the material. What’s more, Walden grows stronger and stronger as the story goes on, approaching the page with better confidence. “On a Sunbeam” is sweeping, emotional, and wonderful.

1. The Legend of Wonder Woman 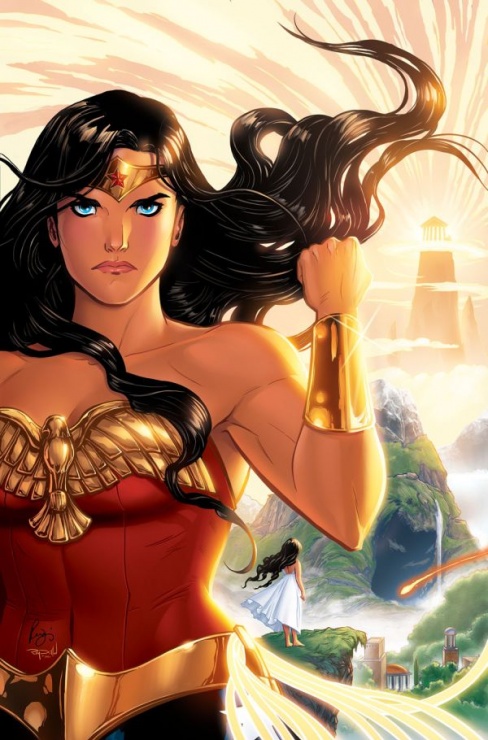 (Alice W. Castle) Let’s face it: we all know Wonder Woman’s origin story front to back. Outside of maybe only Batman and Spider-Man, it’s the most retold origin story in superhero comics. Born of clay, raised isolated in a secluded paradise and eventually ventures out into Man’s World to bring messages of peace and justice for all. The thing is, for all of the retellings we’ve seen, creators rarely flesh out those early days of Diana’s life on Themyscira into something worth reading. Most go through the same rote plot points of Diana’s early adulthood before shipping her off to be Wonder Woman where the real story can begin.

What makes Renae De Liz and Ray Dillon’s “Legend Of Wonder Woman: different is in how much care they put into telling the story of Diana’s younger years. Infusing the island of Themiscyra with a sense of wonder and history and its peoples with a sense of history outside of simply being Greek warrior women, De Liz and Dillon take the concept of an origin story and expand into something of a biopic. They put as much care and attention into Diana’s childhood on Themyscira as her exploits as Wonder Woman later in the series.

If there’s one Wonder Woman comic you read this year, better make it this one.

Brian: This category caused the biggest debate in our editorial ranks, as Matt was adamant that we only count webcomics into the category, where Mike felt it was important to be as broad with our definition as possible. I think both are correct; there is a totally different genre in play with a true webcomic, whereas digital first books are often just chopped up print comics. But I also know that our site – through no fault of folks like Matt – doesn’t cover webcomics to the same degree that, perhaps, we should.

Maybe in the next year, we can boost our webcomic coverage to expose not just our readers, but also our staff, to more of the genre.

Matt: This is an iffy/gray category, because by saying only webcomics, we might limit the anthologies Iron Circus puts out, or the collections you see from all sorts of talented peeps who’s print-run is only limited to zines they make for comics shows or the random title you might find in comiXology Submit. I think what gives me the most pause here is that this is a place for people far away from the Marvel/DC corporate board. Online creators and cartoonists have a wide canvas and freedom to tell any story they like in almost any way they can imagine. Like, this is where something like “Mis(h)adra” can exist. Or “Buying Time” or “Thunderpaw” or anything you can find at Study Group. There’s so much out there and a lot of it is great, a true passion project that brings results you don’t always see in many corporate comics. Don’t get me wrong, because I think “The Legend of Wonder Woman” is a fantastic book, but it was made for your usual comic rack. I don’t feel like this was the category for it.

These things are essentially being given away. I, too, hope our coverage and reach grows for this format in the next year.

Mike: I’m not the most well read webcomics reader, I’ll admit. Sure, I’ll borough into “Octopus Pie” or binge on sites like What Things Do or Study Group, but my knowledge in the field is a little shallow. So when the debate of whether or not to include ‘digital first’ titles in this category came up, I was for it. If I need to cast a net, I want to do so as widely as possible, and combining these two distinct types of comics was a way to do so. I stand by that because, as can be seen in the list above, the MC staff were in the same boat as me.

Like we touched on in the Foreign Material category, just a few years ago we wouldn’t have been able to justify that as something for the staff to vote on. Now, thanks to shifts in the market and a few excited peers, everyone on staff could have filled out their ballots with at least the manga titles they’re reading. So, with that sort of shift in mind, my hope is that in the next year or two we could be a little more narrow with how we define this particular category.