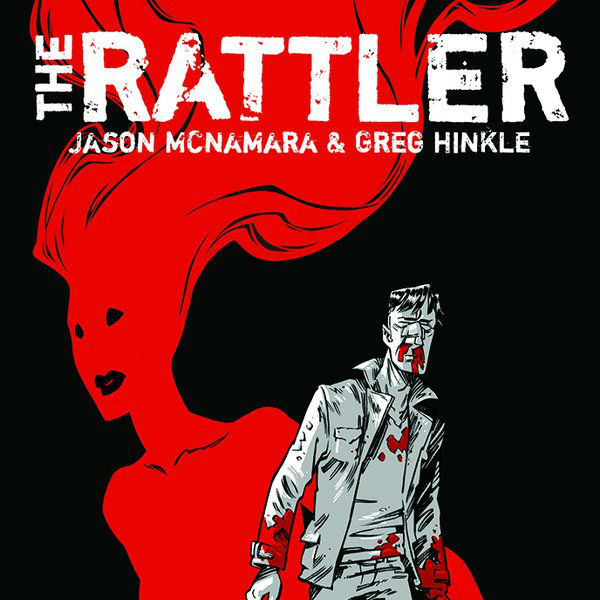 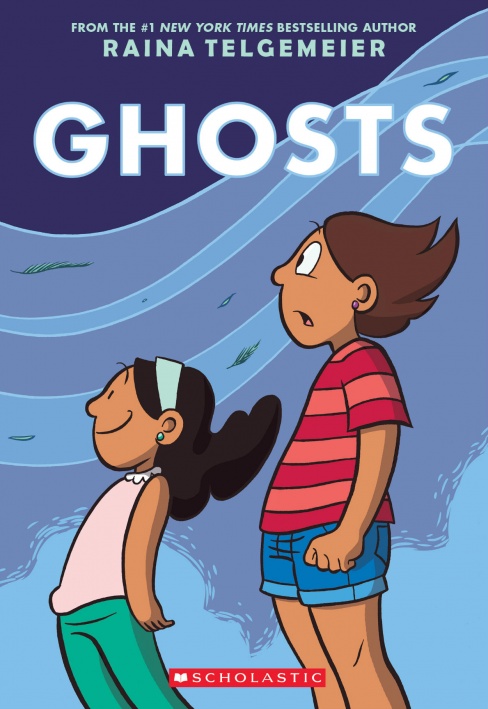 (Jess Camacho) Raina Telgemeier is selling through books like crazy, but for some reason we don’t talk about it enough. We’re preoccupied with what superheroes are doing and we miss the millions of books she is selling to kids and families. This year, Telgemeier put out “Ghosts”, a new original story that tells the story of Cat, a young girl who’s family moves to California so that her sister, suffering from cystic fibrosis, can breathe more comfortable air. Cat and her sister Maya couldn’t be more different: Maya is more vibrant than her sister who’s more subdued and introverted. “Ghosts” does something that all media towards children can often struggle with — it deals with death. Throughout this entire book, Telgemeier gets deep into some heavy subject matter that can be tough to talk about with kids and she does it in a way that doesn’t talk down to them or hide the facts. Telgemeier takes readers of all ages into an emotional story, filled with instantly engaging characters. without traumatizing them.

With that said, this isn’t all doom and gloom. She knows her audience and provides plenty of fun moments throughout. Her pacing in this longer story (longest page count for her so far) is fantastic and she packs in a lot of world building. You feel like you’re a part of this family and all their ups and downs. Telgemeier’s art is, of course, fantastic. It is a visual treat that captures the spirit of animation. The characters are emotive, the setting is engrossing and the spooky elements have just a tinge of horror to them to keep them from feeling too out of place. “Ghosts”, alongside her other work continues to prove why she’s one of the highest selling cartoonists working today.

4. The Longest Day of the Future 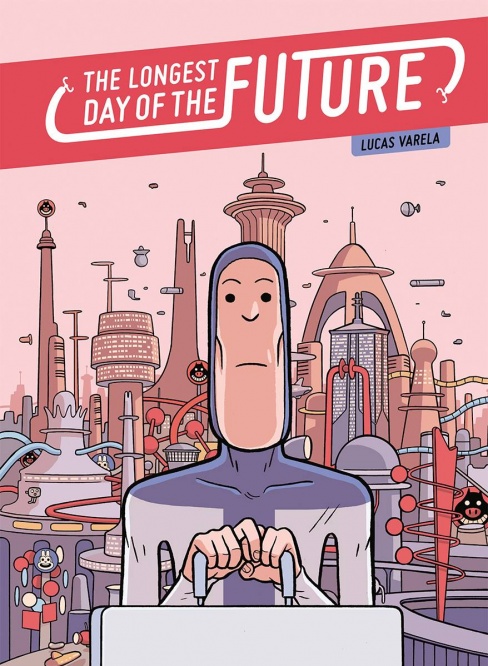 (Brian Salvatore) There is something magical to me, about a silent comic. It represents the genre at its purest form, and allows creators to, by adding an obstruction, find creative ways to express themselves and tell their stories. “The Longest Day of the Future” is a stunning example of this – a story of a futuristic society is as expansive and odd as anything you’ll read in a comic with dialogue. It is funny, heartbreaking, relatable and entirely foreign all at the same time. Lucas Varela ties disparate parts of his story – which is far more sprawling than you’d presume – and ends it in a masterful way. The whole package – art and story – are deceptively simple, but reveal a sophistication and depth that rewards re-reads. In fact, if you don’t mind… 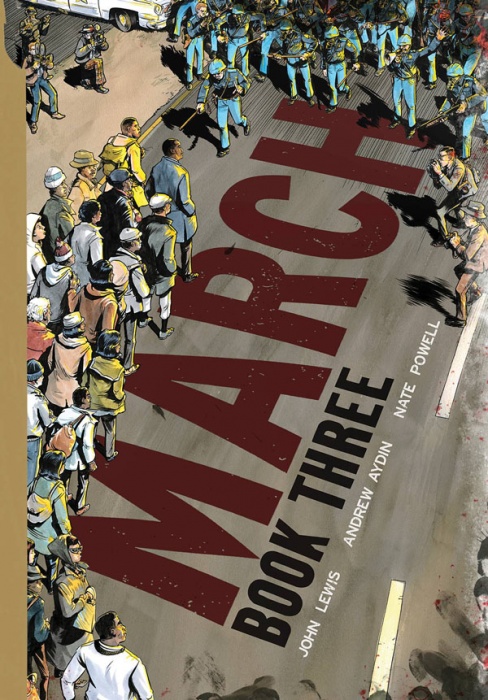 (Greg Matiasevich) I can’t think of another category in this Year in Review cycle offering me a bigger challenge to write up than this one. That may be surprising giving how enthusiastic I’ve been about this book and its two predecessors, but therein lies the problem. What else is there to say about what Powell, Aydin, and Lewis accomplish in “March: Book Three” that hasn’t been said elsewhere? It’s the culmination of a book that launched one comics career (Aydin), cemented another as a truly mainstream-visible talent (Powell), and gave voice to one of the few politicians of our times capable of speaking with clear moral tenor. If there is a canon for North American comics, “March” has earned a place in it. It showcases technique alongside powerful storytelling on every one of its 546 pages (246 for Book Three alone) and deserves to be on every bookshelf, in every classroom, and with every reader.

All that said, for me, reading “March” takes on a different feel now than even a few months ago. It always stirred emotions, good and bad. But now the hate Lewis and Aydin describe and Powell depicts feels more raw, while the hope a little harder to believe possible. What seemed to me (naively, in retrospect) closer to a documenting of the receding past now feels like an oncoming tomorrow with just a different set of players. While the majority of comics are still escapist entertainment (and fulfilling a definite need in that regard), “March” was never that type of book, then or now. “March” doesn’t escape; it confronts. By telling the story of John Lewis, “March”, like “The Montgomery Story” did for Lewis early in his life, lays out the steps he took to make the world give the justice it fought so hard to deny: be disciplined, be organized, be involved, be persistent. Spend every day putting one foot in front of the other to get to where you want to be. Don’t sit on the sidelines.

2. How to Talk to Girls at Parties 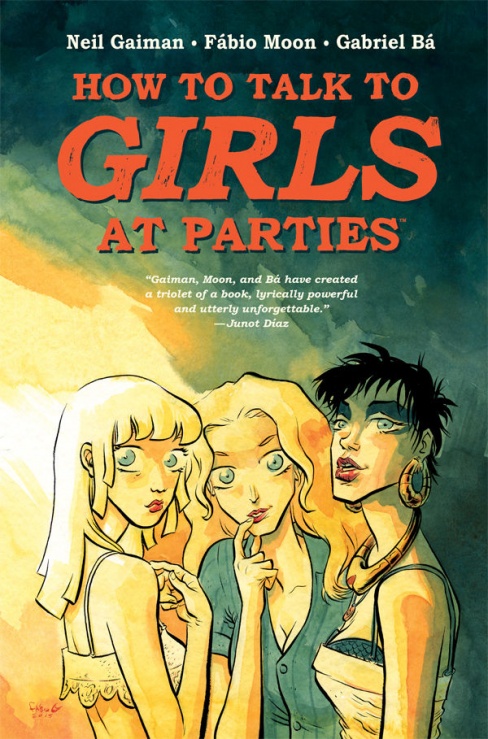 (Alice W. Castle) “How To Talk To Girls At Parties” was already a fantastic short story by Neil Gaiman that combined a sense of nostalgia over lost youth and clueless teenage antics with a sense of creeping dread and underlying science fiction. It’s a fascinating piece exploring the disconnection between narrator and reader as, even when looking back at the experiences of how young adulthood, he seems clueless the obvious impossibilities he is describing.

Fábio Moon and Gabriel Bá took that short story and expanded it, visualizing it in a graphic novel that not only perfectly captures the intricacies of the original story, but creates a new way of experiencing it without fundamentally changing it. That’s a tricky line to toe as most adaptations from one medium to the other feel the need to change the structure or content of the story to warp it to fit to the new format. Moon and Bá’s translation to the comics allows them to expand on the concept and visualize ideas that were only described in the short story while using dialogue and first person narration ripped directly from Gaiman’s prose. It’s honestly the best of both worlds and is a champion of translation and adaption from two masters of the form. Even though I’ve read this graphic novel multiple times since it’s release, it never fails to blow me away. 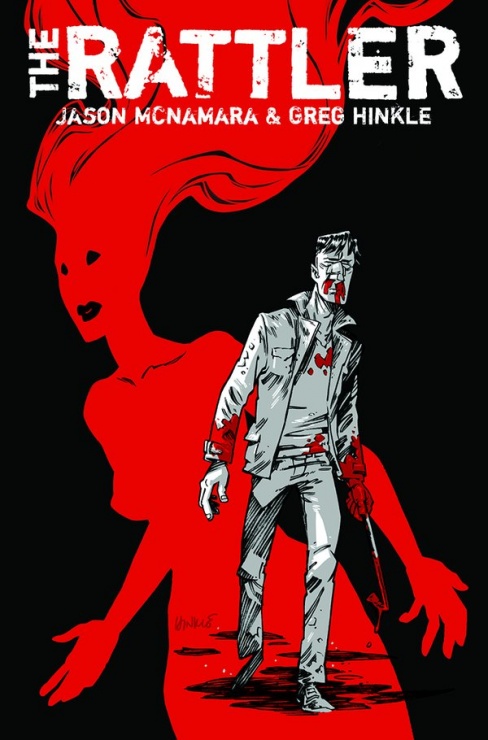 (Leo Johnson) Inspired by an actual event from writer Jason McNamara’s life, “The Rattler” is a tale of obsession, violence, and, somehow, love. The story is basically born out of a “what if” moment in McNamara’s life: what if the guy trying to abduct his friend had actually done it successfully? Like any good, somewhat selfish writer, he focuses that idea not on his friend, but on himself and how that moment and guilt would impact him (or the main character in “The Rattler”).

McNamara and artist Greg Hinkle craft a book that leaves you sufficiently creeped out, but also makes sure you don’t put it down. Hinkle’s strong artwork only helps to enhance the overall comic, whether it’s the brutality of certain scenes or inherent ridiculousness of others. While Stephen Thorne, the main character, is never really a truly likable one, you can’t help but want to read his story and the lengths he’ll go to to satisfy his desire for closure and finding his lost love. This is definitely a book worth tracking down.

Matt: Hard to argue with these picks, and I especially like that our staff chose everything from memoir to foreign sci-fi to fantasy. I do think we sightly undermine Raina Telgemeier’s talents by only talking about how many books she sells (I’m guilty of this, too), although the number is staggering. Her work obviously connects with people; quite frankly, more have probably read “Ghosts” already than any book that tops the Diamond charts. In any event, these are all solid recommendations.

Brian:I echo Matt’s comment about the breadth of picks. I find that OGNs are always a great gateway to get non-comics friends to give them a chance, and I think any of these would resonate with anyone who loves to read stories of any kind. These five books represent the scale and scope of what comics can be, perhaps, better than any other category this year.

Mike : I’ll also express my satisfaction with the range of comics on this list. There’s an easy argument to be made about this being one of, if not the, most important of all our categories. These are the comics that break through to libraries and the end caps of chain bookstores. Plus, there’s a silent book that earned a spot, which makes me feel all warm and fuzzy.