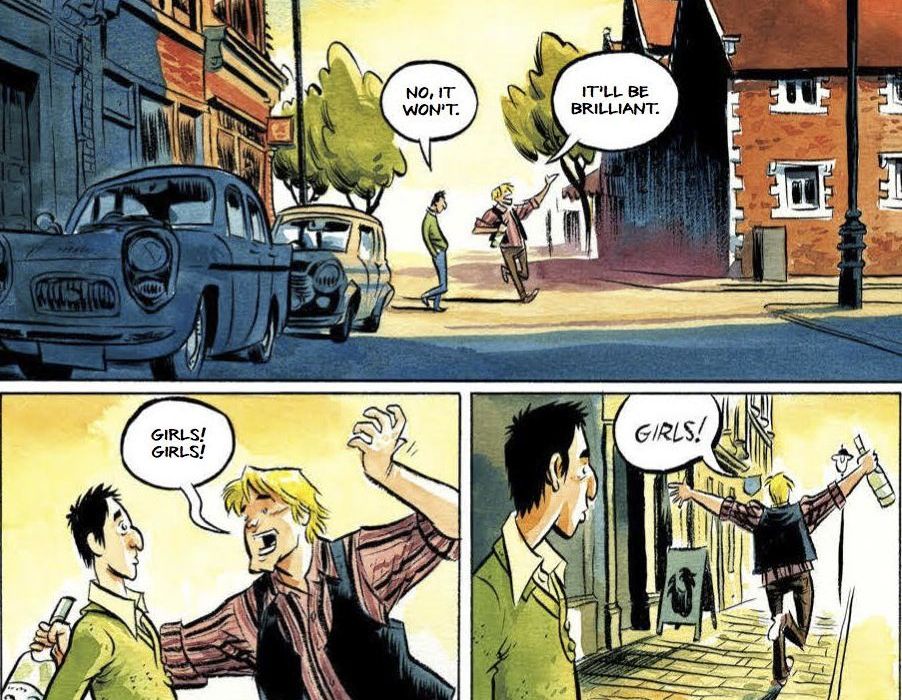 So, you’re at a party, right? And the girl you’re talking to, she’s beautiful. She’s so beautiful you’re not even listening to what she’s saying, you’re just watching the way her lips shape around the words.

Well, be careful when doing that. Because you never know what you could be missing when you’re not listening.

Written by Neil Gaiman, Gabriel Ba and Fabio Moon
Illustrated by Gabriel Ba and Fabio Moon
Enn is a sixteen-year-old boy who just doesn’t understand girls, while his friend Vic seems to have them all figured out. Both teenagers are in for the shock of their young lives, however, when they crash a local party only to discover that the girls there are far, far more than they appear!

From the Locus Award-winning short story by Neil Gaiman–one of the most celebrated authors of our time– and adapted in vibrant ink-and-watercolor illustrations by the Daytripper duo of Gabriel Bá and Fábio Moon, this original hardcover graphic novel is absolutely not to be missed!

“How To Talk To Girls At Parties” is a story built around a revelation. The trick of the story is that the narrator is not just unreliable, but he is as clueless now, retelling the story, as he was at fifteen when he experienced it and as the story progresses, the reader begins to piece the situation together in a way that Enn, the narrator, never could.

That makes talking about the story pretty tricky as one of the joys of the experience is the sudden realisation of just what the story is about. That being said, I’m still going to talk about it at length as this graphic novel adaptation of the short story by Gabriel Ba and Fabio Moon is an astounding achievement, so let me get the pre-amble out of the way for those of you who have never experienced they story and then we’ll get to the meat of it afterwards while those people go out and buy the book.

Gabriel Ba and Fabio Moon and, by far and away, two of the most accomplished comic creators of our time and this adaptation will sit in their canon was one of the most beautifully realised projects they have put together. Taking a short story that’s already a piece of fantastic writing and adapting it to read as a comic is no short order and Ba and Moon are able to translate the text fairly literally to the comic page, using the short story’s first person narration in captions as well as direct dialogue from the book while visualising a lot of the smaller moments in the text.

While Ba and Moon do a fantastic job of adapting Gaiman’s writing to the comics page, it’s their art that will really make this stand out. The watercolours and light ink lines create a very whimsical feel to the book right off the bat. There’s an immediate coming-of-age feel to the story that’s palpable in a way I can’t quite describe. The somewhat exaggerated features of the characters are incredibly stylistic and immediately unique and recognisable as people while staying wholly true to their descriptions in Gaiman’s prose.

The soft watercolour sunset of the streets of London that blends into the harsh shadows and neon pink and sickly green lighting of the interior of the party highlights the increasing tension of the story as the reader begins to realise how too deep Enn really is. The way Ba and Moon capture the ethereal beauty of the girls in the story, their large eyes that seem to pierce out of the page. It’s a work of art that deserves to be experienced even outside of the fact that it’s adapted from one of Gaiman’s most celebrated stories.

This is a creation by two artists who have a fundamental understanding of how and why a story works and is able to translate into a new medium, keeping the whole of the story intact while exploring those nooks and crannies of the story that might have gotten lost in the prose. I know it’s a little early in the review to be pulling this card, but I wholesale recommend to anyone reading this review that they go out and get themselves a copy of this graphic novel.

With that out of the way, though, I want to venture into spoiler territory. Nothing too major, but there’s no way to really critically discuss this work without giving away the revelation that you have while reading and I really don’t want to ruin that experience for anyone, so if you haven’t read the short story yet, this is your chance to exit.

Okay, are they all gone?

So… Bruce Willis is a ghost, right? No, okay, in all seriousness, Ba and Moon do a fantastic job of keeping that revelation alive in the adaptation of this story. With each interaction Enn has with a new girl, their dialogue becomes more clearly otherwordly and alien in a way that’s not just a factor of Enn being a clueless fifteen year old teenager. Ba and Moon take an opportunity with that to actually expand on the dialogue, creating visual cutaways to other scenes in the party while a character is talking to expand outside of just Enn’s point of view and creates an even more unsettling undertone to the story.

Not just that, but Ba and Moon visualise the latter girls’ speeches in a way that actually shows just how alien things get and while it’s something and it’s an interesting choice because one of the things that was most effectively about the short story was the ambiguity. Ba and Moon keep some of that ambiguity with the open ending, but the revelation is much more obvious in this translation thanks to some of the visualisations that Ba and Moon bring. This includes a final moment that is much more over-the-top than I would have originally pictured, but works thanks to it being in keeping with the rest of these visualisations. Wow, it’s hard to talk about this without just explaining the whole story.

All in all, this graphic novel was a shock in just how well adapted and realised it was, but when you think about it, a well realised graphic novel coming from Gabriel Ba and Fabio Moon is the least shocking thing. “How To Talk To Girls At Parties” was already a masterpiece, award winning short story and now it’s a masterpiece of a graphic novel that, honestly, everyone should read. Even if you’ve read the original short story. Especially if you’ve read the original short story just so you can see it realised in a new medium with such a delicate touch that even the smallest moments in the prose are paid tribute to. With a film adaptation of the short story coming up, I have no idea how it could ever top this.