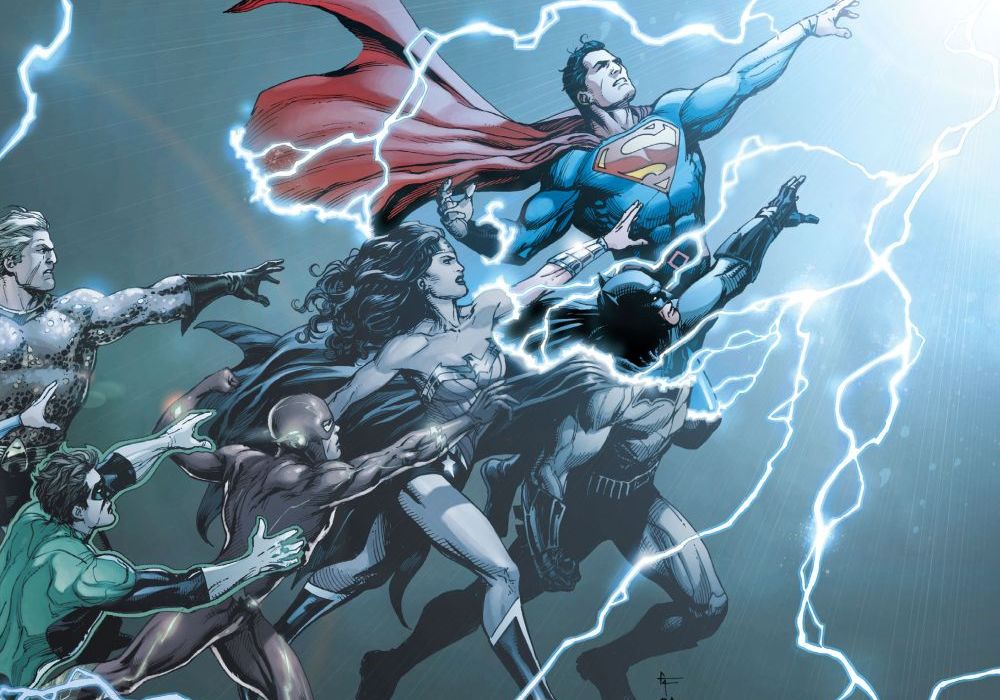 Best Single Issue or One-Shot
While most comics are long, continuous stories that span various months, if not years, if not decades, there is a special art to making a great single issue. Our list is quite varied, from the start of a line-wide movement to the end of a 20+ year journey (for now). 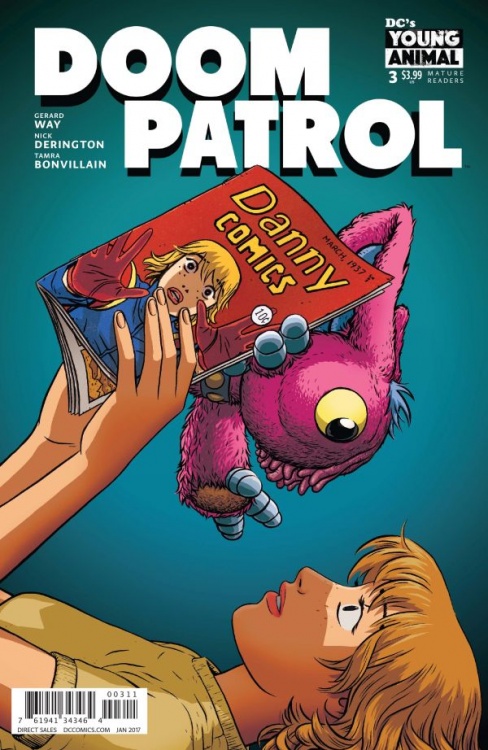 When DC Comics’ Young Animal was first announced, it almost sounded too good to be true. Too good to be published by DC in the post-New 52 world, at least. Giving the keys to a small line of books to Gerard Way seemed like such a no-brainer upon announcement, yet it feels as though the line has actually surpassed expectations somehow. It’s easy to be cynical about Marvel and DC these days, but Way is one of us, after all, and hasn’t yet forgotten what makes comic books a thrilling hobby. That instinct runs through the DNA of all four of the Young Animal titles, but none have as much of his stamp as “Doom Patrol.”

Being a disciple of Grant Morrison, it only makes sense that you give Gerard Way “Doom Patrol” and let him run wild. From issue 1, everyone could see what a good fit it was. Way wrote it like a kid in a candy store: it was almost too much. “Doom Patrol” #3 was when it was clear that Way’s take on the team wasn’t going to be just a Morrisonian homage, but something expansive all its own. Way (with help from Flex Mentallo) introduces us to “Danny World”, which acts all at once as a reintroduction to Danny the Street, an origin story for Casey Brinke (our point of view through Way’s weird run), and an excuse to let Nick Derrington flex an appreciation for comic history through his art. That sequence was a bloody brilliant way of immersing us in a comic book world and will be remembered long after Way’s run comes to an end.

The artistic collaboration between Way and Derrington was immediately apparent, but again didn’t fully pay off until issue #3. Derrington, with no shortage of help from colorist Tamra Bonvillain, crafts Danny World as a vibrant Disney-esque theme park, packed to the gills with details and easter eggs. Letterer Tood Klein gets in on the action, helping to create the themepark feel and eventually reproducing several vintage cape comics homages as Casey explores her origin. And if that weren’t enough, the creative team throws a pin-up drawing of Flex Mentallo “Hero of the Beach” in the backmatter. “Doom Patrol” #3 just gives and gives and gives. 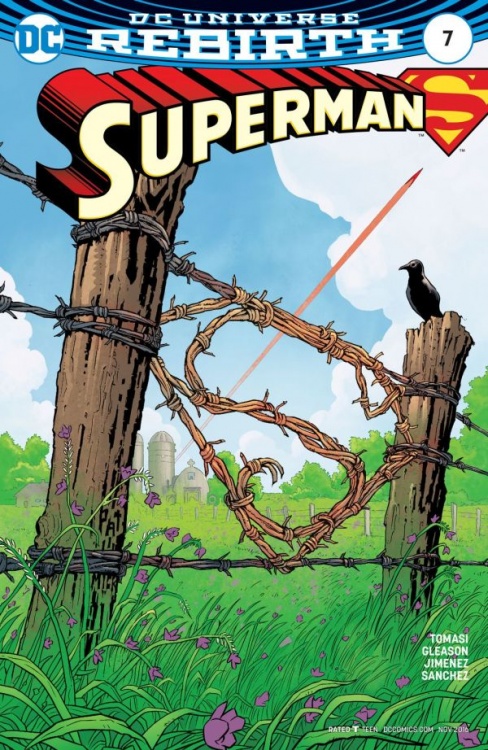 (Mike Romeo) This felt so much like a SIlver Age story. The opening recap of who Superman is and the reintroduction of him as Clark with his family read as something we don’t see too often in superhero comics any more: writing to new or first-time readers. It used to be that every issue featured a moment where characters would state who they are or what their power set is, and while writers Peter Tomasi and Patrick Gleason were nowhere near as hamfisted as that, the spirit of it was there. But why this was one of the year’s best issues goes beyond its eye towards the uninitiated, it’s all in the story for this one.

The premise is simple: Clark takes a night off to go to the county fair with Lois and Jon. There’s humor, there’s a run in with some old-fashioned local crooks, and there’s the budding story of Jonathan, the post-Rebirth Superboy. Add to all of that Jorge Jimenez’s stellar art and you’ve got yourself an issue of “Superman” that’s not only rock solid, but one of the best of the year. Imagine that! 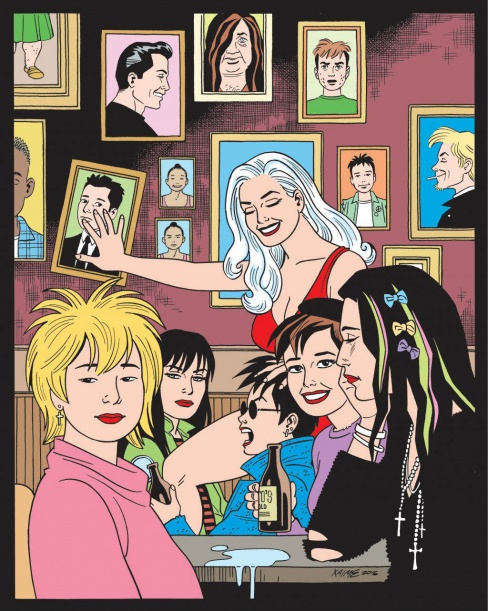 (Chris Thompson) I can still remember picking up my first issue of “Love & Rockets” back in the late ’80s. It wasn’t *the* first issue, but it was my first issue, and it was a transformative experience. That golden age, almost magazine-style format held an hypnotic quality that made me feel like I was embarking on something new … something different. I didn’t recognise that style, or that world, but I recognised those characters and what they represented. So you can imagine how that joy – that feeling of discovery – all came flooding back to me with the release of “Love & Rockets” #1 this year. I had enjoyed the collections, and I had enjoyed the somewhat annual New Stories, but I missed that original format I’d first fallen in love with. Was the magic still there? No doubt. It felt right, it looked right, and it gave me one of those rare opportunities to recapture that early sense of wonder. Was it the best single issue of the year? Well, when it can make you feel like that, then for my money it’s a resounding yes! Whether you’re an old-school fan, or someone coming at it fresh, I encourage you to tap into the magic of “Love & Rockets.” 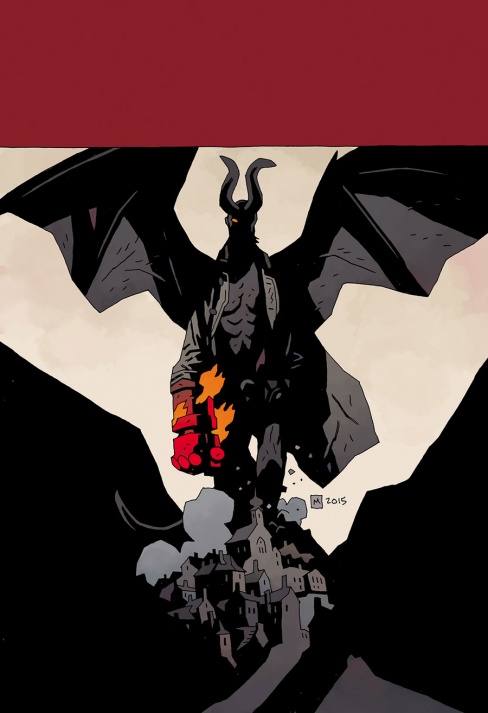 (Jess Camacho) Hellboy made his first appearance in 1994 and in 2016, his story came to an end in a beautiful and poignant way. “Hellboy In Hell” told the end of Hellboy’s life. Hellboy had died, was in Hell and the series was supposed to be an exploration of his time there. It became clear after a while that this would turn into something more and with “Hellboy In Hell” #10, Hellboy was put to rest. This final issue showed that we already saw Hellboy utter his last words. He destroys what’s left of Beezelbub’s castle and we then see a dark, shadowy and colder Hell beautifully brought to life by Mignola and Stewart. We basically see what he’s left behind on this crazy adventure and then Hellboy simply ceases to exist. He rests and it ends the story of one of comic’s most beloved characters.

In comic books, we often see death and rebirth played up for publicity. In corporate superhero comics, death doesn’t mean anything anymore, but Hellboy was always different. This was always something Mignola held on to and from the beginning, he shaped this into what he wanted it to be. Hellboy was always destined for something darker and more sinister but led his entire life doing anything but that and with this final issue, he is laid to rest after all his work is done. He stands there, in complete shadow, in the form he was always destined for and destroys it before taking his final rest. “Hellboy In Hell” #10 didn’t have a ton of fan fare behind it but it’s easily the most beautiful single issue of the year. Mignola’s choice to make these final moments in silence and in complete darkness is a genius choice. We don’t need to read what he’s feeling, we can see it. Stewart’s ability to capture this completely solitude is breathtakingly haunting and it’s the best work he’s done all year (which is saying a lot). Hellboy will continue to be featured in stories that act as prequels to this but in the linear timeline, he got a brilliant and meaningful ending. 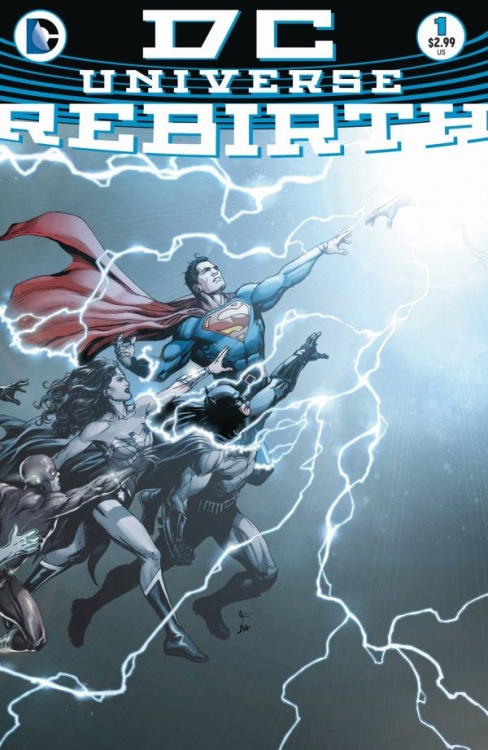 (Zach Wilkerson) “DC Universe Rebirth” #1 is, in most every way, a return to form for DC Comics. In the span of 60-odd pages, Johns, Van Sciver, Reis, Jiminez, and Frank recaptures the aspect of DC that New 52 so woefully eschewed; LEGACY. It’s a metatextual apology letter, written and drawn as a comic book. It’s pure fan service strung together by what can barely be defined as an actual story, yet it works so very well. Led by the hand of Wally West, the symbolic martyr of the New 52, we’re reintroduced to old friends; the JSA, the Legion, Ryan Choi, Jackson Hyde, etc. With Wally’s inclusion, Johns’ ability to pull at the reader’s heartstrings via nostalgia and wonder returns in full force.

At the risk of sounding hyperbolic, this issue feels like the cathartic ending of a long-running tragedy, one that finally shines a ray of hope for those standing in the wreckage. In fact, I’ve argued that this could be the perfect jumping-off point, if one were so inclined, it’s just that satisfying. It’s also fitting that this new beginning for the DCU marks a hiatus for the writer who for so long defined the course of this shared universe. Thankfully, the stories that have spun out of these pages have, for the most part, been equally rewarding and enjoyable. Still, nothing in Rebirth has yet managed to bottle that figurative lightning quite like this one-shot.

Brian: I feel very out of touch, as none of the top 5 made my personal top 10, though I enjoyed each one without question (and, in all honesty, “Hellboy in Hell” #10 absolutely deserved to be on my list. A dumb, dumb oversight on my part) . It is interesting to see DC take 3/5 of these spots with very different titles, and just how absolutely different the other two offerings were. The single issue is a weird beast for me, as I tend to think of comics not as stand-alone issues, but as 20 page pieces of a larger story. But, in that regard, I think that each of these books make a case for checking out a whole slew of other books, and none of our picks are “true” one-shots, with a beginning, middle, and end.

Matt: I think my list consisted of me recommending “Bone: Coda” five times. Like you were saying, Brian, I don’t know if it’s possible to always say one single issue of a serialized story can exist on its own. I think our staff did well in choosing things that at least stood out from the rest of the series. Or, in “Hellboy in Hell’s” case, concluded it nicely.

Mike: I feel very in touch, as three of my favorites made the list. But then I feel out of touch because of how well “DC Rebirth” #1 did. Regardless of feelings, “Love and Rockets” made the list and I couldn’t be happier.