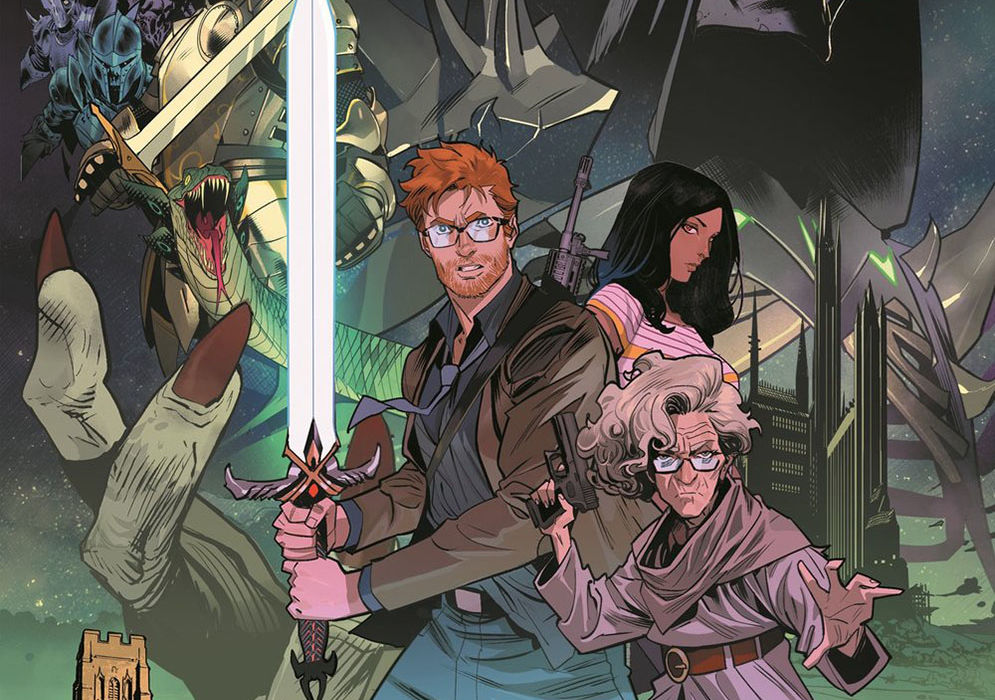 There are a lot of comics out there, but some just stand out head and shoulders above the pack. With “Don’t Miss This” we want to spotlight those series we think need to be on your pull list. This week, we’d like to draw your attention to “Once and Future” from Boom! as the sixth issue of the once mini-series and future ongoing drops this week and just in case you missed its appearance on numerous best of 2019 lists, including ours.

Who is this by?
British series writer Kieron Gillen has been on a roll. “Wicked + Divine, “Die,” and “Peter Cannon: Thunderbolt” have been recent critical and commercial darlings, and after nearly a decade of working predominately for Marvel after making a splash with his creator-owned “Phonogram” (his first foray with his “Wicked + Divine” collaborator Jamie McKelvie), he seems to have settled into the next stage of his career by producing thought-provoking and well-researched series that pull from history, mythology, and pop culture in equal measure while managing to craft darkly-tinged suspenseful stories hallmarked by big concepts perfect for the comic book medium. “Once and Future” is no different.

Costa Rican and Russ Manning Award-winning artist Dan Mora has been quickly building a reputation as a clean-lined and accomplished illustrator. His covers for the big two along with his sequential work in Boom’s “Go Go Power Rangers”, Grant Morrison’s “Klaus,” the recent “Buffy” reboot, and now in “Once and Future” may be signaling that his days as Boom! Studios’ best kept and most prolific secret might be coming to an end. His page compositions feature big cinematic panels littered with detail that reveals a cartoonist’s eye for both emotive facial expression and exaggerated but still realistic body language and an architect’s knack for believable scene setting and perspective manipulation. Tamra Bonvillain’s assured colors round out the handsome series along with Ed Dukeshire’s clean lettering style, a must in such an exposition-heavy series. 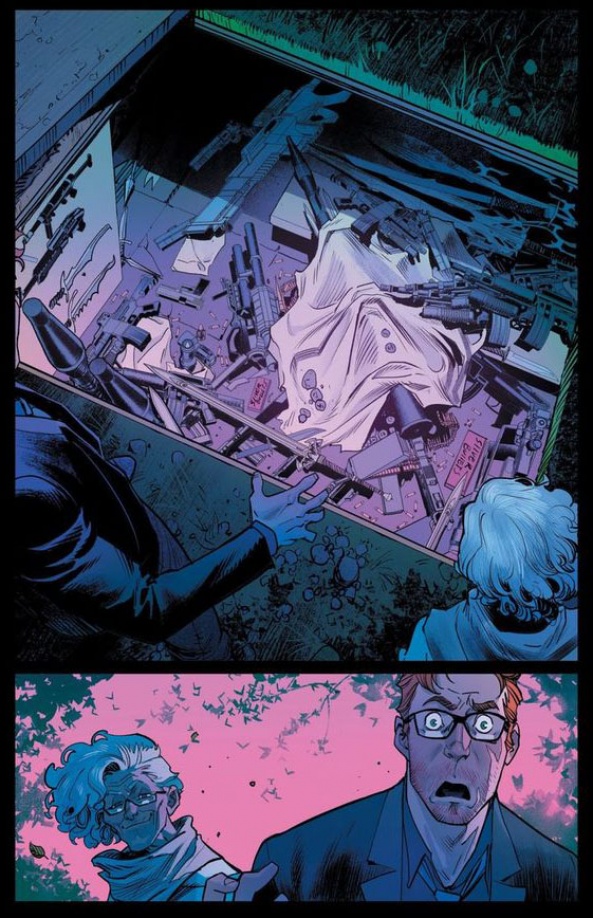 What's in the box?
What’s it all about?
The first arc details an attempt by British nationalists to revive King Arthur and is set in motion by their theft of an ancient scabbard at an archaeological site. It’s Gillen’s first clever twist on Arthurian legend, making the aforementioned scabbard that held Excalibur be the source of great magic and power. The legendary blade that it sheathed was just a loaner from the Ladies of the Lake, explains Bridgette McGuire. When we first meet the octogenarian McGuire she is not long for her nursing home in Somerset. When she goes missing from the home, her grandson Duncan discovers her and her cache of military-grade weapons in the nearby woods. It turns out that she’s kept her past life as a monster hunter a secret from her good-hearted and socially awkward grandson, but that doesn’t last long as a chimeric questing beast shows up to baptize Duncan into the family trade by fire. To complicate matters, one of those aforementioned British nationalists turns out to be Duncan’s mother Elaine, and she’s got some serious designs on creating a British new world order by resurrecting the legendary king and his knights of the round table with the help of Duncan’s younger sibling. History professor Rose, who initially seemed to be present to illustrate the extent of Duncan’s gauche tendencies, has a crucial role to play in the proceedings as well. As the nationalists’s plans quickly spiral out of control, it’s up to the newly formed trio of Bridgette, Duncan, and Rose to keep the supernatural forces at bay. 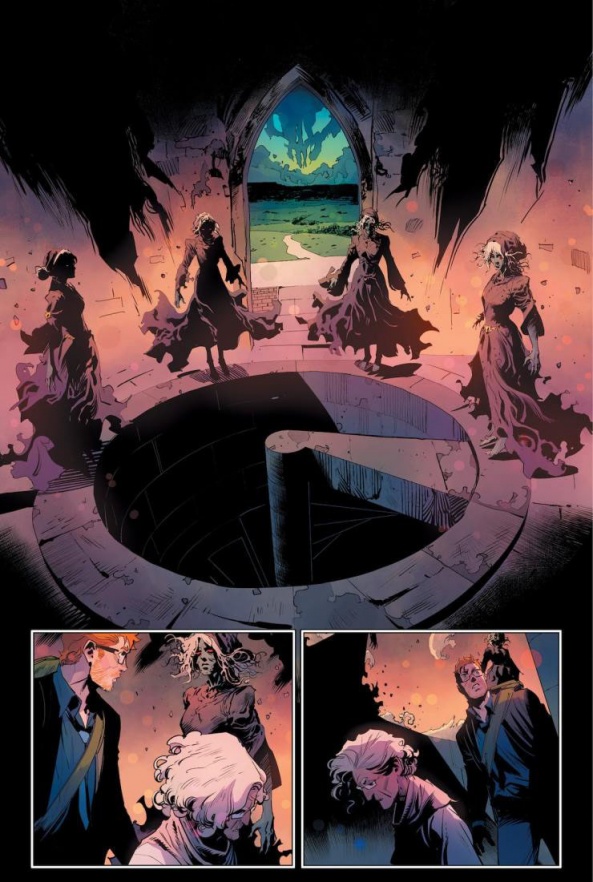 Hey, ladies!
What makes it so great?
“It’s not real. It’s just true,” Bridgette tells Rose when the latter incredulously lays eyes on roaming specters in Bath Abbey in issue three. It’s a statement that captures the essence of the series aesthetic and approach. There’s no time wasted in the narrative by endless questioning about what’s happening, which is a relief from a narrative perspective. Everything is taken at face value and explanations for the proceedings are often provided by the spry Bridgette. “Once and Future” is certainly a wordy book by design as Gillen is clearly interested in making sure readers understand what is going on rather than having them develop theories or even guess at the significance of events. It’s a refreshing take when so many writers equate withholding details as being mysterious. In that sense, Gillen leans more heavily into the horror genre rather than mystery, and there’s a lot here that might seem familiar to fans of the Mignolaverse in the way it brings supernatural history and mythology into the present day and makes it threatening, and it’s the way the characters react to the fantastical and supernatural events that provides the narrative’s thrills.Continued below

Even with the horror designation, “Once and Future” is a brightly tinged book that doesn’t rely on rivers of gore or monsters draped in shadow to get its kicks, and the dreamy art team lures you into the fantastical worlds by effortless shuttling between two planes of existence. The look of the book even seems to echo the numerous illustrated retellings and adaptations of the legend of King Arthur even as Gillen and company have found yet another fresh approach to recontextualizing the timeless material. You’ll never think of Arthur’s famous mantra to heal the land the same way again. It’s hard not to look forward to where the creative team will be taking readers, especially as the story participants settle into their expertly established and endearingly heroic roles. 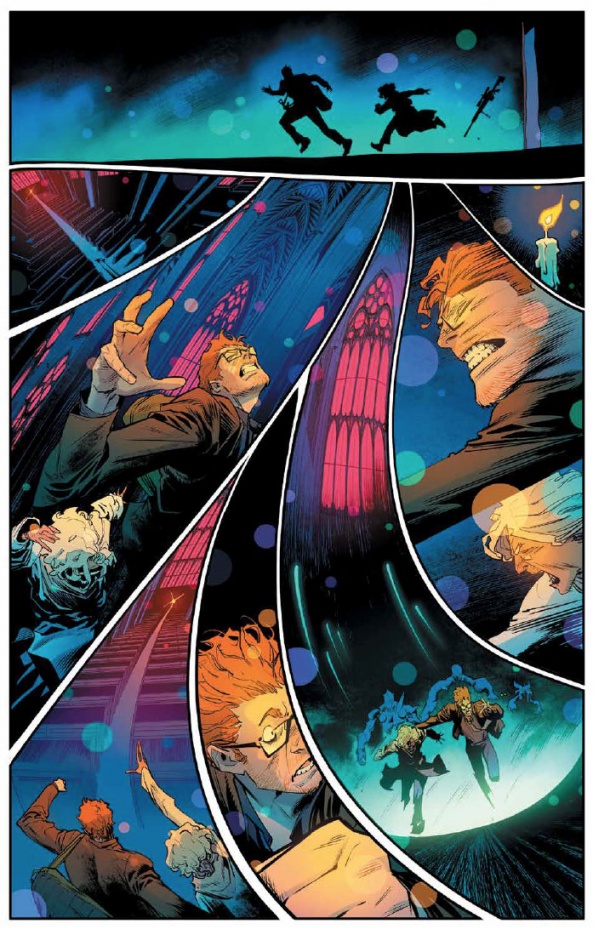 Britain's Warped Tour
How can you read it?
The trade paperback edition of the first story arc has been solicited and is due in shops on March 25, but you don’t have to wait to read them digitally via Comixology (currently at a 20% discount—even more if you’re a Comixology Unlimited subscriber). The single issues have been in high demand with the first issue earning seven print runs, so best of luck tracking down first printings of the first two issues at cover price. Along with the first collected edition on March 25, the seventh issue in the series is set to arrive in stores, and it’s a welcome thing that Gillen and Mora aren’t resting on the early success of the series to give readers the next installment. They’re striking while the iron of Excalibur is hot. 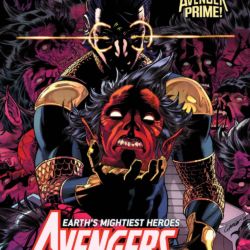 Don’t Miss This: “Avengers” by Jason Aaron and Javier Garrón

There are a lot of comics out there, but some stand out head and shoulders above the pack. With “Don’t Miss This,” we want to spotlight those series we think need to be on your pull list. This week, we’re assembling to read up on Marvel’s premier super-team, “Avengers,” as they continue through the biggest […] 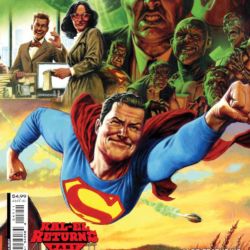 There are a lot of comics out there, but some comic book series stand out head and shoulders above the pack. With “Don’t Miss This,” we want to spotlight those series we think need to be on your pull list. This week, we’re spotlighting ““Action Comics.” “Action Comics” is devoted to fleshing out Clark Kent’s […] 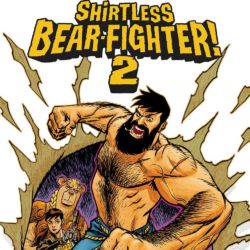 There are a lot of comics out there, but some stand out head and shoulders above the pack. With “Don’t Miss This,” we want to spotlight those series we think need to be on your pull list. This week we are taking a look at the return of a hero keeping the world safe from […]