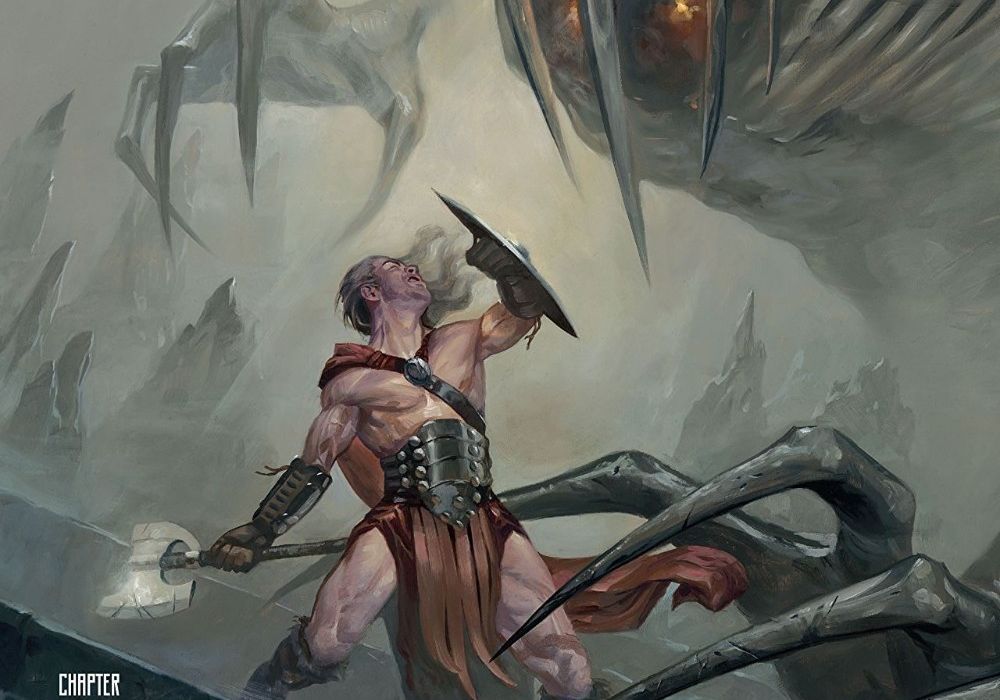 There are a lot of comics out there, but some just stand out head and shoulders above the pack. With “Don’t Miss This” we want to spotlight those series we think need to be on your pull list. This week, we look at “The Last God: Book I of the Fellspyre Chronicles” by Phillip Kennedy Johnson, Riccardo Federici, and Sunny Gho.

Phillip Kennedy Johnson is an Eisner-nominated writer who has written for stories on his own personal website as well as for individual publishers. From 2014 to 2016, he wrote the World War II-based horror comic “Lost Boys of the U-Boat Bremen,” followed after by “Killing Marcus” also on his own website in 2017. The latter turned into the first issue of the “Smoketown” limited series at Scout Comics. At BOOM! Studios, Johnson wrote “Last Sons of America” in 2015 and 2016, followed afterwards by “Warlords of Appalachia” in 2016 and 2017. For the KaBOOM! Imprint, he wrote an issue of “Adventure Time Comics” in 2017, with a short story for which he received an Eisner nomination in 2018. At Marvel Comics, Johnson is a relatively new face, with a story in 2018’s “War is Hell” #1 and two separate “Marvel Zombies: Resurrection” debut issues in 2019 and 2020, the latter leading into a miniseries. In terms of DC Comics outside of “The Last God” itself, Johnson wrote the 2018 “Aquaman” annual. Outside of comics, Johnson is also a musician, having composed music to go alongside “The Last God” that is featured in trailers released by DC Comics itself.

Riccardo Federici is most known for his work on cover art across various different publishers. Such work includes Dynamite Entertainment’s “Death Defying ‘Devil,” Marvel Comics’s “Star Wars: Empire Ascendant” #1, and DC Comics’s “Green Lanterns,” alongside a plethora of variants. However, he has also done increasing amounts of work with interiors at DC Comics in particular. Aside from the showings in “The Last God” itself, he also drew for the “Batman: The Murder Machine” #1 one-shot for ‘Dark Nights: Metal’ in 2017, and for two arcs of the Rebirth incarnation of “Aquaman” in 2018. His work is still relatively recent, with his more prominent work only stretching back to 2017, so there is likely more to come in the future.

Sunny Gho has had a variety of colorist projects across different publishers, though mostly at Marvel Comics. With Marvel, he worked on “Chaos War” in 2010 and 2011, followed shortly after by “Ultimate Avengers vs. New Ultimates” also in 2011. Across the subsequent years, he has provided colors for 2013’s “Punisher: Trial of the Punisher,” the “Civil War” miniseries during the “Secret Wars” event in 2015, the first arc of Chip Zdarsky’s “Daredevil” in 2019, and most recently to Jonathan Hickman’s ongoing “X-Men” since 2019. However, Gho has also been a colorist at Image Comics for 2012 and 2013’s “Cyber Force,” as well as for an issue of “Jupiter’s Legacy” in 2017. When it comes to DC Comics, Gho’s work has run across many titles, from “Power Girl” in 2010 and 2011, to “Savage Hawkman” in 2011 and 2012, to “Superman” during the ‘H’El On Earth’ event in 2012 and 2013, and most recently “Aquaman” between 2018 and 2020, some issues of which overlapped with Federici’s aforementioned run as illustrator. 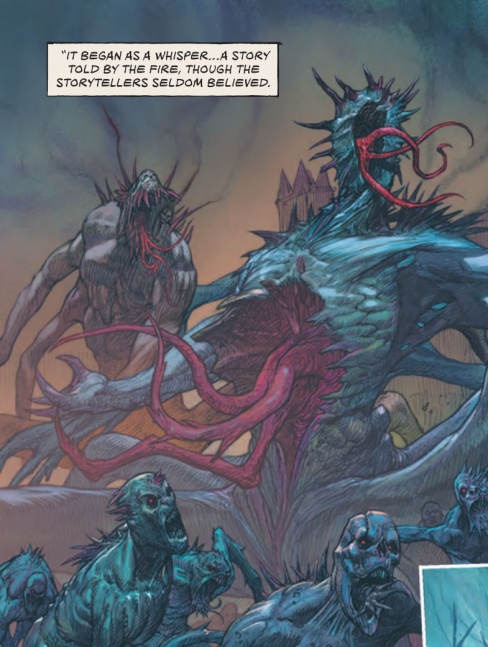 “The Last God,” professed to be the first book in ‘The Fellspyre Chronicles’ as well as being the first DC Black Label property not derived from the existing DC Universe nor connected to the Hill House Comics pop-up imprint, picks up thirty years after a band of adventurers known as the Godslayers crossed the world of Cain Anuun and ascended the divine Black Stair, fulfilling their name by striking down the gods of their world and freeing all the peoples of their fantasy-based realm of the undead scourge known as the “Plague of Flowers,” one that had turned the living into “vine, rot, ash, and defiled flesh” that is known as the Flowering Dead. Ranging from sorcerers of various arcane arts to archers to the classic swordsman, and even including a member of their crew who betrayed them all, this group fought off every last one of them, with their leader, Tyr, delivering the final blow and raising the kingdom of Tyrgolad in his honor thereafter.

Seems pretty simple, doesn’t it? The kind of thing that often is seen across fiction, showcasing fantasy archetypes. Pity it’s a lie. 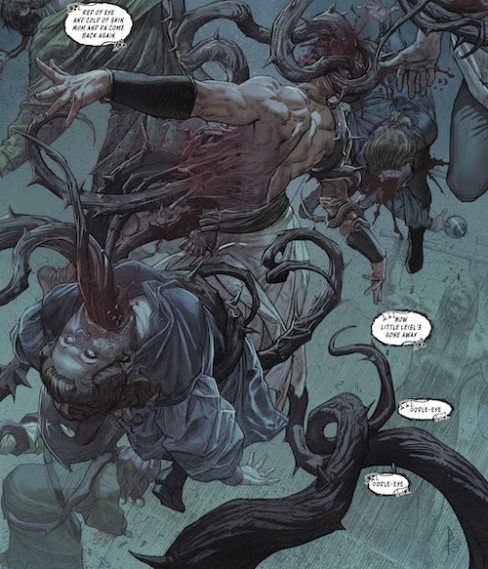 Oh, don’t get us wrong: the Plague of Flowers is an extant threat. The Godslayers did attempt to face down the gods so far as readers know. However, there was no “happily ever after.” The story of “The Last God” shows what happens when such a fantasy story is just that: a fantasy, even within a world of swords and sorcery. What if the king didn’t slay the last evil, but merely made a deal with it and lied to everyone else? What if said deal finally fell to ruin, leading to a world woefully unprepared to handle such a threat arising once more? How could such a lie have affected the entire world to create not a utopia, but a dark fantasy on the brink, even with most blind to its imminence until it is too late to stop its decay? 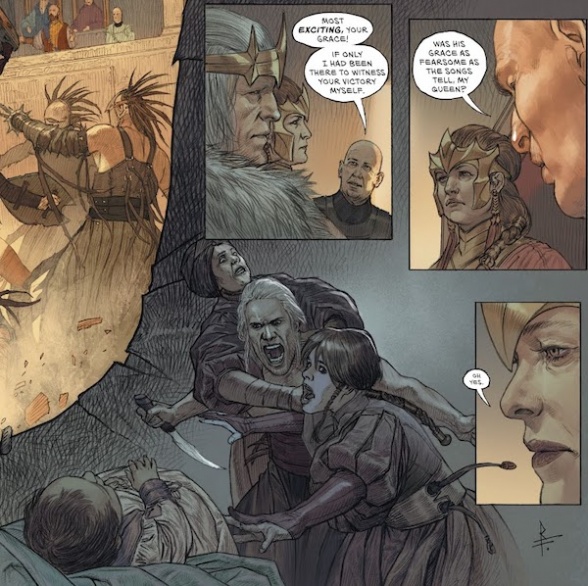 More than that, the lies are thrown in the face of the very idea of this group forming in the first place. Seeming allies hate one another or are far too self-important to trust anyone else. They may indeed have skill in their assumed trade, but they are still people, warts and all, especially when there have been thirty years since their assumed triumph.

As a new group of seemingly true heroes rises up in the face of a renewed horror, combined with several of those from ages past, can the sins of the past be overcome at all, or are they doomed to repeat the same mistakes. And even further, how deep do the lies run? If the origin of their political status quo is based on lies, how much else could be the same? 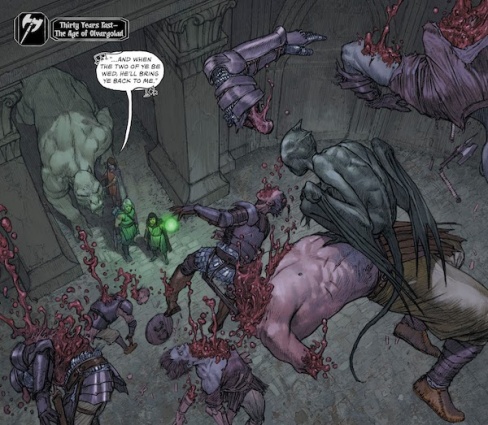 A sizable amount of the intrigue behind “The Last God” boils down to one phrase: Never meet your heroes. Former champions can turn out to be liars or traitors. Seemingly benevolent queens can turn on a dime to break their own laws in the pursuit of their own prejudices. However, be warned: if the images above did not show it enough, this comic is rated mature, and is treated as such with its contents, more along the lines of A Song of Ice and Fire or Bloodborne than happier, lighter fantasies.

Magic in such a setting is not seen as evil nor good, but a means to an end, and so rather than rely upon the classic “evil sorcerer” route, the creative team pulls together a wide plethora of archetypes and cultures, creating a vast world that is slowly uncovered through both the comic itself and the bits of lore slipped into the back of each issue.

Even without the story itself, the artwork provided by Federici and Gho is absolutely gorgeous, evoking awe or terror depending upon the situation in which the vast assortment of cultures themselves. The unique beasts of the undead-divine Flowering Dead and those other creatures faced on the path have a kind of perverse majesty to them, from dragons to demonic entities to even more mundane bears, held in deliberate contrast against the highly detailed faces of humans and their counterparts amongst the aelva (this setting’s version of elves). 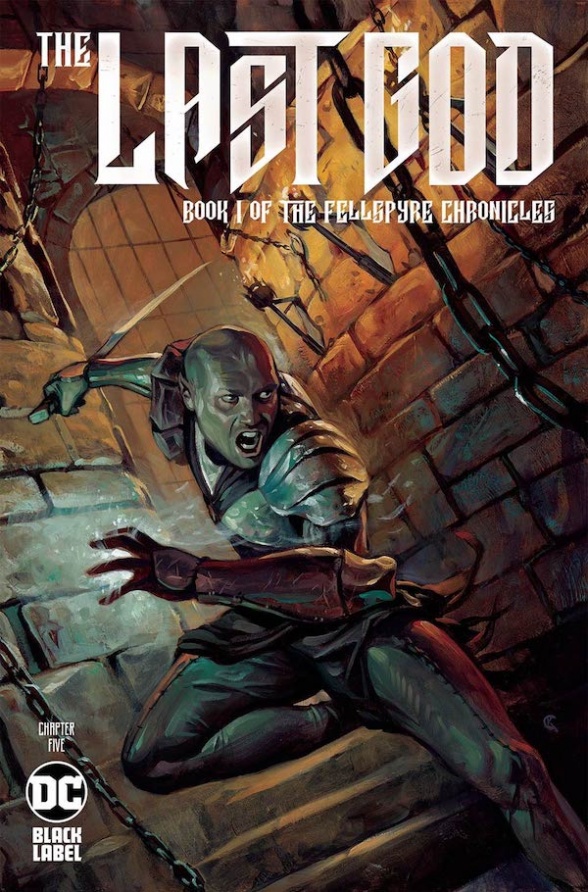