There are a lot of comics out there, but some stand out head and shoulders above the pack. With “Don’t Miss This,” we want to spotlight those series we think need to be on your pull list. This week, we look at the shape and form of the return of everyone’s favorite teens from the Super Friends,the “Wonder Twins.” 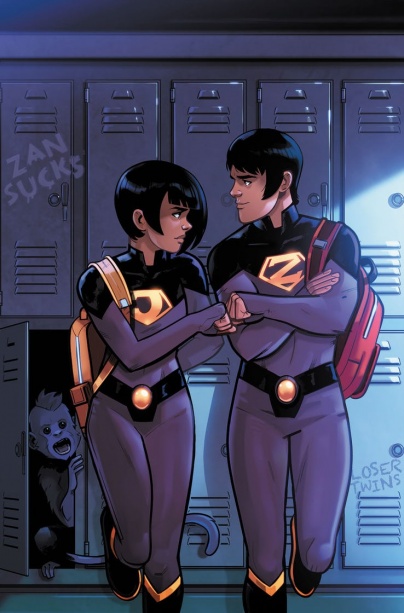 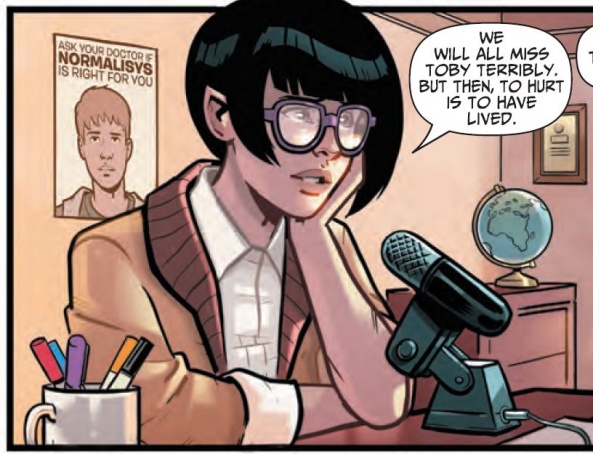 It’s the Wonder Twins! You know? They come into contact, say “Wonder Twins powers. . .Activate!” and then Jayna takes the shape of any animal and Zan takes the form of . . .water. They’re great! They’ve also been exiled from their home planet of Exxor and, after being taken in by Superman and given a position at the Hall of Justice, are now attending high school like the awkward, awkward teenagers they are.

What wacky antics will they get into this month? Will they fight any villains or just spend all their time talking to the Super Computer? Tune in, Super Friends, and find out! 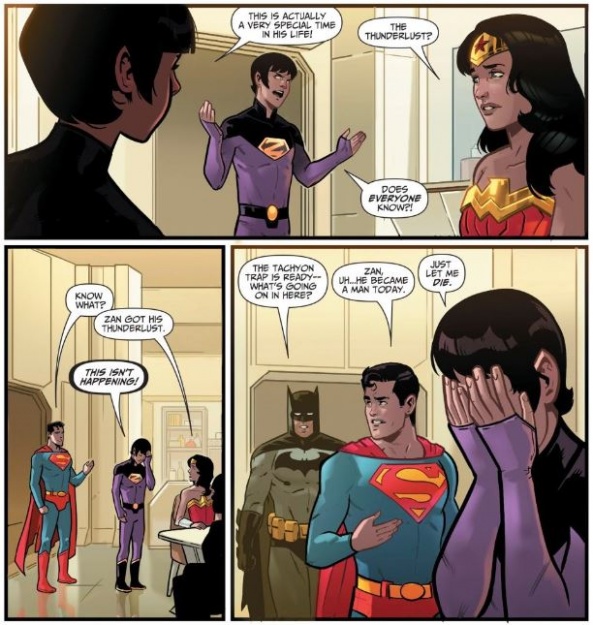 If you couldn’t tell by the jaunty description above, “Wonder Twins” is pure wonder and fun, taking the campy nature of the cartoon they originally debuted in and transposing that tone to the modern day. The Wonder Twins are an odd in that, much like Harely Quinn or Terry McGuiness, they began their life on TV before being transported over to the comics in the “Super Friends” comics. Unlike those two, however, they’ve appeared in very few comics — their biggest appearance being in “Extreme Justice.” Yeah. That one. In fact, the Wonder Twins haven’t been seen in continuity in any major way since 2003 and prior to this series, have never headlined one before. Yet, they’ve remained a cultural touchstone, even for those who never knew who they were.

As such, it is fitting that at its heart, “Wonder Twins” is a story about losers; the ones that the world makes fun of because they don’t have the flashy skills or the cool personae. It examines the dangers of the pursuit of popularity and of attempting to fit oneself to the mold that the world around us tells us to fit inside. It is a comic for and about teens as they struggle through the meat grinder that is high school. It is a comic that examines the silver age, Superfriends-esque villain of the week through the lens of comedy, rather than tragedy, all the while retaining that sharp, satirical, and oftentimes poignant core that Russell has honed over the last few years. 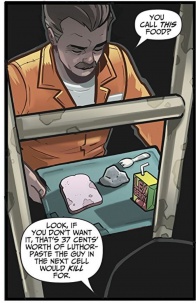 This is a comic that features Baron Nightblood aka Drunkula, first as a gag and then as a tragic failing of the judicial system and society as a whole, alongside Zan trying to make his catchphrase “total refreshment” and Jayna defeating Mxyzptlk in 5 seconds, flat, not to mention all the regular, teenage issues the two face, forming a tableau of tones that gives “Wonder Twins” its power.

It’s hard enough to make someone laugh, it’s even harder to do that consistently, in new, clever ways, and then seamlessly transition from a scene of Superman talking about the problems of the world, making you cry, to a scene of Luthor doing transparently bad things but with a humorous frame, making you laugh and then rage, as you realize how often his real world analogs pull these kind of things. Each issue, too, is mostly self-contained, making it easy to jump into while still providing a throughline for those following along from month to month.

But the series wouldn’t be nearly as fun without Byrne’s art and coloring or Sharpe’s letters. With the look and shine of a modern Saturday morning cartoon, a phrase which sadly already dates me, Byrne imbues “Wonder Twins” with energy, brightness and a simplicity that keeps the focus on the characters. Thanks to the range of facial expressions he employs, that focus keeps the narrative moving, connecting us more deeply to these two awkward, sometimes dense, but always loveable, dorks.

Byrne’s strength really lies in the way he frames scenes. Angles are chosen so as to have the biggest impact without losing fidelity in the artwork, positioning the characters in such a way that he can manipulate the tone by force of his art, letting the dialog bolster it rather than the other way around. This also allows him to juggle tones effectively and displays the wide range he can take. Byrne also keeps his paneling simple, usually between 2 and six to a page, which gives his art and Sharpe’s sfx and balloons plenty of room to breathe. 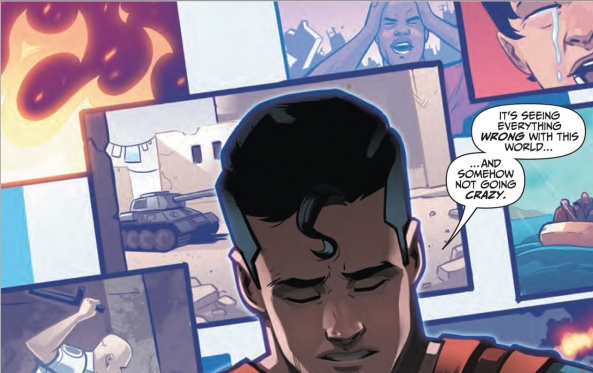 In fact, Sharpe’s sans-serif fonts channel the modernity of the comic, melting into the background for most of the comic but popping in that uniquely superhero way when needed. It’s jaunty and fun and that’s what you really want from this series. Also Gleek, the blue traumatized circus monkey and Zan’s new pet & friend.

“Wonder Twins” is silly and ridiculous, based on a silly and ridiculous concept. So, instead of making that the end of things, or trying to pull a tired “deconstruction” of the concept, Russell, Byrne and Sharpe lean into the ridiculousness, lampshading it constantly, earnestly, and with a smile. They know, and we know, and so it’s easy to go along for the ride and laugh with the comic rather than at it. In doing so, “Wonder Twins” acts as a reminder that there is power in laughter, that naivete does not equal stupidity, that kindness is the most important human virtue, and that being a teenager suuuuuucckkkksssss.

“Wonder Twins” #5, the second to last issue in the mini, comes out today in your local comic shop or wherever you get your digital comics. Track down those back issues or, for those who like to read in trade, wait until November, to experience the whole wonderful series.

Edit: Since writing, the mini has been extended to twelve issues so get ready for six more issues of this amazing series. 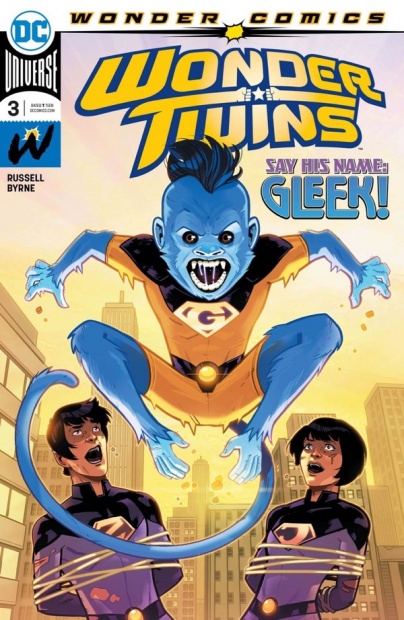