Welcome back to the Chronicles of Shazam, where I’ll be looking back on (most of) Captain Marvel’s appearances post-“Crisis on Infinite Earths.” Today, I’m going to be looking at the 1986/1987 series “Legends,” which was the pre-cursor to a lot of post-Crisis storytelling, but specifically to launch a new “Justice League” title. As I’ve already reviewed the series, I’m just going to be talking about Cap’s appearances in this book, and what it does for the character in the light of his recent DCU introduction. 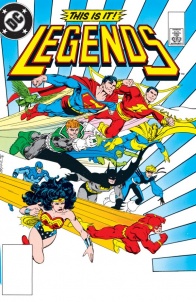 In the wake of CRISIS ON INFINITE EARTHS, the heroes of the DC Universe must find a new purpose and direction in the battle for justice! When G. Gordon Godfrey arrives on behalf of Darkseid to create a hate campaign that outlaws super-heroic activities, the world’s greatest find themselves fighting the very people they swore to protect!

This miniseries is a weird one to revisit, but it holds an incredibly important place in the DC history books, as it shepherded two very important series into existence: “Suicide Squad” and “Justice League,” later renamed “Justice League International.” But it also clearly spotlights who the most important post-“Crisis” players are, with Wally West, Superman, Jason Todd, Wonder Woman, and Changeling all seeing significant time, along with the future members of the JLI.

What is instantly noticeable about this series is the import that is put upon our ol’ pal Captain Marvel. He is instantly identified as a ‘legend’ by Darkseid, and is the first hero they target to bring down. Again, as we discussed last time, Captain Marvel is brand new to the mainline DCU, and his star had fallen quite far from his 1940s heights. Sure, he had his 70s television series, but that was a full decade before this. This isn’t a critique, it’s just interesting that this character was singled out to get a big push out of the gate.

Scripter Len Wein gives the reader plenty of expository information about Cap during his early scenes, which is good, because “Shazam: The New Beginning” wouldn’t be released until the very end of this series, in April 1987. Perhaps that is the reason that Wein decided to retell the Cap-centric events of this issue five times in six issues. I know older comics recapped a lot more than current ones do, but this gets really monotonous. Only the fourth issue doesn’t have some sort of retelling of what happened to Captain Marvel and Macro Man.

Speaking of that, what does happen is that Billy is led to believe that his transforming from Cap into Billy is what causes Macro Man to be killed. It turns out later that he was rigged with explosives, and that Darkseid foretold what Billy would do, and set this up to shake his belief in his powers.

The plan works well as, for a little while, Billy vows never to transform into Captain Marvel again, lest he accidentally kill someone else. Of all the main characters in the book, Billy is given the most to deal with, emotionally, and he is by far the youngest hero or villain in the series. It’s a lot for him to take on, but it again reinforces just how important DC thought he was at this time, which makes his relative absence in just a few months really perplexing.

John Byrne’s Billy/Captain Marvel is relatively straightforward. When Tom Mandrake takes over the character in “Shazam: The New Beginning,” he somewhat updates his look, especially facially, but Byrne’s Captain Marvel is straight out of Fawcett. At times, he looks even a little out of place alongside the other DC heroes, though most of them have pretty standard looks here. Superman is still pre-mullet, and only Black Canary is dressed in a way that isn’t instantly recognizable to modern readers.

In the third issue, Billy meets a little girl named Lisa, who acts as the voice of both children and folks who don’t agree with G. Gordon Godfrey that superheroes should be destroyed. Her character is relatively simple and undistinguished, except for her unshaken belief in the good of heroes. She gives Billy an age-appropriate ally in the book, but serves very little purpose until she leads some like-minded folks to help protect the heroes in the sixth issue.

There are some pretty goofy Cap moments in this series, but the goofiest is when he suddenly releases he’s not to blame for Macro Man’s death just by turning back into Captain Marvel. The excuse is that now he has the Wisdom of Solomon again, and so he can see through the ruse, but that seem a little simplistic, no?

But overall, this book firmly establishes Billy as a cornerstone of the DC Universe, highlighted by his membership in the new Justice League. “Justice League” #1-6 and “Justice League International” #7 will be next week’s installment of Chronicles of Shazam. Stay tuned!