Update:
IGN have a preview of the book, which is confirmed as “concern[ing] a secret cabal within the US Government that uses a series of targeted assassinations to covertly stop evildoers.” Kirkman, Gimple and Burnham will be answering questions during a livestream on the website tomorrow at 10:00 am PST. 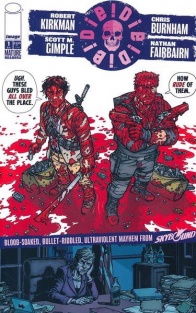 In a surprise announcement, Skybound Entertainment have announced a new comic series, “Die! Die! Die!” starting tomorrow. The comic, which is aimed at mature readers, is written by Robert Kirkman (“The Walking Dead”) and Scott M. Gimple (The Walking Dead), and illustrated by Chris Burnham with colorist Nathan Fairbairn (“Batman Incorporated”).

Little is known about the comic, beyond what can be gleamed from the bloody cover, which reveals two assassins/mercenaries and a female politician will be important characters in the series. Of course, fans won’t have long to wait to find out what’s happening in the comic, given it’ll be out in local comic book stores tomorrow.

Suddenly dropping books is nothing new in the world of digital comics, but it’s a rarity in print, where the success of a series is always measured by preorders. Skybound’s decision to withhold the comic is already drawing a lot of commentary, including from Dublin’s Big Bang Comics, which was among the stores to break the news:

You know when a while ago people were saying how impossible it would be for the comics industry to pull a Netflix and just drop a series out of nowhere without anyone having any clue about it even existing?
It just happened. Game-changer. https://t.co/VPxQBeLUQG

Doing a Beyonce in comics. I applaud. https://t.co/lpQrcj7hYF