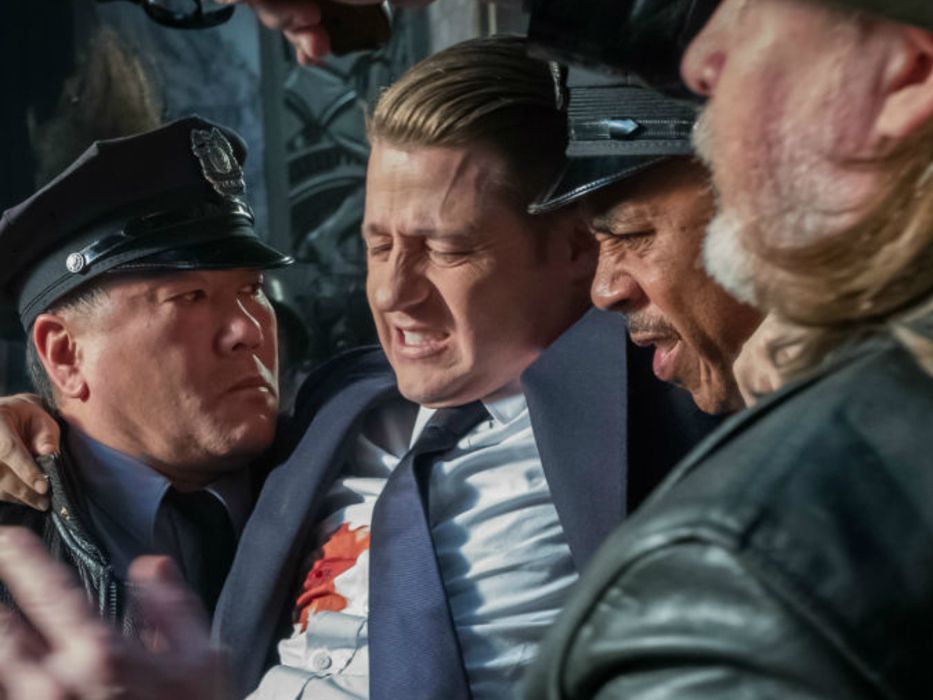 Hello, Gotham, it’s been a while. For those new to our Gotham reviews, we’ve been rotating through Multiversity staffers who may not be familiar with the show. Personally, I stopped watching a few seasons back, shortly after Penguin poisoned a dog. Exactly at that moment, actually. So given my complete lack of knowledge as to where this show has gone since then, let’s take a look at… “The Trial of Jim Gordon.”

1. The Gangs of Gotham

It may not be the biggest thing, but let’s just take a moment to look at the various gangs assembled in Gotham. We have a group of Undertaker cosplayers, gas-mask wearing folks right out of Mad Max or “Borderlands,” your typical Jokerz clowns, and a post-apocalyptic troupe that seems to have hoarded all the hairspray left in Gotham city. And they do seem to love their chainsaws.

I mean, it’s goofier than the Schumacher films, but at least it’s interesting to see.

So we get to the actual trial itself. No surprise, it’s a mental trial symbolizing his guilt as he struggles to decide if he should survive. Oh yeah, he got shot in the chest during this episode, that context is a little important.

Yet for the centerpiece of the episode, a study of the character that is Jim Gordon and the guilt he carries with him, it’s surprisingly short. There’s plenty of side plots going on, so all we get is a testimony from Leslie Thompkins, then a bunch of people he failed to save appear and it’s time to die.

I’m not necessarily saying it felt rushed… but I am saying a Power Rangers episode did the same plot and still had time for more character work in-between the fight scenes. It’s a shame, because I’d love to see more of how he balances the guilt and worry he carries with him against the responsibility he feels to the city and the people in his life, but we just didn’t get the time for that.

3. You’re Not Batman Yet, Bruce

Speaking of people carrying guilt and responsibility for Gotham City, we have Bruce Wayne! Yes, it seems like he’s finally ready to go out and undertake a training journey to become Batman, unless he stays for Selina, and assuming he can find a way out of Gotham. But then he goes and talks about how so many awful things have happened to Gotham because of him, things that happened in the seasons I missed but apparently involve Ras Al Ghul.

Look, that’s a very Batman thing to do. And the question of whether or not Batman does more harm than good with his existence is a great one to explore. Except Bruce isn’t Batman yet in this show. It’s way too soon to be bringing in all these character beats… but considering we seem to be in the middle of “No Man’s Land,” they really are just bringing in the Batman stories without actually having Batman. Speaking of which…

So when Gotham started, we met a red-haired girl named Ivy Pepper. Not Pamela Isley, just Ivy Pepper. After I stopped watching, I heard word that she’d be magically or meta-humanly aged up into Poison Ivy. Apparently that really did happen.

That… just doesn’t work. Just like how the show seems insistent on using “Batman” storylines and character motivations without actually including Batman, it’s also rushing in as many of his villains as possible without actually making them connected to Batman at all. At this point, they might as well give Jim the freaking cowl instead, since all the rogues gallery has already assembled.

Her plan really needs some rethinking as well, but she’s basically just there to carry the plot forward so other characters can learn a lesson. But at least I was amused by how Zsasz behaved while under the influence of her mind controlling perfume.

5. The Bells are Ringing

At least this episode does end on a happier note. Jim Gordon and Leslie Thompkins get married. Mazel tov to them! All it took was a near-death experience for Jim to understand what he wants in life, and it certainly sounds like the characters have gone through a lot over the past few seasons. Harvey Bullock’s speech was good enough for what it was, and the like “by the power vested in me by absolutely no one” was amusing.

Although apparently it happens after a sudden one month time skip… boy, it sure is nice how nothing important whatsoever happened in that month, isn’t it? Yep, just life as usual in Gotham… say, didn’t the episode begin with Jim saying they only have like a month or so of water left? I sure hope that got resolved in the month we skipped.

So… this is where Gotham is now. It’s certainly changed a lot since the days of “The Waynes were murdered, here’s Jim Gordon as a rookie cop and some characters before they become Batman villains.” Surprisingly, it wasn’t too hard for me to jump in as a returning viewer, even in spite of all the insanity that clearly happened over the seasons, but it doesn’t encourage me to resume watching.