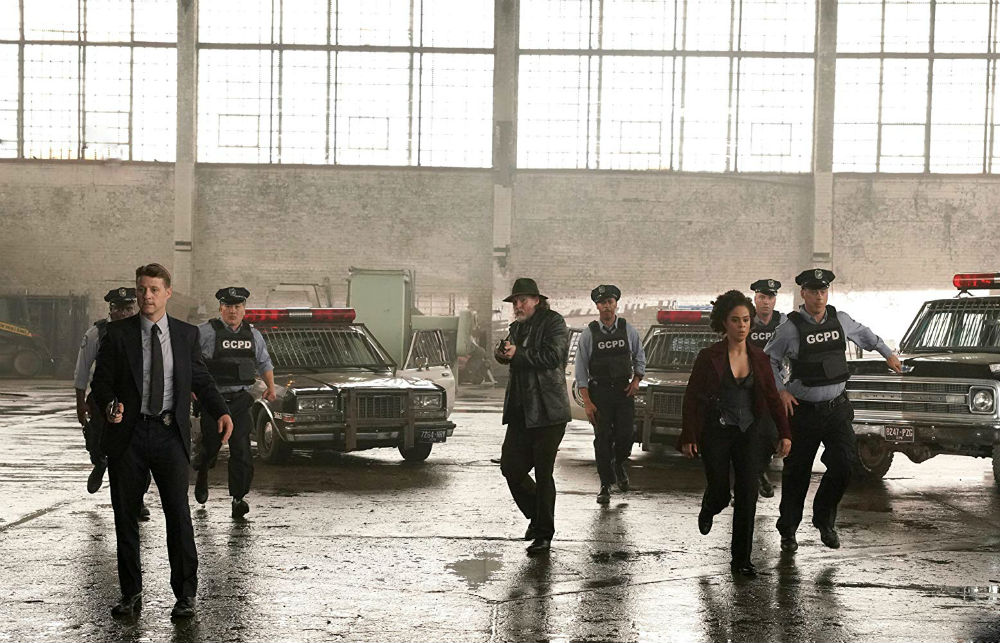 Hello Gothamites! It’s been quite a while since we last brought you our thoughts on Gotham. To be fair, we can only handle so much Gotham at once and the back half of season four may have been peak-Gotham, for good and for ill. We’re back to the rotation too, so this will be my only review (maybe) of the season. Next week, a different victim will be taking over to watch what may be their first episode of the show in forever.

But enough of my stalling! Let’s get on with the premiere of the FINAL (Thank G-d) season! And, as always, spoilers, oh my god, so many spoilers, ahead.

1. Can You Believe They Killed Bruce Wayne?

If there is one thing I’ve learned about Gotham, it’s that the writers really don’t know how to make the stakes believable and so, any threat of death or serious injury becomes empty. Let me give you an example. Gordon was shot 6 fucking times in one episode last season by Sofia Falcone and brushes it off like nothing but she takes a bullet to the gut (in the same place as Gordon) and is basically done for. . .then Lee shoots her in the head for good measure. By all accounts, Gordon should be far into the grave but because he has male plot armor, he’s all good.

Also, Lee & Riddler both died in the Season 4 Finale but somehow Riddler’s back by Strange’s hand? Where’s Lee? Is that who’s moving Ed?

My point is, the death of Tabitha and the shooting of Selina is utter horse-shit. Thankfully the previews let us know Selina makes it out okay but god damn am I worried about how they’re gonna handle that.

But first, Tabitha. Why did they have to kill her? To give Barbara, who seemed to have mellowed and become a far more interesting and three dimensional character in the 87 in-show days since the end of season 4, a rage against Penguin. . .AGAIN? Seriously. SERIOUSLY. I know the writers don’t know how to write the women of the show but was killing off ANOTHER one while every single male character of note (sans Butch) survives. They had such a good thing going with that too!

Tabitha has always been a character that’s been pigeon-holed by her desire for revenge and while this didn’t do anything to alleviate it, it gave her a focus and made total sense from a character standpoint. Problem is, by only having one episode with her in it, the whole thing is made moot and Tabitha becomes a plot pawn, a stepping stone, for someone else’s story.

I never liked Tabitha’s character, she was always wasted and very one-dimensional. She never developed, circling the drain until her reckless thirst for revenge spelled her downfall. But she didn’t deserve this unceremonious death.

No snark this time for the title because I am split on Selina’s current trajectory. Let me lay out the reasons for this. To start, this is a different take on “The Killing Joke,” which is a very controversial story that I really don’t want to delve into beyond that it was the inspiration for many events at the end of the previous season. That could work IF, and this is a big if, the writers approached this as a part of SELINA’s story, placing the focus on her, and using the reactions of Bruce & Alfred and the others as a reflection of her.

Instead, this episode spends much of the time showing how Selina’s gut shot is affecting Bruce. There are surface level gestures as to how this will affect her but with so little screen time, and almost zero screen time on her own, it amounts to little more than window dressing.

It’s insulting to the character and also undermines the character moments that are present. Camren Bicondova should be commended for her performance and deserved more time to be able to fully express all that Selina was feeling and thinking, so that when she does try to grab the scalpel, it has an even greater impact.We get glimpses, between the pain and the snark, but that is an event and a decision that must be earned in order to have the requisite impact.

They failed, hard, at achieving that and the whole suffers for it.

I have to commend season 5 on one thing: whoever they got to direct & compose the cinematography for the front half of the episode did a stellar job. I mean that with all seriousness, although with maybe less hyperbole. When the episode began, I was struck by how different it felt to the usual Gotham ways of shooting. The sets were sharper, the angles more dynamic and the tone was noticeably more measured. Parts of it were very obviously for the trailers and they really got me with the Riddler, Penguin, Gordon team-up. I was shocked and wanted to know more, which is exactly what a season opener should do.

It couldn’t last but man, for those few minutes, there was something strong in Gotham.

4. Scarie the Crow & The Duality of Rid

It’s a shame we didn’t get more Harley, I mean, Echo and Jeremiah, this week. The more restrained evil of them made for a legitimately scary villain, when compared to the sillier Jerome. He’ll be back, that much is obvious, but I do wish it was a bit earlier. Plus, that suit is striking.

That’s one thing I don’t do enough with this show: whoever the costume director is, deserves praise. Since episode 1, they’ve done an outstanding job of conveying character through clothing and making them all stand-out. Seriously, even the less inspired designs are stand-out and Oswald’s suits have always been *chef’s hand kiss emoji.*

But onto the topic at hand: Riddler and Scarecrow. Honestly, why do they keep bringing back Jonathan Crane? He’s not even remotely scary, with his NCIS kidnapper voice and dubstep fear gas. I can’t take him seriously as a threat and he’s not over-the-top enough to enjoy his presence. The backstory they gave him in the show is just OK too. It’s a shame, he could’ve been so much cooler, but instead, he’s just a guy with a sackcloth and a scythe.

Side note: I just saw the promo photos on IMDB and Scarecrow looks SO much scarier in the high contrast light of the photos. Dunno why. Maybe I’m just tired of the ultra-darkness.

As for Riddler, I’m going to ignore the confusion around his return because it’s apparent that’s where this is going, and I’m going to put 100% on the record that I think it’s Lee in his head that’s doing the moving. He is the opposite of Scarecrow in terms of watchability. I can watch Riddler freak out on roofs & in dumpsters all day long because of how much time the show has dedicated thus far to his development and the question of what is going on with him. I can’t wait to see where that goes and also whether or not he’ll end up going back to Penguin.

While I would love for Kite Man to make his grand debut, it seems that the Gotham writers are sticking more to “Zero Year” and “No Man’s Land,” which is probably for the best, considering this Riddler. This was the best decision they could have made to send the show off. By destroying the city, they’ve broken free from many of the procedural elements that held back earlier seasons and allows them to really shake up the status quo, while also providing a legitimate motivation and framework for this version of Gordon to thrive in.

Seriously, they’ve done a terrible job of making this James Gordon worthy of the praise they gave him up until the back half of season 4. Then, they began to address how shitty he is and the show’s frame changed, allowing James to grow while not being rewarded all the time. He’s faking it until he makes it and doing all he can to live up to the image thrust upon him.

On a pure plot level, I’m disappointed by how small the city still feels. We see the territories on the map but there isn’t the same street-level look that the comics had nor anything that resembles a connective tissue between factions. The machinations are standard and linear, instead of intertwined and complex. While I can’t wait to see what all the different factions are like, which is what I anticipate to happen in subsequent episodes now that the GCPD are expanding outward, it’s a wasted opportunity as of now.

Finally, why’s Bane here? I know, I know. He’s only in the previews but seriously, we don’t need ANOTHER “major” antagonist. It’s only going to crowd up an already crowded show.

Alrighty! That about does it for me. I know I can write a lot so thank you for bearing with me and for reading through this all (or for skipping to the end, whatever your preference is.) What’d you all think of the episode? Did I get anything wrong? Am I horribly out of touch? Did you have as much fun watching Bruce-Man sneak around without his Bat costume?

Let me know in the comments and we’ll see you again next week for whatever this show deems fit to throw at us. Say hi to the poor soul who’s taking over for the episode for me!

Best Line of the Night (despite it completely missing the point):

Selina: “After all the things I’ve done, what did me in was being you friend.”